His acting career includes roles in many films and television series. He is perhaps best known for playing Doctor James Atherton in Arachnophobia. 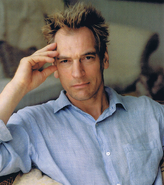 Add a photo to this gallery
Retrieved from "https://dexter.fandom.com/wiki/Julian_Sands?oldid=73349"
Community content is available under CC-BY-SA unless otherwise noted.