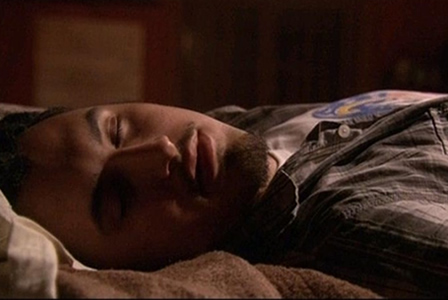 Jose Garza aka Christopher Harlow is a character in Season Two of Showtime's series DEXTER.

He was a drug dealer who with an arrest record of armed robbery, assault, and burglary. Also, Garza had killed a man named Ben "Spider" Koff and went on the run from the FBI.

Garza had purchased cocaine from Santos Jimenez, but never got it because Jimenez was killed by Dexter Morgan. Garza sends various text messages to Jimenez's phone, which is in Dexter's possession. Garza has no idea that he is really communicating with Dexter, At the time, Garza also doesn't know about Jimenez's cabin in the Everglades.

Soon, Garza learns of the cabin and its location. He sends another text threatening to go there to get the cocaine. Since Dexter has locked Doakes in the cabin, he does not want to risk Garza discovering his secret. Dexter texts Garza back and asks him to meet at Jimenez's bar.

Their meeting is not shown, only the aftermath as Dexter returns to the cabin and tosses down an unconscious Garza. Despite the protesting of Doakes, who tries to convince Dexter to let the police handle Garza, Dexter sets up a kill table. He kills Garza with a small hand saw without taking a blood slide, or waiting for him to regain consciousness. Dexter dismembers the body, but does not dispose of the remains, instead leaving them in garbage bags inside the cabin with a horrified Doakes. Garza is set up as a victim of James Doakes.

After Lila blows up the cabin, Garza's charred remains are found scattered around the ruins of the cabin. Combined with the weapons found at the scene, the FBI task force considers his body to be conclusive evidence that Doakes was The Bay Harbor Butcher.

Dexter carries a passed out Garza

Garza and Dexter inside the cabin