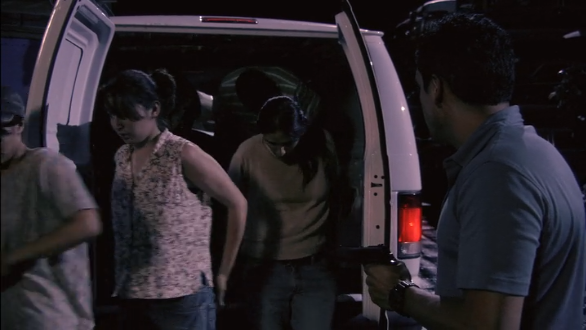 Jorge Castillo was a character in Season One of Showtime's series DEXTER.

He transported illegal immigrants from Cuba to Miami. As part of the scheme, he would raise the price after they arrived in Miami. They were held captive until Castillo was paid. If they or their families didn't have the money, they were killed.

Dexter Morgan becomes aware of Castillo's operation after Rita tells him that her co-worker's fiance never arrived in Miami after leaving Cuba. Rita asks Dexter if he will help find out what happened. After talking with an acquaintance with the immigration department, Dexter looks into Castillo himself. Dexter finds him at his salvage yard and introduces himself under the alias, "Dave Cutler." Castillo pretends that he cannot understand Spanish and says that he is American when Dexter tests him during their conversation.

While stalking Castillo, Dexter observes him living a life of luxury from the money he extorts from desperate Cuban families. Dexter takes note of his attractive wife, high-priced home, and expensive sports car.

The immigrants that Castillo recently brought over are being held captive inside a filthy garage in his salvage yard while he waits for their families to pay ransom. If a family can't pay, the person is taken out on Jorge's boat, drowned, and tossed overboard. The police assume the drowning happened while the person was trying to get into the country illegally and do not investigate further.

One night, when Castillo returns to his salvage yard, he finds a trail of lit candles leading to a trailer. He follows them inside, only to be ambushed by Dexter. Shortly thereafter, his wife Valerie arrives to the yard and, much to Dexter's surprise, she is fully aware of her husband's illegal schemes. Dexter hastily captures her as well and prepares a kill room for both of them.

Just before Dexter moves to kill the Castillos, Jorge and Valerie profess their love for one another, causing Dexter to hesitate. When Dexter asks them how they make their relationship work since they're killers, they explain that they have the same dream. Dexter then stuffs cotton into their mouths and kills them.

Because he is short on time, Dexter simply slices Valerie's carotid arteries and doesn't dismember her. Dexter later has to frame Jorge for Valerie's murder when The Ice Truck Killer, who is stalking Dexter, dives after her body and places it back in the trailer. Dexter puts blood from Valerie's blood slide on Jorge's clothes, and also plants a knife at the crime scene. 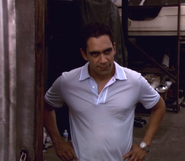 Retrieved from "https://dexter.fandom.com/wiki/Jorge_Castillo?oldid=102088"
Community content is available under CC-BY-SA unless otherwise noted.