He played Jordan Chase, a motivational speaker and the leader of the Barrel Girl Gang, in the Showtime series DEXTER.

Miller made his television debut with an uncredited appearance in Doctor Who at the age of nine in 1982. The following year he appeared in Jemima Shore and Mansfield Park. Throughout the 1990s, he appeared in various shows, including Keeping Up Appearances, Inspector Morse, Minder, Second Thoughts, Between the Lines, Casualty, Prime Suspect 3, and EastEnders Later roles on TV include appearances on The Canterbury Tales, Byron, Smith, Eli Stone, and Emma. He currently stars as Sherlock on Elementary.

Miller's appearances in theatre include roles in Four Nights in Knaresborough, Frankenstein, After Miss Julie, Festen, Beautiful Thing, and Someone Who'll Watch Over Me,

Miller was born in Kingston, England, U.K. and was raised in the south west of London. He attended Tiffin School as a child and appeared in several school plays such as The Ragged Child. He left school at the age of seventeen after taking his GCSEs to pursue a career in acting. 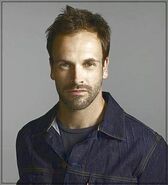