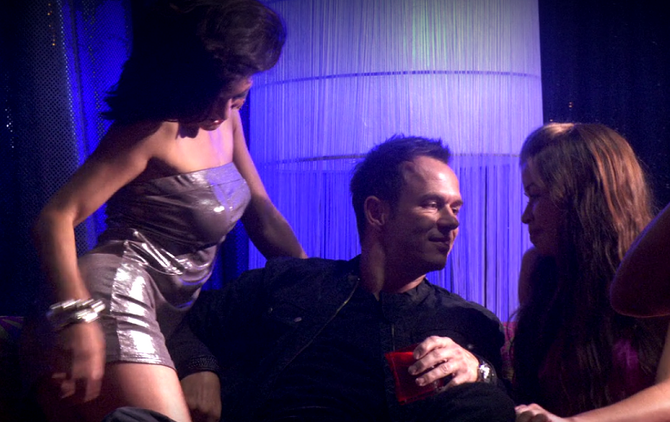 Jonathan Farrow is a character in Season Four of the Showtime series DEXTER.

He was a Fashion and S&M photographer who was suspected of murder.

Farrow was arrested on suspicion of rape in New York in 2002. The charges were ultimately dropped (according to the lead investigator of the case, the victim was most likely paid off).

His pictures were typically graphic, bordering on grotesque. Among the ones seen was a woman eating her own intestines like noodles using chopsticks. They sometimes featured women who had really been abused by him.

Farrow first appears on Dexter's radar when the severed arm of one of his models,Estrella Carazo, was found inside an alligator by Joe Nix. When he is questioned at the station, Farrow admits to taking photos of Estrella in his studio for a Jamaican rum campaign. He says the photo shoot took place last Thursday, 9:00 until noon. He then tells Debra he could make a her a star but needs to get her in his studio, whip her clothes off, and rough her up a little bit. When Dexter hears this, he decides to make Farrow a higher priority than Arthur "Trinity" Mitchell.

Dexter breaks into Farrow's studio and finds evidence (blood and a fingernail) that Carazo was beaten there. Dexter decides to snatch Farrow from a nightclub, but has to change his plan when Joey Quinn shows up, having followed him there. Dexter sends a woman to distract Quinn and he quickly slips away. Quinn is very annoyed that a "lab geek" ditched him.

During a camping trip, Dexter secretly leaves during the night and abducts Farrow from his home by garroting him until he is unconscious. He takes him into his studio, which is in the same building.

Farrow insists that he didn't kill anyone and he had only beat the women he photographed to create an artistic contrast between beauty and the ugliness in the world. Despite this, Dexter chops off his head with a meat cleaver, dismembers him, and dumps his remains into the Gulf Stream. He then returns to the camping site, not realizing that one of the boys had noticed his absence.

The next day at work, Dexter learns that Angel Batista arrested Farrow's assistant, Timothy Brand, for the murder of Carazo on air-tight evidence -- surveillance photos and DNA. In spite of Farrow's despicable personality, Dexter is left shaken because Farrow didn't meet the Code of Harry.

When Farrow goes missing, Miami Metro Homicide speculates that Timothy Brand killed him and fed him to alligators.

Dexter breaks Farrow's blood slide, and later tells Arthur Mitchell that he killed a man in a "hunting accident."

Farrow is told someone threw up in his car