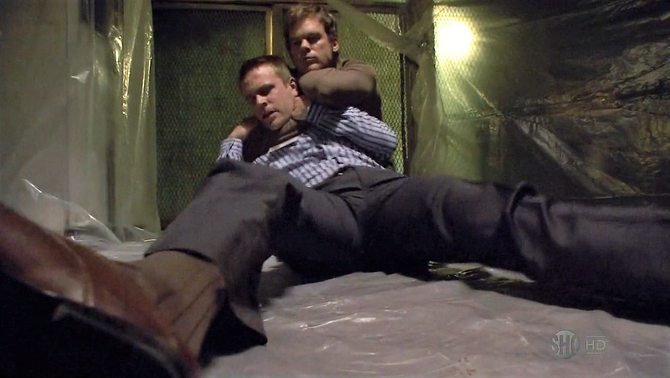 Joe Walker: Murderer of His Wife

Joseph "Joe" Walker is a character in Season Six of Showtime's series DEXTER.

He is a former high school quarterback that attended Alan B. Shepard High with Dexter Morgan and Joe's own wife, Janet Walker.

Joe is a tall, Caucasian American male with bright blue eyes and brown hair. When attending the class reunion, he wears a white blazer and dress pants, along with a dress shirt and dress shoes. Later, in flag football, he wears a pair of gym shorts and a white sleeveless shirt with black along the shoulders. A distinguishing characteristic is a tattoo of Jesus Christ on his left pectoral muscle.

He has some notable qualities in the athletic department. As a football player, he has a muscular physique and is fit to handle lengthy sessions of the sport. He has amazing reflexes as well, being one of few individuals to ever anticipate and prevent Dexter from injecting him with a needle. However, his fighting abilities are much inferior to Dexter, who is well-trained in martial arts.

In high school, Joe enjoyed his reputation a a football star, but he embodied some violent aspects to his personality. Back then, he was in a relationship with Janet Walker, somewhat of a friend to Dexter Morgan and he took out his rage by abusing her, often leaving bruises along her arms,

Joe cruised on his fame in school and expects to be as popular during the school reunion. While people do meet and greet him, a hint of jealousy begins to form when all the attention begins to focus on Dexter Morgan, due to his interesting career, his attractive appearance (compared to former classmates), and the tragedy of his wife's murder.

Later, Joe admits to Dexter that he killed Janet and faked it as suicide because he sought a way out of an expensive divorce. This both infuriates and puzzles Dexter, who feels that Joe's abuse of Janet likely forced her away. When Dexter reveals Joe's tattoo of Jesus Christ on his left pectoral muscle, Joe struggles to find words to describe his reasoning behind his actions. Dexter orders him to find a relation for the murder to his lord and savior and Joe seems a bit dumbfounded. As his death nears, Joe strongly advances his love for God and proclaims that he is a "mighty fortress," and nothing can hurt him. This is shortly proved wrong by a sledgehammer to his forehead.

Joe, a former quarterback, went to Dexter's high school. At the time, Joe dated a classmate of Dexter's named Janet McKellin. She was a sweet, caring person who looked at Dexter in a way most others didn't...as a friend. Joe himself barely noticed Dexter's existence and focused more on his football career, as well as keeping Janet within his tight grip of a controlling relationship. Nevertheless, they married each other shortly after high school and moved out of state.

Three years before Dexter's 20th high school reunion, Janet Walker was found dead in their house. The police ruled it as suicide.

When Dexter learns of Janet's suicide, he is skeptical due to the dried blood underneath her fingernails that couldn't be hers. Because of location differences, Dexter never investigated Joe, but plans to do so at the class reunion. Anticipating Joe's arrival, Dexter sharpens his class ring so that he can prick Joe's hand and obtain a sample of his blood to analyze back at his lab.

Finally, Dexter gets a chance to walk up to Joe, intending to shake his hand (in order to obtain blood). This backfires when Joe uses the greeting of pounding two fists together which forces Dexter to prick his own hand. The two talk a bit, with Joe acting like he wants little to do with Dexter. Joe eventually recognizes Dexter, and refers to him as the "lab geek" in somewhat of a mocking manner.

Dexter tries to find out Joe's feelings concerning Janet, with Joe showing little grief over his wife's death. Instead, Joe expresses anger that Janet left him, in the context of her dying, when it was actually going to be divorce.

Suddenly, Joe notices Trisha Billings, an attractive former classmate. He mentions his regret at not tapping that in high school. When Dexter reminds him that he was seeing Janet at the time, Joe stares at him with a look that suggests he would have cheated. In an attempt to get close with Trisha in the present, Joe makes his way over to her. (Dexter himself has a sexual encounter with Trisha...quite unexpectedly.) Joe later jumps for joy at a chance to sleep with Trisha when sent a fake text by Dexter in order to lure him into a trap.

Dexter, frustrated that he didn't get the opportunity to test Joe's blood, finds an alternate solution -- a nearby signup sheet for flag football. It suggests another chance to get in close to Joe and collect blood. Of course, this requires Dexter to first learn how to play football. Both men soon meet on the field, along with former classmates. Much to Dexter's disappointment, his lancet becomes busted and he is forced to take other measures. Dexter elbows Joe in the face and uses a towel to dab some of the blood from his nose, succeeding in his mission despite Joe's anger..

Confirming the blood to be a match, Dexter plans how he's going to kill Joe. The original plan is to grab Joe after a couple of drinks and persuade him to go outside where he'd "M99 him." The plan changes when Trisha Billings confronts Dexter in a school hallway. Displaying an attraction to him, she pulls Dexter into the classroom of one of their former teachers. Dexter, who is preoccupied with taking care of Joe, tries to work his way out of it but she strips and begins to perform fellatio on him. Afterward, Dexter slips her phone out of her purse and uses it to lure Joe to a kill room in the groundskeeper's shed.

The plan works and Joe enters the shed but, as Dexter attempts to inject him with M99, Joe's quick reflexes prevent it. He slips out of the attack to place himself at a vantage point where he can see his attacker. Joe throws some angry lines at Dexter, and Dexter responds in what seems like riddles to Joe. He accepts the challenge to fight Dexter, but doesn't realize just how combat oriented Dexter is. Joe is quickly overpowered and put in a choke hold that forces him to pass out.

When Joe awakes, he is on Dexter's table, scared and confused like most of his victims, and begs to be let free. The two converse, with Dexter questioning Joe's reason to kill Janet, to which Joe admits it was simply over divorce. Angered and somewhat perplexed by this response, Dexter asks if it was his only reason for killing her. Joe explains that he didn't want to end up broke because of the divorce.

Dexter, dealing with the question of religion in his mind, reveals Joe's Jesus tattoo on his chest. He asks Joe what Jesus would have done, would God have supported this? Joe babbles various different excuses, claiming that God would forgive him. Knowing his life is in danger, Joe states that God wouldn't forgive Dexter for killing him, however. At this point, Joe is stuck between trying to find a way to prevent Dexter from killing him and answering Dexter's inquiries about religion. He starts to sound more and more crazy with his explanations. Dexter grows tired of it and smashes Joe's skull with a sledge hammer. Likely to insure that he's dead, Dexter also brings his blade up and stabs Joe in the heart, as per the normal ritual proceedings.

Joe's body is discarded per usual method and, due to the fact that Joe lives in a different state, his disappearance isn't much to worry about.

Dexter and Joe at class reunion

Joe irked by the attention Dexter is receiving

Dexter texts Joe under the guise of Trisha Billings

Dexter takes Joe's life
Add a photo to this gallery
Retrieved from "https://dexter.fandom.com/wiki/Joe_Walker?oldid=111857"
Community content is available under CC-BY-SA unless otherwise noted.