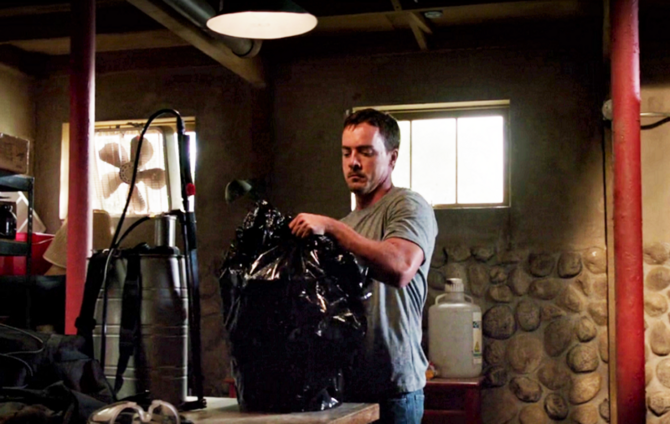 Joe Jensen aka The Phantom Arsonist

At age twelve, Joe helped his friend, Bobby, set a fire in their school's gym, in which Bobby died. Joe was sent to juvenile detention for six years. While there, he burned up his roommate's bunk bed, In 2006, he was sent to a psychiatric facility until 2012. Through the years, Joe blamed Bobby for being locked up since the fire had been his idea. When Joe was released, he began to burn people alive, and leave behind a message: Bobby.

Joe Jensen aka The Phantom Arsonist is a character in Season Seven of the Showtime series DEXTER.

He was a killer who burned his victims alive.

Dexter Morgan dubbed Jensen as "The Phantom Arsonist" after he noticed a void in the scorched area surrounding the first two victims, with the name "Bobby" mysteriously written in soot.

When he was twelve, Joe helped his best friend, Bobby Hamilton, set their school's gym on fire, in which Bobby was inadvertently killed. When the fire was over, Joe was caught by the police and sent to a juvenile facility for six years, while blaming Bobby for it. During his time at juvie, he would often fight with the other children.

Two years after his imprisonment, Joe set his roommate's bunk on fire. His privileges were suspended for two months and he was forced to live in an individual room with higher supervision.

Joe was sent to a psychiatric facility for six years.

He was released, a month before the fires started.

The first arson victim is thought by arson investigator Phil Bosso to have died by self-incineration (a form of suicide).

At the second crime scene (in an elevator), Dexter Morgan notices that a void is present in the soot and suggests that someone was responsible for the man's death. The word "Bobby" is marked in ashes.

The third shown crime scene is in the restroom at a restaurant, killing a mother and her young daughter.

Angel Batista interviews Jensen at the police station because he is a janitor at the "Y" in Brickell Bay where the Phantom Arsonist set the first fire. Jenson says he didn't see anything while he was making rounds that night until he saw the fire trucks.

The fourth shown crime scene is a bus that Jensen sets on fire which kills three people.

Initially, Dexter suspects Investigator Phil Bosso to be the killer, but clears him. He then tracks down Joe Jensen in a juvenile database, by using his fingerprint from the bus.

Dexter sets up a kill room in Jensen's house and almost kills him, until he realizes that both he and Joe and blame their killings on childhood trauma. Also, he had promised Debra that he wouldn't take a another case from her. Dexter then cuts Joe loose, knocks him out, and anonymously calls the police. When Debra arrives at the scene, she realizes that Dexter had left Joe to be arrested.

Jensen when he was a teenager

Jensen being interviewed by Angel Batista