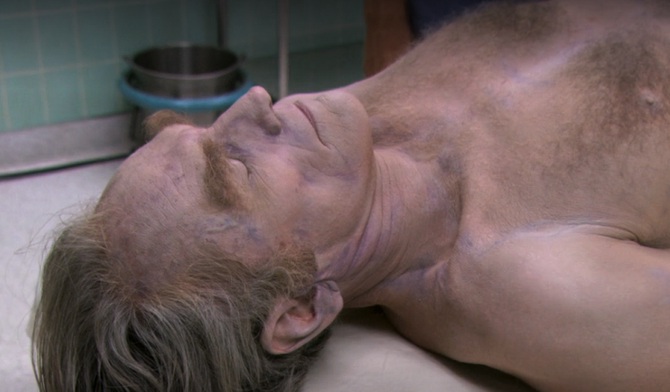 CFG Industries
Joe Driscoll is a character in Season One of the Showtime series DEXTER.

He is the biological father of Dexter Morgan. His exact relationship with Laura Moser (Dexter's biological mother) is not made clear, nor is it confirmed whether or not he is also Brian Moser's father.

Joseph Driscoll may not be his real name as Dexter found no records of his existence before age 30.

According to Dr. Pittman, Joe was in the U.S. Army and served in the Vietnam War, although there is no proof of this. (Dexter told Dr. Pittman that Joe spent some time in prison because of his tattoo.)

In 1976, Joe settled in Dade City, Florida, after buying his house outright with cash. Before that, they are no records of his life before age 30 nor any childhood photos. His life appeared to start when he was 30-years-old. Dexter speculated that Joe spent in prison, mixed with some bad people and had to hide from them.

While staying at his house, Dexter learned that Joe was an expert bowler and had recovered from drug abuse. Irma Holt, Joe's neighbor across the street, thought he was too young and healthy to die and how he was a nice man who would clean her gutters.

At the age of 60, Joe met his demise when Brian Moser schemed to reconnect with his long-lost brother, Dexter. He tracked Joe down and accessed his house while disguised as a cable TV repairman. Brian slipped Joe a sedative and injected him with diabetic insulin, which caused Joe to have a seizure and die of cardiac arrest.

Dexter is notified of Joe's death, becomes executor-of-his-will, and inherits his house and possessions. Dexter initially thinks it's some some sort of mistake because he believes that his bio dad died when he was a child.

Dexter and Rita drive to Dade City to sort out Joe's house and sell it. Once there, Debra Morgan and Rudy Cooper show up unexpectedly to help them.

The next morning, Dexter goes to the morgue to meet with Dr. Pittman who rolls out Joe's body. Dexter denies that Joe is his father, until he recognizes the spider-web tattoo on his right elbow. A memory surfaces from his past.

(Flashback) Dexter is young and, having injured himself, is in the hospital after. He needs surgery but he has a rare blood type. Harry, his adoptive father, knows someone who has the same blood type. At first Harry resists, but his wife Doris insists he contact the donor and Dexter receives a transfusion. Afterward, Dexter draws a handmade thank-you-card for the donor, and Harry promises to make sure the donor gets it. (The donor, who turns out to be Joe, kept the card through the years.)

Dexter secretly takes blood samples of himself and Joe and sends them to Vince Masuka to perform a DNA test. It comes back a match which surprises Dexter and upsets Deb. Deb believes Joe Driscoll must have been unsavory which is why Harry did not want Dexter to know anything about him and she wants nothing to do with him and hopes Dexter would agree with her.

Dexter suspects that Joe's apparent heart attack was actually murder. However, the body is cremated before Dexter can obtain proof. As such, he never discovers Rudy's involvement.

During the night, Dexter breaks into the morgue and steals Joe's ashes. Rudy picks him up and convinces him not to throw them away. Joe is then laid to rest by Dexter (accompanied by Rudy) at the entrance of Joe's favorite bowling alley where he scatters the ashes.