Her directorial debut with the 1994 short film On Hope earned her an Academy Award nomination for Best Live Action Short Film.

Williams was born in Houston, Texas, and attended Jones High School, from which she graduated in 1966. In 1970, she graduated from Pembroke College in Brown University in Providence, Rhode Island, intending to become a child psychologist. Instead, she turned to theater. She trained at the Trinity Repertory Company, taking voice lessons to neutralize her Texan accent. Then she moved to New York City and began to appear in television series in the mid-1970s. 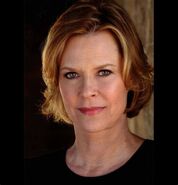 Add a photo to this gallery
Retrieved from "https://dexter.fandom.com/wiki/JoBeth_Williams?oldid=101034"
Community content is available under CC-BY-SA unless otherwise noted.