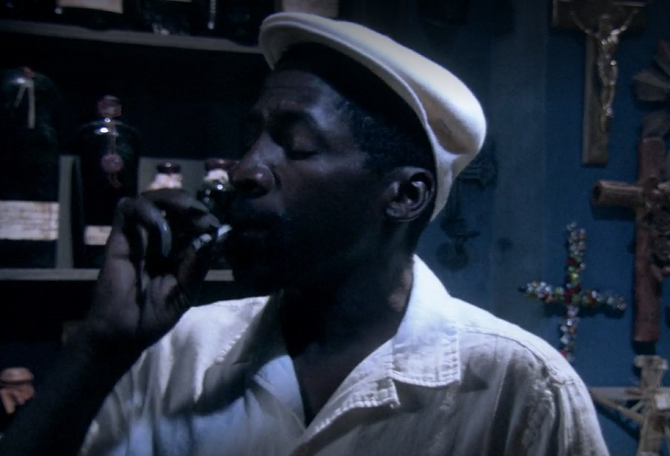 The Man with God in His Mouth

Brown, with a white milky covering

He said that his spirit Madoli told him to commit the murders, but he really did it to increase his business and reputation.

Jimmy Sensio is a character in Season Two of Showtime’s series DEXTER.

He is a blind voodoo high priest nicknamed “The Man with God in His Mouth." He owns a shop were he sells potions, herbs, amulets, talismans, dolls, candles, and sacrificial chickens.

Jimmy was hired to perform death curses on three people. To make his curses come true, he secretly put ricin powder in Aguardiente drinks and sold them to the customers. Each of the “cursed” individuals died of respiratory failure with fluid in their lungs.

Since murdering his brother five weeks previously, Dexter has been followed by the suspicious Sgt. James Doakes and thus cannot satisfy his urge to kill. Trying to act relentlessly normal, Dexter goes bowling almost nightly with his co-workers. Finally, Doakes takes a night off and Dexter has an opportunity to kill Jimmy Sensio, his next planned victim.

Jimmy: “What do you need?”
Dexter: “I need to, uh, curse someone.”
Jimmy: (laughing) “What kind of curse?”
Dexter: (locking the door), “Death curse.”
Jimmy: (no longer smiling) “We don’t do that kind of thing here. You can go down to Little Haiti, find all the Hoodoo Voodoo you need there.”
Dexter: “You are Jimmy Sensio, High Priest, right? (hands him a large wad of bills)... The Man with God in His Mouth? I’m not a tourist. I need a Petro curse, and I heard you were the best.”
Jimmy: (thumbing through the cash) “Thank you for your offering. Come.”

Jimmy leads Dexter through a curtain into a back room where there are cages of live chickens, strings of colored lights, candles, and religious items. As Jimmy places the money on an alter, Dexter injects him with M99 and sets up a kill room.

When Jimmy awakes, he asks what is happening. Since Jimmy’s blindness prevents him from seeing the photos of his victims, Dexter describes them to him, explaining it is part of his death ritual. As Dexter collects a blood slide, Jimmy employs theatrics. He changes his voice and claims to be possessed by a vodun spirit while cursing Dexter, who is unphased and simply smacks him and tells him to knock it off. Jimmy finally admits to killing the three people, claiming that his spirit Madoli told him to poison them.

Dexter covers Jimmy’s mouth with tape and raises his knife to kill him. However, Dexter suddenly suffers from a form of "performance anxiety" as a result of killing his own brother. He is unable to kill Jimmy and lands the blade next to Jimmy’s head. Since Jimmy is blind and doesn't know Dexter's face or name, he lets him go, telling him that the experience was a warning.

Later, when Dexter brings Little Chino to Jimmy’s shop, it's mentioned that Jimmy had fled town.

Jimmy takes Dexter into a back room

Jimmy places money on an alter

Jimmy pretends to be possessed by an evil spirit

Dexter is unable to finish the deed
Community content is available under CC-BY-SA unless otherwise noted.
Advertisement