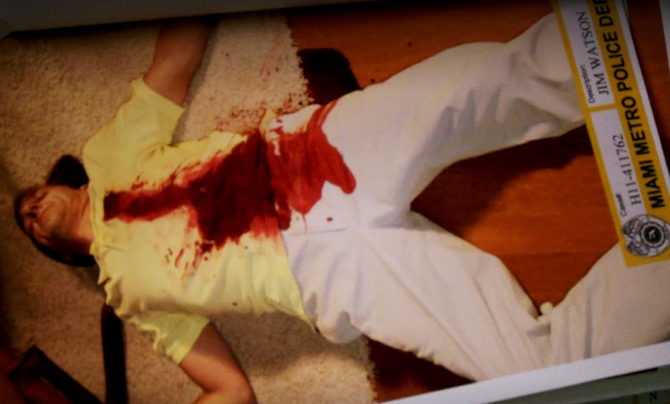 The Angel of Death (Corpse)

The Angel of Death (Corpse)

He was married to Kaitlyn Watson, and was killed by her when she caught him cheating. At the time, they were living in a beach house.

Jim began cheating on his wife, Kaitlyn Watson, at an unknown time. She eventually found out which led to a tragic set of circumstances where both of them ended up dead.

The police are called out to their beach house and find the dead couple. They then call Homicide. Detective Mike Anderson is sent to investigate with assistance from Forensic Blood Spatter Analyst Dexter Morgan. At the scene, Mike initially thinks it's a double murder, and Dexter mentions the wounds on the husband's body (three gunshots - one to the chest, two to the stomach). There is also a cut on his face, which Dexter calls a "glancing blow."

Dexter finds the man's cell phone under the couch and determines from the photo of the husband with a nude woman on it that the wife is likely responsible for the deaths. This is confirmed when Dexter lifts the wife's body and finds the gun used to kill both her and her husband.

After the case is solved, Lieutenant Debra Morgan moves into their house. She makes as deal to pay only three fourths of the normal rent, due to the difficulty the landlord could have in finding a tenant due to the murders.