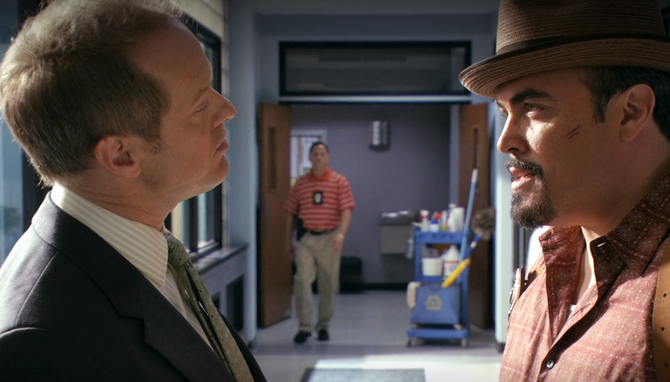 Jim McCourt is a character in Season Five of the Showtime series DEXTER.

He is an Internal Affairs investigator who worked on a case between Sergeant Angel Batista and Sergeant Lopez.

McCourt is nearly six feet tall and has short reddish hair. He regularly wears a suit and tie. At one point, Batista, thinking that Lieutenant Maria LaGuerta is having an affair with him, asks Debra Morgan if she finds him attractive. Debra responds that she would rather put a campfire out with her face than date him.

McCourt is a by-the-book kind of officer, shown when he is working on Batista's bar fight case. He is also rather manipulative, by having Maria LaGuerta help him with a sting involving Detective Stan Liddy before he will drop charges against her husband.

After a bar fight between Angel Batista and Sergeant Lopez of the Sheriffs department, McCourt appears in the Homicide Dept. to inform Maria LaGuerta that Lopez had collapsed on duty and was taken to the hospital with internal bleeding. Because of his condition, Lopez had decided to press charges against Batista. McCourt tells LaGuerta that two eyewitnesses saw Batista kick Lopez while he was on the ground, which is considered assault with a deadly weapon. LaGuerta becomes visibly upset when McCourt says that Batista could not only end up up losing his job, but could serve time in prison.

LaGuerta forces a reluctant Batista to visit Lopez in the hospital and apologize to him. Although Batista persuades Lopez to drop the charges, McCourt is unwilling to close the case that easily. He tells Angel that since he committed assault and battery against a fellow officer, it's now up to the department, not Lopez, whether charges are dropped. LaGuerta interrupts their conversation and takes McCourt into her office. Laguerta sticks up Batista, telling McCourt that it was just a bar fight and she wants to know how they can end this. McCourt replies that he is more interested in what started it. He says that, according to Lopez's deposition, she gives the best blow job in Miami and asks if that should be in the official police report. LaGuerta appears to be taken off guard by his comment. Batista watches them from outside the office, wondering what they are talking about.

McCourt promises LaGuerta that he will drop the case if she helps him nail a dirty Narcotics cop named Detective Stan Liddy. She agrees and they begin meeting to coordinate a plan. Batista, however, is unaware of the sting and assumes they are having an affair. He tracks them to a motel, looks through a window, and breaks into their room. They berate him for almost ruining an operation and explain the situation to a bewildered Batista.

McCourt not ready to close the case

LaGuerta and McCourt leave station together, observed by Batista
Add a photo to this gallery
Retrieved from "https://dexter.fandom.com/wiki/Jim_McCourt?oldid=105597"
Community content is available under CC-BY-SA unless otherwise noted.