Her boyfriend used a gun
Jenna used a swimming pool

To obtain her family's inheritance
Jenna Lincoln is a character in Dexter Early Cuts, exclusive to the Dark Echo episodes.

She was meant to be one of Dexter Morgan's earlier victims, however, Peter Thornton copied Dexter's style and killed Jenna first.

Jenna is a 20-year-old attractive woman, with long brown hair and a perfect figure.

She is utterly selfish, greedy, and compassionless gold digger. She first coerced her boyfriend to kill both of her parents...then she herself caused the drowning death of her only sister, in order to solely inherit her parents' estate.

When Jenna was a little younger, her parents were murdered by a late-night intruder who was later revealed to be her boyfriend. The boyfriend confessed that she put him up to it. Officer Harry Morgan believed him, but the jury didn't. Less than a year later, her older sister suspiciously drowns in a pool, leaving Jenna the sole heir to the estate. Dexter realizes that she is indeed responsible for the deaths of her parents and also the death of her older sister, and decides to kill her.

He stalks Jenna for a while to learn her daily routine, then makes a move, only to realize that she has been taken by someone else. He finds a note telling him to go to 973 145th St. Apt 5H. Dexter arrives at the place, but it's empty. When he looks out the window into another building, he sees Jenna gagged and wrapped in plastic. A man (Peter Thornton) then copies Dexter's kill method and stabs Jenna directly into her heart. Dexter, realizing that someone has been watching him, rushes over to the site and cleans up.

Dexter identifies Peter and confronts him on a pier. Although killing Jenna was not against the code, Dexter doesn't want a sidekick. He warns Peter to stay away. Dexter even considers disposing of Jenna's body in a public place with Peter's fingerprints on her. However, Peter ignores him and goes on to kill an innocent campus guard. Dexter is forced to end Peter's life.

Dexter waits for Jenna to go to bed 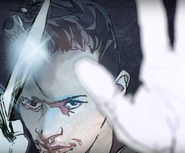