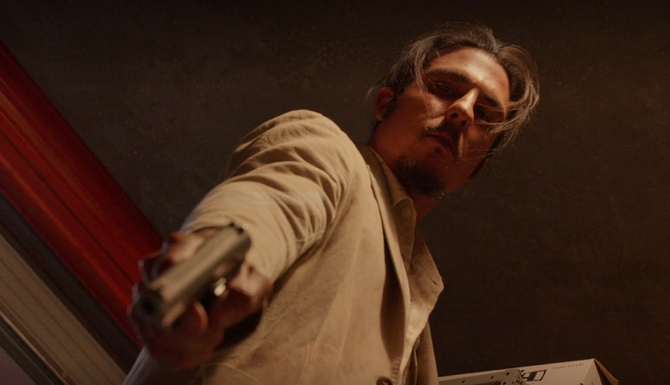 Javier Guzman is a character in Season Eight of the Showtime series DEXTER.

He's a hit man who goes by the alias "El Sapo."

He is a tall, physically strong man with long, brown hair that is tied back. He wears a beige jacket, light-colored shirt, and long white trousers.

Guzman targets Andrew Briggs after Briggs robs a jewelry store owned by organized crime. In order to get close to Briggs, Guzman poses as a fence, and offers to buy the jewels. Since no one else is willing to buy-them, Briggs meets Guzman outside his motel room and shows him a bracelet. Now that Guzman has verified that Briggs still has the jewelry, he arranges to return with the money. (Actually, his plan is to kill Briggs once he has the jewelry).

Meanwhile, Dexter discovers that El Sapo is a hit man with an extensive criminal record. He attempts to warn Debra that she is in danger.. He drives to the motel in Fort Lauderdale where she is staying with Briggs, but she refuses to leave. Briggs and Dexter engage in a physical fight in which Dexter kills Briggs in front of a horrified Debra. Despite these circumstances, Debra manages to take a key from Briggs' body. She covers for Dexter, telling police that she doesn't know who killed Briggs.

Guzman is in his car outside the motel when the police arrive on scene. He realizes that Briggs is dead and he cannot obtain the jewels from him. However, he takes note of Debra and decides to follow her.

Debra notifies her employer, Jacob Elway, that the key belongs to a storage unit. Meanwhile, Guzman stalks Debra, hoping that she will lead him to the jewels. Debra goes alone to the storage unit and searches it, finding the jewels in a drawer.

Suddenly, Guzman shows up, disarms her, and the two engage in a physical fight. Guzman, much stronger, subdues Debra and brutally kicks her three times while she is on the floor. He aims his gun at her but doesn't pull the trigger, claiming that he doesn't kill people unless he's paid to do it.

Guzman leaves her in the unit, pulls down the door, and takes the jewels to his car. He puts Debra's gun in the glove compartment, and sits there for a few minutes, checking a cut on his face. While his guard is down, Debra approaches with her second gun and shoots at Guzman four times, only twice hitting him (not shown). Debra goes home and falls asleep on her couch.

At the crime scene, Dexter finds Debra's blood on Guzman's car and confronts her. At her request, Dexter switches out her gun (that was found in Guzman's car) from evidence lockup at Miami Metro Homicide.

El Sapo outside the motel, waiting to talk to Briggs

El Sapo with cut on cheek after fight with Deb
Community content is available under CC-BY-SA unless otherwise noted.
Advertisement