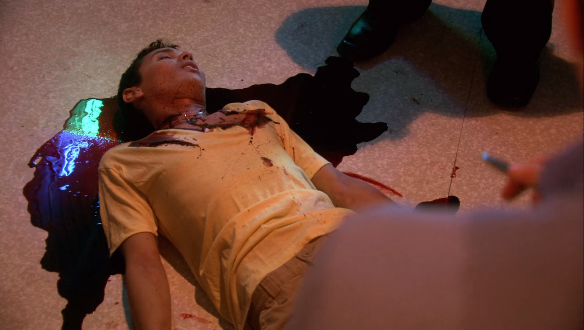 Jason Riech is a character in Season One of the Showtime series DEXTER.

He was a teenager that fell victim to Jeremy Downs.

Dexter spares a young murderer named Jeremy Downs, believing it unlikely that he will kill again.

The body of a young man is found in a public place. As Dexter is demonstrating castoff blood patterns, Sergeant James Doakes and Detective Pullman arrive at the scene. Doakes threatens to submit Dexter for psychiatric evaluation. Dexter explains what he's doing and describes the murder as an execution. Doakes is skeptical because the kid was an honor roll student and editor of his high school yearbook.

As Dexter stares at the body, he realizes that he's seen the same type of wounds before...on Jeremy Downs' victim.. Doakes asks Dexter if he's getting a goddamn hard-on. Dexter simply chuckles.

To rectify his mistake of sparing Jason, Dexter decides to kill him. As he's stalking Jeremy in a park, Doakes and other officers rush past him and arrest Jeremy.

While Jeremy is in jail, Dexter questions him on why he killed Jason. He says that he wanted to feel something, as he normally feels nothing. Soon after, Jeremy takes his own life by cutting an artery.

Name confirmed to be Jason Riech

Jason in database for moving violations
Add a photo to this gallery
Retrieved from "https://dexter.fandom.com/wiki/Jason_Riech?oldid=108629"
Community content is available under CC-BY-SA unless otherwise noted.