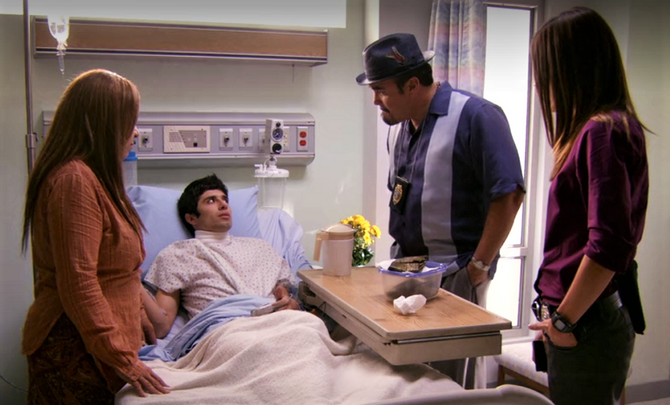 Jandro Mendoza: Victim of a Slashing

Jandro Mendoza is a character in the Showtime series DEXTER.

He is an attempted victim of Carlos Fuentes, who survives the attack thanks to Debra Morgan.

During the raid on the Fuentes' apartment, Debra Morgan is shown a large hole in a closet by a frightened man. Upon going through the hole, Debra observes Carlos Fuentes holding a machete to Jandro's neck. Carlos instructs Debra to say "Clear" over the radio, which she does. Carlos then slits Jandro's throat and manages to escape through a window. As the paramedics take Jandro away, Debra orders them to "not let him die."

Debra and Angel Batista visit Jandro in the hospital and he remembers an "eye tattoo" on Carlos Fuentes' hand. The tattoo turns out to be a hand stamp from Club Mayan, which is then put under surveillance by police.

Jandro draws the hand tattoo
Add a photo to this gallery
Retrieved from "https://dexter.fandom.com/wiki/Jandro_Mendoza?oldid=105133"
Community content is available under CC-BY-SA unless otherwise noted.