View source
watch 01:01
Who is Jamie Batista?
Do you like this video?
Play Sound 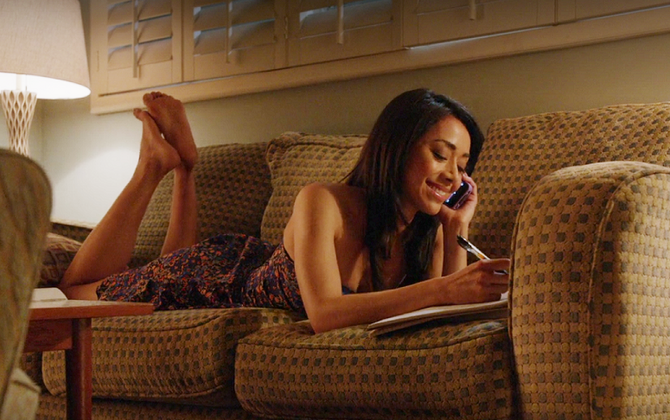 Nanny for Harrison Morgan
College student
Jamie Batista is a character in the Showtime series DEXTER.

She is Dexter's new nanny for his son, Harrison Morgan, in replacement of Sonya.

Sergeant Angel Batista is her brother.

Jamie is an attractive, young, Latina woman in her early 30s, with a bright smile and petite build.

According to an interview with actress Aimee Garcia:

"She's super fun. She's cool, sassy, sexy and smart. She a Florida girl!!!! who moves to Miami to attend school — she's studying child psychology so being the nanny is the perfect job for her and she's actually very good at it. Harrison really takes to her and she kind of let's things roll off her back. She's the kind of girl you'd want to hang out and be friends with — she's carefree and kind of a lively Cuban spirit. The first time you see her, she's in a bikini." [2]

She respects Dexter as her boss, and they usually do not have conflicting schedules. She also loves watching Harrison and views him as a fun child. At times, she doesn't get along with his sister, Debra. This is due to Debra's potty mouth and the graphic photos she lays out when Harrison is around. Dexter did agree with Jamie about this.

Although she loves her brother Angel, he is overly protective of her. Once, she jokingly calls him "Dad." Regardless, she was rather pleased when he defended her from an intoxicated Joey Quinn at Debra's housewarming party.

Later on, Jamie becomes involved with an intern at Miami Metro named Louis Greene. Approaching her when summoning up the courage, he flirts successfully and catches her interest. Unfortunately, Angel isn't too fond of Louis and even goes so far as to "subtly" warn him to leave her alone. Masuka aides Louis in this situation saying that Jamie can deal with her brother, that he should go for it anyways (with the usual sexual pun included). This results in Jamie going to his apartment, somewhere where very few people are allowed in...and the two sleep together, securing their romantic interest in one another. However, Dexter discovers that Louis has been cheating on her with a hooker while he was figuring out how to get Louis out of his life, due to his meddling in his personal affair. To keep Louis from wrecking his life (and not let him hurt Jamie from cheating on her more), Dexter makes copy the video diary of Louis with his hooker and send it to Jamie. She sees it and becomes devastated from Louis's betrayal prompting her to lash at him for lying to her and her belief she may have gotten something from him and angrily left breaking some of his collections saying she never wants to see him again, officially ending their relationship.

While attending a grad school in Miami, Jamie works as a nanny, looking after Harrison. At times, she has conflicts with Debra due to her mouth or with Dexter about Harrison and work. When she goes to Dexter's work one night, she meets the new intern named Louis Greene and seeing his computer skills and his flirts towards her, they eventually start dating. However, when Angel warns him to leave her alone, he doesn't after a talk with Masuka and he takes her to his apartment where he shows her some geeky things and eventually have sex in his bed, starting a serious relationship. She later becomes impressed with Dexter stopping the Wormwood, stating it's great to work for a hero. When Dexter is almost killed by Travis, he arrives by shore the next day and Jamie picks him up believing he "fell out" of his boat when he was out, calling him very lucky.[3]

Jamie appears first in Season Seven taking care of Harrison like usual. She later sleeps at Louis's home and defends Dexter from his insults about his opinion of him, unaware that Louis had stolen Dexter's charge card numbers and canceled his credit cards. Following Dexter having been forced to stay at Debra's home due to her knowing who Dexter really is, Jamie would watch Harrison more, but isn't mad about it and Dexter seems to have worked around her schedule again. When Dexter wanted to get Louis out of his life after discovering he killed his credit cards, he would discover that Louis has been cheating on her with a hooker and Louis taped the whole thing, which Dexter would make a copy and anonymously mail it to Jamie. Jamie would arrive at his apartment after she received the tape, having already been heart-broken by his betrayal and crying. While he tried to explain that happened before they met, Jamie knew he was lying stating he's wearing the shirt she bought him for his birthday. He tries to explain it's not cheating if you pay for it and she just calls him a pig and angrily throws the remote at him and stating if she catches something from him she'll kill him. When she says how she got the tape, Louis says Dexter sent it but she doesn't believe him and when he tries to say he's been ruining his life she calls him crazy, storms out breaking some of his collections and says she never wants to see him again, leaving a frustrated and enraged Louis at Dexter's meddling (an irony since Louis was the one who messed with Dexter first).

Jamie appears in the very first scene of the season premiere, helping Dexter look after Harrison at Maria LaGuerta's memorial dedication. She is then seen having sex with Quinn just before her brother comes home and unknowingly interrupts them. Next she is shown dropping Harrison off at the station with Dexter - who has forgotten those plans - and then again when Dexter shows up at Quinn's place seeking information on Deb's whereabouts. Jamie tries to hook up Dexter with his neighbor Cassie Jollenston, but to no avail.

Quinn later breaks up with Jamie because he is still in love with Debra.

Jamie and Harrison at the beach