It’s an educational institution in the small town of Iron Lake, N.Y. in which Harrison enrolls.

On Harrison’s first day of school, he and Jim (Dexter) meet with Principal Strode. She inquires why Harrison's grades went from a 3.8 down to a 1.2, then back to a 3.0 in just one year. Dexter can’t explain it, so Harrison tells her that after his stepmom died, he was placed in the foster care system, and had moved from Argentina to Miami. Strode seems displeased with Jim's lack of involvement in his son’s life.

Tess Silvera, the science teacher, enters the room. After she and Harrison speak some Spanish to each other, Principal Strode informs Jim and Harrison that Ms. Silvera will be administering Harrison's placement exam to determine his grade level.

Later, Harrison sees Zach and his friends laughing in a school hallway. Zach shows him a meme message to Ethan Williams in which Zach pretends to be an interested hot girl. They watch Ethan’s reaction as he receives the seminude photo. Harrison says that it's "fucked up."

Dexter is called to meet with Principal Strode and he's told that Harrison did exceptionally well on the test. However, the school thinks that he cheated when Tess left the room. Dexter says Harrison should retake the test to prove that he didn't cheat, but that idea angers Harrison, who thinks his long-lost father should be sticking up for him. When Harrison retakes the test, he does even better than the first time.

During lunch at school, Harrison sits down with the nerdy boy. He tells Ethan that he's being catfished by Zach and that his internet girlfriend isn't real. Ethan gets revenge by sending a photoshopped meme of Zach having sex with a goat. Embarrassed, Zach tries to hurt Ethan but Harrison physically intervenes and warns him to back off. Audrey steps in to give Harrison a ride home.

Harrison sits alone on the schools bleachers as he scrolls through a list of serial killers in Molly Park's Merry Fucking Kill podcast. He stops at the Trinity Killer, listens to the grim details, and sees a picture of his mother, Rita. He gulps and stares off into space.

Dexter is alerted of a school lockdown in which Harrison is involved and he speeds to the school. Upon arriving, he sees Ethan Williams rolled out on a stretcher with a bandaged leg. Officer Teddy Reed rushes Dexter to Harrison, who is being treated for a stab wound in his side. Harrison assures Dexter that he’s okay and Alan, a paramedic, confirms that the injury isn't deep. Harrison claims that Ethan stabbed him when he wouldn't go along with a school shooting. When he tackled Ethan to get the knife, he cut the boy's leg. Harrison tearfully asks if Ethan is going to die, claiming that he never meant to hurt him like that. Sergeant Logan finds Ethan's disturbing drawings and a "kill list" in his backpack.

Dexter doubts Harrison's version of the events and goes to the school to make sense of it. Deb argues that Harrison is a good kid who is nothing like Dexter. However, when he and Deb act out the stabbings, the blood patterns confirm that Harrison attacked Ethan first and then stabbed himself to sell his story. Deb asks why Harrison would do that, and Dexter thinks Harrison wanted to know what it felt like to stab someone.

Harrison is considered a hero because it's thought he prevented a school shooting by Ethan.

The students on Ethan's kill list gather in the auditorium and are addressed by Principal Strode: “Coach Logan, or should I say Sergeant Logan, is here with us today in his official capacity to talk to you because you were on Ethan's list. Listen up.”

Logan walks to the podium. "What's up, Coach?" Zach shouts as the other kids hoot. Logan tells them to settle down and begins speaking: "Um... first of all, I want to say how proud I am of how you all handled yourselves during a situation I obviously wish you'd never had to experience. You acted with... maturity and courage. Uh, but please be understanding of yourselves, or - or any of your friends who are going through a tough time in the aftermath. Counseling is being offered to each of you. It's a scary thing to be targeted like that. It's good to talk about it, how you feel. Uh, I'd like to open this up to anyone who'd like to share their concerns or... or ask me any questions."

Zach suggests a shout-out to Harrison for "saving all their asses" [cheering and applause] and Logan tells Harrison they are grateful he is part of their community.

Harrison stands and responds. "I mean, I don't really know what to say. Um, I'm glad no one got hurt."  Scott interjects, "Except Ethan." [laughter]

Harrison continues: "You-you know, personally, I don't really hold anything against Ethan. I mean, yeah, he, uh, he planned to do something terrible. And he ended up stabbing me, but, uh, you guys picked on him for years. You-you beat him up, made fun of him. You kind of made his life hell, you know? And I guess it's like, yeah,  ...yeah, we're all victims, or whatever. And I know everyone's saying that Ethan was a-a-a psycho or a-a monster or something, but he was definitely also a victim. So... I don't know. I guess we all have two sides to us. Maybe we're a little bit hero and a little bit, I-I don't know, monster. It's all about which side wins out in the end."

Dexter attends a wrestling match between Iron Lake High School and Moose Creek High School. Tess motions for him to sit with her in the stands and she asks how Harrison's therapy is going. Kurt walks into the gym and inserts himself as an unofficial assistant coach. When Logan tells Harrison that his opponent, Jeremy, made it to the semifinals at the state championships last year, Kurt assures Harrison that he will win it this year.

When Jeremy plays dirty by headbutting, Kurt advises Harrison to unleash his anger. The match resumes and Harrison overpowers and pins his opponent. Then, despite Jeremy's surrender, Harrison intentionally breaks his arm. Chaos erupts in the gym. My son's dark side makes a very public appearance. Again, Dexter thinks.

Kurt praises Harrison and says he's proud of him. Furiously, Dexter approaches Kurt and orders him to "give it a rest." The two almost come to blows on the gym floor but Logan breaks it up. Adam, a Moose Creek wrestler, warns Harrison that he better watch out.

As Dexter and Harrison exit the school, Dexter asks his son if Kurt told him to hurt Jeremy before he broke his arm. Harrison seems surprised that Dexter picked up on that. Before they can talk further, Dexter’s phone rings. When he cuts their conversation short and answers it, Harrison again feels unsupported by his father. The call is from Angela who tells him that she needs "Dexter Morgan not Jim Lindsay.

Kurt brings Harrison to the high school and gains entry by using his spare set of keys. Harrison is a little concerned but Kurt jokes that there are no security cameras since they're only reserved for tracking deer. They look at Matt Caldwell’s old trophies and Harrison is impressed that he lettered in three sports.

Then, using a pitching machine, Kurt teaches Harrison how to play baseball. Harrison persists in trying to hit curveballs even though he sustains multiple bruises. Afterward, Kurt invites Harrison back to his cabin for venison because he's never tried it.

Nashoba Regional High School was used as the filming location.

Zach and friends show Harrison the pic sent to Ethan 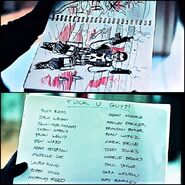 Kurt teaches Harrison how to bat

Harrison's bruises from being hit by balls
Community content is available under CC-BY-SA unless otherwise noted.
Advertisement