Ice Truck Killer Case is a police investigation in Season One of the Showtime series DEXTER.

It involves a series of killings of prostitutes who were drained of blood and dismembered.

After Maria LaGuerta falsely accused Tony Tucci of being the Ice Truck Killer, as well as embarrassing Captain Thomas Matthews on local television, she was demoted to the rank of Detective. A replacement was soon brought in by Matthews named Esmée Pascal. Even though Matthews tried to falsely convict Neil Perry for the Ice Truck Killings, he suffered almost no consequences. Debra Morgan was labeled the "Woman Who Slept With The Ice Truck Killer" which caused problems in her life, both professionally and personally.

The case was officially closed when Rudy Cooper's true identity -- Brian Moser a.k.a. The Ice Truck Killer -- was revealed. 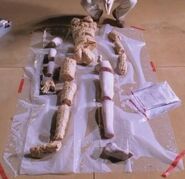 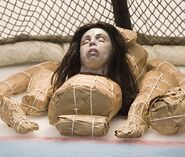