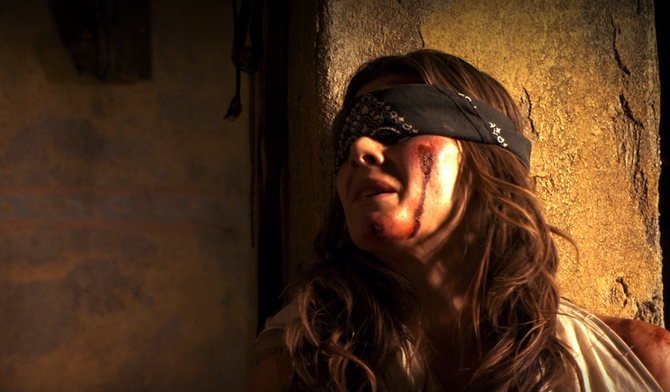 The Angel of Death

Talk to the Hand (corpse)

Holly Benson is a character in Season Six of the Showtime series DEXTER.

She is a victim of The Doomsday Killer. Although she was kidnapped in order to be sacrificed in The Whore of Babylon Tableau, she was released; however, she was later recaptured and killed.

Travis Marshall captures Holly by hitting her with his car (which breaks her arm). He takes her to Santa Maria de Loreto (a church) and blindfolds her.

Holly is kept captive in the church for several days, confused and in pain. She is berated for being a sinner, called a "whore," and forced to drink blood (from Travis). While she suffers from an untreated broken arm, she is not even allowed to have painkillers.

Finally, Holly is considered "ready." Travis heats a branding iron within a fire, and holds it near her as she begs to be set free. Travis is conflicted, especially when she claims to have a young son. He changes his mind about branding and killing her. Holly, still blindfolded, is taken in his car, and released away from the church.

Angel Batista and Debra Morgan interview Holly while she is a patient in St. Joseph’s Hospital. She gives them disturbing details about her ordeal, but mistakenly thinks two men were involved.

Holly: "One of them kept calling the other "Professor." But I didn't see either of them. I was blindfolded.”
Angel: “There were two of them?”
Holly: “The younger guy is the one who let me go. I sort of could tell that he was the weaker of the two. The younger guy said he kept calling me...”
Debra: “Holly, you're safe. What did he call you?”
Holly: “The whore. They didn't touch me except when they chained me. And the Professor, I think, would jam his knee behind my neck, and hold my head so that I couldn't close my mouth. And then he would pour this stuff into it. And the younger guy kept saying that he was sorry -- so sorry for doing this to me.”
Debra: “What'd they make you drink?”
Holly: “It was cold, and it made me puke. And it tasted like metal. I think it was blood.”

Later, Travis regrets letting Holly go and decides to remedy his mistake. He tracks Holly to the Ricochet Rabbit (yacht) that is owned by her boyfriend, Peter Grant. With the assistance of his disciples, Steve and Beth Dorsey, Travis re-captures Holly, ties her to a chair, and slashes her throat. Steve finishes the job by stabbing her through the chest. Her body is then fastened to the boat's anchor and lowered into the water.

Travis collects his blood for Holly to drink

Holly in hospital after being released by Travis

Holly hides out on the yacht

Holly pours a drink on the yacht