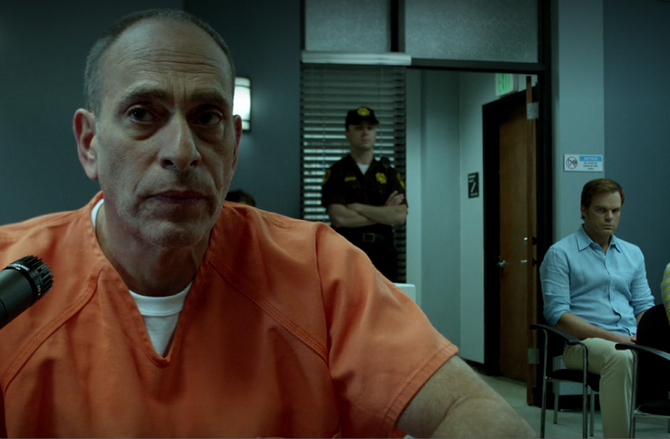 4 (shot caller, present at scene)
Possibly more (mentioned that he killed those who disobeyed him)

Orders others to do his dirty work

Estrada didn't want a leak in his organization and he ordered the death of anyone who could put him in danger.
Hector Estrada is a character in the Showtime series DEXTER.

He was the kingpin of a drug cartel with connections throughout Miami and in Columbia.

Although mentioned several times in the series, Estrada doesn't make a physical appearance until the last two episodes of Season Seven.

Estrada was a powerful drug lord who was being investigated by Detective Harry Morgan in order to bring down his drug ring. This drug organization became the prime target of Detective Harry Morgan prior to the series. His informant, Laura Moser, successfully infiltrated Estrada’s organization...until Laura was followed by Santos Jimenez to a park where she met up with Harry, thus blowing her cover. Estrada, furious that he was being taken for a fool, ordered Jimenez and Welsh to take care of Laura, as well as other enemies of Estrada (deserters, snitches, etc.).

Estrada, Jimenez, and Aliso captured everyone, including Laura’s children (Dexter and Brian), and forced them inside a cargo container located at the Shipping Yard to be executed. Laura and the other people were killed violently by a chainsaw wielded by Jimenez. Afterward, the three killers fled the scene, leaving behind young Dexter and Brian, still alive.

It took two days before the smell of the shipping container alerted nearby workers and the police stormed the scene, with Detective Harry Morgan being the first one to view the carnage. Harry was shocked to discover Dexter and Brian sitting in blood. He chose to save Dexter first because of his younger age. Brian was viewed as a lost cause and he was admitted into a psychiatric hospital, not to be released until the age of 21. He then took on the alias of Rudy Cooper. Dexter was adopted by Harry and Doris Morgan, growing up with an adoptive sister, Debra Morgan.

Santos Jimenez was admitted to the Witness Protection Program after he turned state’s witness. Aliso was killed in a drug deal, and Estrada was sentenced to life in prison. In Season Two, Dexter tracks down Jimenez who tells him that Estrada would have killed him if he had not followed his orders.

From a young age, Dexter had dark urges to kill and they shaped his entire life. Harry's sense of justice and desire to protect Dexter from arrest led him to train Dexter how to channel his urges into killing people who deserved it.

Until now, Estrada was always out of Dexter’s reach due to being incarcerated. Because he was a victim, Dexter is notified when Estrada comes up for a compassionate release (promoted by Maria LaGuerta).

Dexter attends the hearing and, despite having the option to speak up, Dexter remains silent since he wants Estrada to be let out. Estrada convinces the parole board that he is fit for society and they approve his release. Dexter finally receives the opportunity to kill the last man responsible for his mother's murder, after nearly forty years.

Estrada proves he isn’t in as poor health as displayed during the hearing as Dexter watches him chase after a bus. Dexter soon introduces himself to Estrada under the alias, Steve Gaskill. He pretends to want Estrada’s help him in selling a large amount of sativa. In order to gain Estrada's trust, he mentions some of Estrada's old partners. After initially blowing him off, Estrada is convinced by Dexter to meet up with him later that night -- Christmas Eve.

As scheduled, both men arrive at the meeting spot and Dexter walks with Estrada to a shipping container. As they enter, Estrada notices the plastic-covered interior and a chainsaw on a table. Estrada pulls a gun and Dexter quickly disarms him, although a shot is fired. Estrada is choked by Dexter until he passes out.

Upon awakening, Estrada is confronted about the Shipping Yard Massacre. Dexter informs Estrada that he cut up Santos Jimenez into six pieces and is going to do the same with him. Estrada suddenly realizes just who Dexter is but calls him "Dickie Moser." Dexter corrects his name and continues with his ritual, making Estrada look at a photo of Dexter as a three-year-old child.

Ready to kill him, Dexter picks up the chainsaw but Estrada stops him with some compelling information. He mentions that a cop had arranged for his release -- a Captain. He accuses Dexter of working with her in a setup. Dexter realizes that it was Maria LaGuerta and she is setting a trap for Dexter himself.

He cuts Estrada loose and they walk him out onto the dock, with Dexter trying to keep him quiet. LaGuerta (with two armed detectives) arrive on scene, and Estrada takes the opportunity to thump Dexter and escape into the waters below. Dexter is left without knowledge of his whereabouts.

After the failed attempt to kill Estrada, Dexter visits his wife, Florencia, in an effort to find him. He pretends to be a parole officer under the alias, Arthur Curry. She denies seeing him but Dexter follows Florencia to a local park and finds her with Estrada. She gives Estrada a bag holding a sandwich, cigarettes, and handgun. After Florencia leaves the park, Dexter pays two young boys playing nearby to throw a ball at Estrada, who then chases them into the parking lot where Dexter's vehicle waits. Dexter injects Estrada with M99, throws him into the cargo space, takes him back to the shipping container, and secures him to the kill table.

Dexter lies to Estrada, saying that he will set him free if he calls LaGuerta and lures her to the container. (This is a ruse so that Dexter can kill both Estrada and LaGuerta). While they wait, Estrada tells Dexter that his mother was a snitch and "it was her or me." Dexter stabs Estrada in the chest, killing the last of his mother’s murderers.

He plans on shooting LaGuerta when she arrives and Estrada (postmortem) to make it look like they killed each other. Unexpectedly, Debra Morgan appears on scene and tries to stop Dexter from killing LaGuerta. However, Debra herself ends up killing LaGuerta, which leaves her dealing with emotional trauma.

Dexter introduces himself to Estrada under an alias

Dexter forces Estrada to look at a photo

Estrada with his wife

Dexter caught during his kills by Debra Morgan 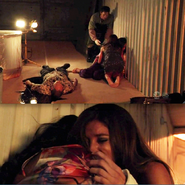 Debra breaks down in tears
Community content is available under CC-BY-SA unless otherwise noted.
Advertisement