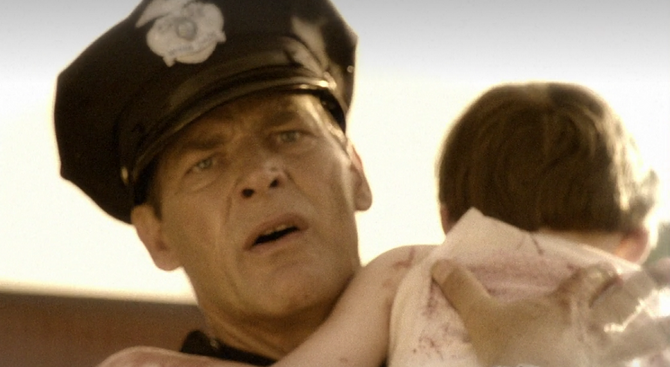 Credited for 96 Episodes
Appeared in 68 Episodes

Thought to have succumbed to arteriosclerosis;
later revealed to be suicide

2 (directly; including himself);
2 (indirectly)

He shot a criminal;
Influenced his son to kill Nurse Mary and Juan Ryness

Harry Morgan is a main character in the Showtime series DEXTER.

Harry was Dexter Morgan’s adoptive father who taught him the Code of Harry, which enabled him to live freely as a serial killer. Over ten years prior to the first season, Harry died from suicide, covered up as heart failure. After walking in on Dexter dismembering a man, he took his own life.

Although deceased, Harry appears throughout the series in two fashions, either in flashbacks or as Dexter’s inner monologue externalized for the audience. He is Dexter’s voice of reason, or “light passenger.”  Harry is not a ghost, hallucination, or “dark passenger.”

Harry was a homicide detective in the Miami Metro Police Department. As seen during flashbacks, he wore a standard uniform if on duty. He was one of the most respected officers in service, often considered a hero, and praised by Thomas Matthews, his good friend. Matthews saw a lot of Harry's influence in his daughter, Debra, who he later promoted to Lieutenant (a rank that Harry never reached).

He was the adoptive father of Dexter Morgan, as well as the biological father of Debra Morgan, born to his wife Doris Morgan. In reality, Harry knew of Dexter's existence before he rescued him in the Shipping Yard Massacre. This was because Dexter's mother, Laura Moser, acted as his confidential informant in a drug cartel led by a man named Hector Estrada. The two became romantically involved despite Harry's marriage to Doris and he knew of both her sons -- Dexter and Brian. After Laura was murdered, he adopted only Dexter. He could see in Brian Moser's eyes that he was one "fucked up kid," according to Brian.

Harry first found Dexter at the crime scene when he was just age three, and took him in as his own son. From an early age, Dexter showed signs of psychopathic tendencies, i.e. torturing and killing small animals, which Harry identified right away.

Unable to suppress Dexter's urges, Harry taught him to focus his appetite for killing on criminals that had escaped the justice system. To avoid being caught, Dexter constantly referred to the Code of Harry, a set of ruled that were instituted by Harry. Every rule that stemmed from the code was to protect Dexter and help him lead a successful cover life.

During Season One, Flashbacks focused around Dexter's youth and Harry's interactions with him. Harry was seen much as a wise man and an idealist, someone who made a bold decision that could have devastating repercussions in creating his own serial killer of a son. Dexter traced his life very closely to Harry, valued his training from him, and thought that Harry could do no wrong.

More of Harry's history came to light, especially of his affair with Dexter's biological mother, Laura Moser. She was a confidential informant for the case Harry was working on and his actions indirectly led to her murder. This led to a tumultuous emotional phase for Dexter, who couldn't decide whether Harry created a code for him out of love or guilt.

Additionally, Dexter found out that Harry committed suicide after he witnessed his son in the act of dismembering Juan Ryness. Three days later, he overdosed on his heart medication, causing his death. At this point, Dexter began to reject thoughts of Harry, the one who raised him to live by the Code of Harry. Dexter questioned the value of drawing events from the past to guide him. He began to consider turning himself in, but acknowledged that he would rather stay free and enjoy life. He also remembered Harry's warning that he could end up in the electric chair, with Harry taking a teenage Dexter inside a prison to show him the execution of an inmate. This was one of his last memories of Harry, next to the event with Juan Ryness.

Before the end of this season, the moral implications of taking the law into one's own hands became readily apparent to Dexter.

In Season Three, Harry appeared in "daydream-like" sequences.. They were usually covered in a veil of blur and bright colors, completely set within Dexter's mind. Sometimes they included other characters, such as Laura Moser, Rita Bennett, and Rita's children.

Harry frequently warned Dexter that his new friendship with Miguel Prado was a bad idea, especially when Dexter started to teach Miguel the Code of Harry. Eventually, Harry was proven right when Miguel killed an innocent person. Dexter "debated" with Harry at times when he was internally conflicted, with Harry acting as a counterbalance to Dexter's impulsive nature. Dexter also thought of him at better times, such as his wedding, when Harry was pictured next to Laura.

This tradition of portraying Harry in dreamlike sequences continue into Season Four, possibly reflecting on the theme of the season being the "American Dream" of a house, a family, a wife. Once Dexter lost it all at the end of that season, his thoughts portrayed Harry in a more realistic manner.

Harry began to show up more frequently as Dexter became confused with his new role as husband and father. Harry tried to steer Dexter toward the path that would offer him the most personal security, although Dexter began to ignore him. Harry said from the beginning that The Trinity Killer was a dangerous man that needed to be taken out, yet Dexter wanted to learn from him. Much to his dismay, Harry was once again right.

Season Five and onward, Harry appeared as if he was still alive. He's shown to viewers as standing behind Dexter or to the side, even sitting in a vehicle, where he offered insight. Harry, though, was a type of construct within Dexter's mind.

After failing to heed his inner warning (represented by Harry) about Arthur in the previous season, Dexter was faced with the reality that Rita Morgan was murdered by Trinity. At this point, Dexter imagined Harry in his cop attire. Deciding to leave his family, and life behind, Dexter set fire to his storage unit and took off in his boat. This led to Dexter violently killing a man named Rankin when he insulted Rita. Harry seemingly watched Dexter from the mirror, afterward saying that it was the most human thing Dexter had done since Rita's death. Harry reassured Dexter that he had never left, as Dexter fell to his knees. Dexter went on to release his anger and frustration. "Harry" then persuaded Dexter to return to his family, saying that running away would not solve anything.

As Dexter restarted his life as a serial killer, having located a new target, "Harry" showed up to provide advice. However, when Lumen Pierce saw Dexter kill Boyd Fowler, Harry expressed distrust of her, just as he had with Miguel Prado and Arthur Mitchell before her. Although Harry generally stopped Dexter from killing an innocent person, he suggested that Dexter should Lumen. This was a referral to the first rule in the Code of Harry: Don't Get Caught. Dexter, unsure of what to do with Lumen, eventually started to accept her as a partner.

Unexpectedly, Astor Bennett arrived in Dexter's life again with her friend, Olivia. In trying to understand Astor's situation, Harry offered Dexter a solution to the problem. He instructed Dexter that, for the safety of both girls, he needed to get them far away from Miami, especially with the Barrel Girl Gang out there. Dexter followed this advice, after dealing with Olivia's abuser.

Harry again appeared after Dexter dealt with Barry Kurt (Olivia's mother's boyfriend that abused her). Dexter automatically assumed that he was going to get the typical, "You're endangering yourself Dexter, you're taking too much of a risk Dexter," attitude. Instead, Harry said that he was proud how Dexter had put himself out there for another person, despite the risks. He praised Dexter for acting beyond his expectations.

As of the events in "Nebraska," Harry might be considered the "Light" side of Dexter's personality or his conscience. When Brian Moser (another deceased character) appeared in Harry's place, he urged Dexter to kill just for the sake of killing. Brian (the dark side of Dexter) interacted with his surroundings, ate food (pizza and hamburgers), wore a shirt that said "Nebraska is for Lovers") and seemingly killed a man with a pitchfork. In actuality, he was killed by Dexter himself. Dexter's darkness (as Brian) pressured him to forgo the Code of Harry. However, Dexter returned to Miami and resumed following Harry's teachings.

During Season Seven, Harry advised Dexter not to get close to Hannah McKay, and tried to persuade him to not kill Maria LaGuerta.

It was revealed that Harry had sought help in dealing with young Dexter (age 10) from Dr. Evelyn Vogel, a neuropsychiatrist who specialized in profiling serial killers. She and Harry collaborated to provide Dexter with essential "moral guidelines" so that he wouldn't carelessly target innocents. Even though Vogel could expose Dexter at anytime, Dexter didn't kill her, as she had known Harry and helped to create the code that he operated under. Over time, Vogel earned Dexter's trust by supporting his urges to kill and considering him a contribution to humanity.

In the penultimate episode, Dexter realized that he didn't need Harry to guide his decisions. Dexter looked to the sky and exhaled following Harry's goodbye.

Harry appears throughout the game with no line of speech on the left part of the screen whenever a new level or location is loading, with advice from Harry's code in text on the right side.

Harry's character and back story is much the same in the novels. Unlike in the TV series, Harry did not commit suicide after catching Dexter during a kill. Instead, Harry expressed regret after Dexter killed Last Nurse. Harry also never had a romantic relationship with Dexter's biological mother.

Trophy that Dexter took from a crime scene at age 10

Harry and Dex watch the execution of Carl

Harry reprimands Dexter for teasing at a soccer game

Harry, Dexter, and Deb on a hayride

Harry angry at Deb for using his gun without permission

Harry and Dex outside Angel of Mercy Hospital