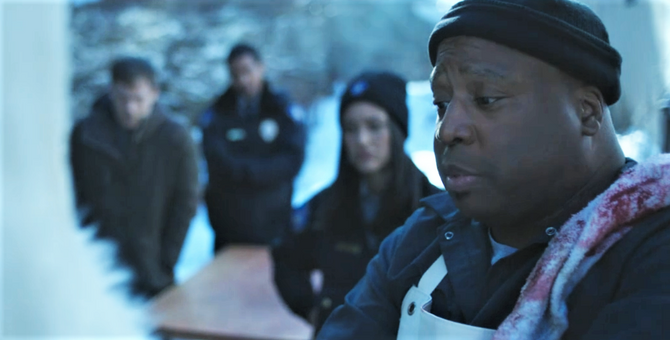 He is a friendly butcher shop owner in Iron Lake, N.Y.

Dexter walks to the back of the butcher shop where Gig is having trouble cutting into a pig. Dexter stares at the bloody scene and pulls out a cleaver. He approaches Gig from behind... only to hand him the sharp tool. Gig gratefully takes it, easily chops through the pig, and says, “You’re a lifesaver, Jimmy.”

Dexter offers his deer sled to bring the dead white deer back to town so it can be examined. As Dexter watches Gig cut open the deer and remove its entrails, he exhales sharply. Sergeant Logan assumes that the procedure disturbs Dexter and says, “A lot of folks get queasy at the sight of blood.” Dexter replies, “Yeah, it gets to me every time.”

Gig tells Angela that the shooter either didn't know what he was doing or was a poor shot, mentioning a shattered shoulder and numerous bone splinters. Gig feels around inside the deer, pulls out a slug, and hands it to Angela. She describes it as a hollow-point seven Mag with striation on the base. Dexter confirms that it’s the same type of bullet that he sold to Matt.

As Audrey is giving Harrison a ride home, she stops at the butcher shop to  pick up stuff for her mom.

Gig remarks that he’ll be glad when her mom gets the white buck out of his shop, since it’s been in the cooler for almost a week. Audrey is shocked and she runs into the cooler to see it. Gig stammers, “Whoa, whoa, whoa. Whoa, whoa, whoa. Audrey, hold up. They brought it from the crime scene. Goddamn shame.” Harrison asks Gig what he’s going to do with it and he says that once Audrey's mom no longer needs it for evidence, he’ll call Sanitation to dispose of the carcass. Audrey cannot believe that the amazing creature will be treated like roadkill. Harrison suggests they do something first and they arrange with Abraham Brown to have the white buck burned in an honorary bonfire.

Harrison and Gig in cooler