In 2011, he played Nick, a mechanic and a gang member, in Showtime's series DEXTER.

With a friend's encouragement, he began studying with acting teacher, Lorrie Hull. This led to him doing a string of art house films. At the same time, Germaine worked as a model for clothing companies such as WESC and Hot Topic. He won a "Best Actor" award at the 2004 Method Fest Film Festival in Burbank, CA which led to his singing with a manager and agent. He made his first professional acting debut doing a Honda commercial with Michael Andretti. Immediately, he began working regularly as a guest star on the major television shows "CSI Miami," "CSI:NY," "The Closer," and others. He also played Edgar Navarro on "Castle." In 2006, Germaine had his first film breakthrough with a lead role in WalkOut for HBO and another int the horror film Buried Alive. He had a supporting role in the comedy "Here Comes the Broom."

Germaine was born in San Francisco, CA. and moved to Los Angeles as a teenager. 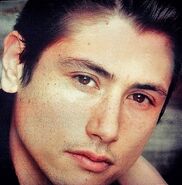