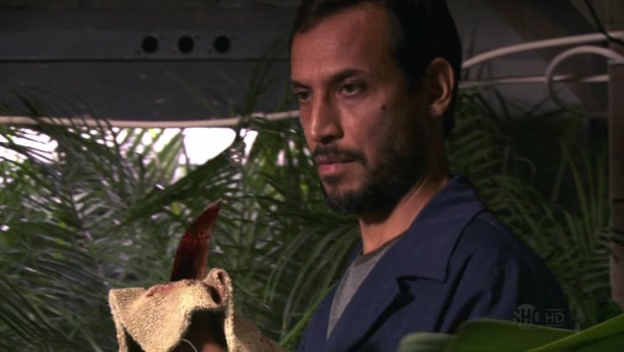 George King aka The Skinner

King began looking for Freebo because Freebo owed King money for heroin. When Freebo disappeared (he was killed by Dexter), King took it as a big showing of disrespect. King then skinned people he felt knew the whereabouts of Freebo to get them to spill the information. Although it was about respect, not money, King used it as an excuse to kill and torture, which he enjoyed.

George King aka The Skinner is a character in Season Three of the Showtime series DEXTER.

King was a Serial Killer that became the prime target for Miami Metro Homicide. He only interacted with Dexter Morgan near the end of the season. Rather, Dexter's sister, Debra Morgan, was the Protagonist in this situation and the main focus of the storyline (while Dexter paid little to no attention to the case). In contrast, the Main Antagonist for Dexter was Miguel Prado, who enlisted King's services before he was murdered, thus forcing King to go after Dexter.

King had a bit of an ego, as he took it as a major sign of disrespect when he thought that Freebo had cheated him. He made it clear that it was more about respect than money. He was willing to skin people alive to get information on Freebo's whereabouts. While he had his flimsy justifications, Dexter implied that King may simply have liked skinning people.

Jorge Orozco was born in Nicaragua. He was conscripted into his country's army, where he rose to the rank of Captain in the Resistencia Nicaraguense; heading an interrogation unit. He tortured and killed people for a living, to the point he was affectionately referred to in his homeland as "The Blade." It is implied that his army experiences caused him to be a control freak who strongly valued respect.

Orozco left the army and moved to the United States. He changed his name to George King and settled in Miami, founding and becoming boss of his own tree-trimming company. Orozco was nicknamed "The Skinner" named after his M.O. of removing the skin from his victims as a method of torture.

When one of his criminal associates, Freebo, disappears while owing him a large amount of money (he was actually killed by Dexter), King begins hunting for him throughout Miami, feeling that he has been disrespected.

Javier Garza is found dead with his skin peeled off and it's assumed that Freebo killed him. However, Dexter knows that isn't the case since he had killed Freebo before Javier was murdered.

Debra Morgan asks George King, a tree trimmer, to climb down from the top of a palm tree so that she can question him. King admits to calling in the body but says that another tree trimmer, Mario Astorga, found it.

The police soon find evidence that Freebo may have fled town.

Knowing the police are also looking for Freebo, King trails Detective Debra around town as she meets with Freebo's associates in an attempt to find him. He covertly watches their homes under the cover of trimming their trees.

While Debra is talking with Wendell Owens, King watches them, using binoculars.

The body of Wendell is found after King kidnaps, tortures, and skins him.

King is called to the station and agrees to provide a list of his employees in a polite and respectful manner.

King is again questioned, but deflects attention to Mario, his employee. Mario then comes under suspicion when King reveals that Mario killed a man with a knife back in Nicaragua.

Suspicion, though, soon centers on King when Mario has a near-panic attack when he learns that King is talking to the police.

Debra is worried about Anton Briggs when she goes to his apartment, finds him missing, and notices the nearby trees are trimmed. She previously warned him that he was in danger because the police set him up to appear as if he knew the location of Freebo.

The police determine that Anton has been kidnapped by The Skinner and alerts are sent out.

Quinn is annoyed when Debra breaks into King's shed before the warrant arrives. While there, King pulls into his driveway and they take him back to the station for more questioning. He is uncooperative, causing Debra to lose her temper. The police end up releasing King after Miguel Prado the ADA has a private talk with him.

King is stopped from finishing Anton off and forced to flee when Debra and Joey Quinn learn from Mario where Anton is being held captive.

From nearby, King watches Dexter and Miguel argue on the roof of the police station. When Dexter leaves, Miguel calls King to make sure he got a good look at Dexter. He tells King that Dexter is the only one who knows the location of Freebo.

Debra and Quinn find King hiding in a vacant house, but he escapes, injuring Quinn in the process.

The man-hunt resumes when Dexter frames King for Miguel Prado's murder. Before the police can locate King, he abducts Dexter and takes him to an abandoned tobacco warehouse. He intends to torture and skin Dexter for information, but Dexter effectively strips him of his control by revealing that he already killed Freebo and dumped his body parts in the Gulf Stream.

King is visibly thrown off by these facts, especially when Dexter correctly guesses that King simply enjoys torturing and killing people and has convinced himself otherwise. Dexter tells King that his search for Freebo is only a justification for selecting his victims. King walks away to get his torture tools but, before he returns, Dexter successfully frees himself of his bindings, but breaks his hand in the process. The two engage in a brutal fight that ends when Dexter snaps King's neck.

The police arrive on scene, having tracked down King's hideout. Dexter avoids detection by dropping King's body off the upper level of the warehouse just as a police car drives through, appearing to be suicide. King's body is dragged several feet, ironically causing his face to be skinned. After seeing his body, Debra states, "What goes around comes around."

Debra: "So how do I crack this sick fuck's brain?"
Dexter: "From what I've read about these sick fucks, they usually have some sort of... code." ("About Last Night") 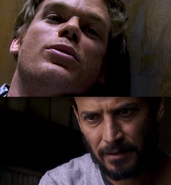 Dexter tells KIng that he finds excuses to kill 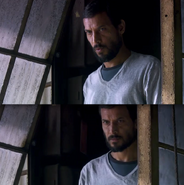 King before and after he realizes Dexter killed Freebo

Dexter breaks King's neck, despite having a broken hand