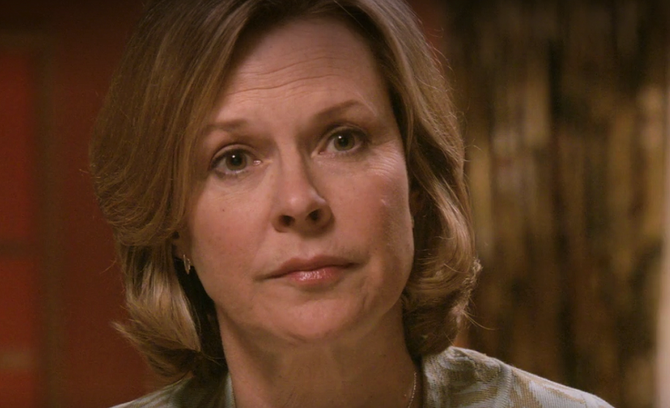 That Night, a Forest Grew

Wise One (by Dexter Morgan)

Former School Teacher
Gail Brandon is a character in Season Two of the Showtime series DEXTER.

She is Rita Morgan's mother and Cody, Astor, and Harrison's grandmother, as well as Dexter Morgan's former mother-in-law.

Gail was a schoolteacher from Ashley, Michigan, until the school board forced her to take early retirement due to her overly strict teaching style. A snide and controlling woman, she's exceedingly distrusting of anyone, especially people in whom her daughter takes an interest.

Gail has extremely high standards, making her judgmental of her daughter and her grandchildren, presumably because she used to be a schoolteacher. She also distrusts Dexter Morgan, whom she believes is a drug addict, and believes Rita is repeating her mistake with Paul by getting involved with another addict.

Gail travels from Michigan to stay at Rita's house in Miami. While Rita is at work, she watches the children. Soon Cody and Astor become unhappy when she pressures them to do extra homework every night, and rarely lets them play. If they annoy or disobey her, she sends them to bed early before Rita comes home.

When Gail finds NA pamphlets in a drawer and learns that Rita is smoking again, she tries to convince Rita that Dexter is a bad influence. Rita, however, stands up for Dexter...until she learns that he had sex with Lila West.

When Dexter and Rita break up because of Lila, Gail is pleased and becomes even more controlling. Her attitude causes Rita to force her to move out, not wanting her children to be exposed to her behavior (like she was). Gail then returns to Michigan.

Gail refuses to attend Dexter and Rita's wedding, claiming that she has started teaching again and is too busy. She does, however, send a sarcastic card expressing her hope that Rita's "third time" will be "the charm," as her previous two marriages didn't work out.

Rita hides that she was previously married twice from Dexter, and tells him that her mother is referring to her third child. Dexter discovers that Rita lied to him, and it bothers him, despite the fact that he continually lies to her.