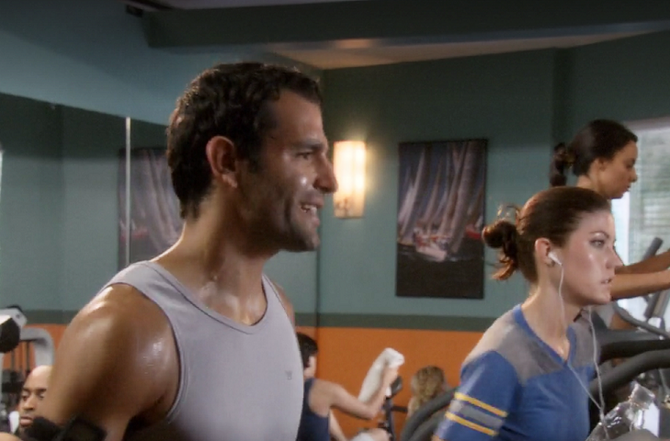 That Night, a Forest Grew

Gabriel Bosque[1] is a character in Season Two of the Showtime series DEXTER.

He and Debra Morgan begin dating after they meet at a workout gym.

Noticing that Debra is having trouble with the punching bags, he offers to help her train. This does not go well, however. While he is wrapping her hands in tape, Debra has a flashback to her abduction by her then fiance, Rudy Cooper aka The Ice Truck Killer. She quickly runs from the scene with little explanation.

She returns to the gym and apologizes to Gabriel for her actions. She offers to take him out and he accepts. They wind up going back to Debra's, which is actually Dexter's place since Dexter offered her a place to stay until she gets back on her feet. Soon after entering, they quickly become intimate. Before they begin, Debra handcuffs Gabriel to the bed and says it's because, "My last boyfriend tried to kill me."

Dexter arrives home early and mistakes the sounds from his bedroom as Debra working out. Dexter enters to tell her to quit and is surprised to find her on top of Gabriel. Needless to say, the next morning is awkward.

At the beginning of their relationship, Debra is very wary of Gabriel, even to the point of searching his personal belongings. He catches Debra doing this which embarrasses her. She explains her past experiences with Rudy, but finds that Gabriel is clueless about the Ice Truck Killer. He says that he was out of the country visiting relatives in El Salvador for the past six months and did not hear about the brutal serial killer.

Debra still knows little about Gabriel and is unaware that he writes children's books for a living. One of his books, entitled The Ice Princess, causes Debra to end their budding relationship. She notices the book referenced in his email and believes that it is a crime novel detailing her relationship with the Ice Truck Killer.

After learning that The Ice Princess is actually an unrelated children's book, Debra quickly apologizes to Gabriel, and they make up.

Gabriel begins to suspect that Debra is falling for FBI Special Agent Frank Lundy due to the way she talks about him. She even rebukes Gabriel when he calls him "Grundy."

Debra and Gabriel are in the gym, running on treadmills. He is talking nonstop to her but she has earphones on, listening to music recommended by Lundy. When Gabriel realizes that she is ignoring him, he pulls out one of the earplugs, startling her. He notices her annoyance and goes to take a shower.

While in bed, Gabriel makes advances Debra but she tells him that she is not in the mood. She then tells Gabriel that she wants to break up, which catches him off guard. He shows his hurt and asks what he did wrong, Debra explains that he didn't do anything wrong, reassuring him that he is smoking hot, fun, soulful, and age appropriate. She explains that "truth" is speaking to her from a "peaceful place," and it's telling her that he isn't the right one for her. Debra apologizes and Gabriel lets it sink in.

Gabriel meets Debra at the gym

Gabriel exercising at the gym

Deb and Gabriel
Add a photo to this gallery

Retrieved from "https://dexter.fandom.com/wiki/Gabriel_Bosque?oldid=123019"
Community content is available under CC-BY-SA unless otherwise noted.