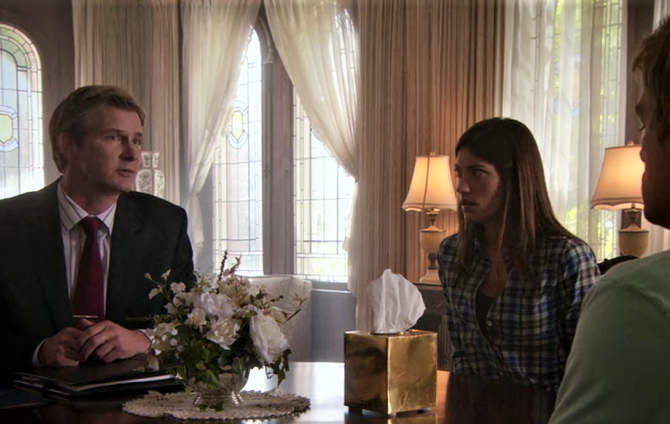 Funeral Director is a Character in Season Five of the Showtime series DEXTER.

He often plans the ceremonies for cops or their loved ones, and meets with Dexter Morgan after his wife's death.

Debra Morgan recommends the funeral director to Dexter and they go together to his parlor. The directer greets them with," I'm sorry for your loss. My sincere condolences." Dexter notes his ability to act sympathetic, while sounding as if he actually means it, and Dexter wonders how he does it.

Offering them coffee or water, the director seats them. He pushes a box of tissues toward Dexter, and Dexter politely takes one. The director brings up the decisions to be made concerning how Rita will be remembered. He speaks on the importance of the obituary, since it lets people know of the services and where to send remembrances. He tells Dexter, most importantly, he needs to express his feelings about Rita in his own words.

Suddenly, Dexter looks at the director, excuses himself, stands up, and leaves the room. Debra and the director are perplexed by his sudden exit. Debra takes over, saying that she will get information for the newspaper, and asks what else is needed.

When finished, Debra finds Dexter in another room in the funeral parlor, observing the emotions of a grief-stricken family.

Rita in her casket
Add a photo to this gallery
Retrieved from "https://dexter.fandom.com/wiki/Funeral_Director?oldid=104262"
Community content is available under CC-BY-SA unless otherwise noted.