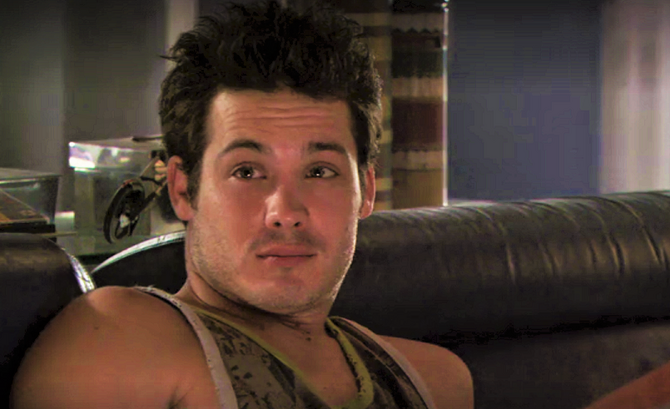 Fred Bowman a.k.a Freebo is a character in Season Three of Showtime's series DEXTER,

He is a drug dealer who killed two college girls, but got off due to a bad warrant.

Freebo is a young Caucasian man with mid-length, spiked brown hair and some facial hair. He's moderately fit with a bit of muscle. His attire is very casual. When first seen, he's wearing a sleeveless T-shirt and long, baggy red shorts.

Freebo is a man who will sell anything to make a quick buck and certainly has made a living off of it when it comes to drugs, often getting high himself. Freebo is a popular dealer and employs a few people to watch over him, as if he were a miniature drug lord (though much smaller than Carlos Guerrero). He doesn't always keep up on his due, however, as is the situation with George King, who keeps looking for him after his sudden disappearance.

He doesn't respect others, especially women, shown by the way he treats Teegan Campbell. When confronted by Dexter Morgan about his victims, he shows no remorse.

Dexter Morgan walks up to Freebo's house and is met with Freebo's young doorman. After Dexter pretends to be a junkie, the doorman rings the doorbell and says, "Ding, ding." The door opens and Dexter enters a dim interior. A man is sitting on the couch playing a bowling game on his large screen TV. Dexter claims that he wants to purchase heroin, but is his true purpose is to get the layout of Freebo's home. At first, Freebo tries to sell Dexter his TV, but Dexter says that he is only interested in "tar." As Freebo gets the product, Teegan Campbell enters the room and wants a hit. Freebo tells her to fuck off and she storms out of the house.

That night, Dexter returns to Freebo's house to kill him, but finds that he is engaged in a physical fight with an unknown man. Dexter's sudden appearance surprises both men long enough for Freebo to break free and escape. The unknown man turns his attention to Dexter, and thrusts a bayonet at him. They struggle for a few minutes, and Dexter ends up killing him in self-defense. Dexter removes the bayonet from the body and flees the scene. This is the first time that Dexter has killed someone without vetting the person beforehand.

The next day, Dexter is called to his own crime scene to investigate the murder. He spends the first few minutes looking for his crown that fell out of his mouth the previous night. The police assume that Freebo killed the man, who turns out to Oscar Prado, the younger brother of Assistant District Attorney Miguel Prado. At this point, they don't know why Oscar was killed. The high publicity of the case makes Freebo the center of a massive manhunt throughout the city.

When police are unable to find Freebo, they believe that he has left the area. However, after Teegan's body (declared a Jane Doe) is found, Dexter thinks that Freebo killed her and is still somewhere in the city. Dexter is the only one who recognizes the deceased woman's connection to Freebo since he had met Teegan the day before at Freebo's house.

Dexter learns Teegan's new address from two college girls. When he breaks into her house, he discovers that Freebo is hiding out there. He prepares a kill room in the detached garage and captures Freebo with a choke hold. He drags Freebo to the garage where he sets him up vertically, tied to a picnic table and wrapped in plastic. Dexter slices his cheek, collects a blood sample, and shows him photos of Teegan and the two girls that he had killed. Freebo is surprised to hear that Teegan is dead and denies any involvement, but Dexter doesn't believe him. Dexter then stabs Freebo in the neck with the same bayonet that Oscar Prado had used to attack Freebo.

Unknown to Dexter, Miguel Prado had also deduced Freebo's hideout location and is sitting in his car outside, gathering the nerve to kill Freebo himself. Dexter is caught red-handed by Prado as he emerges from the garage. He pretends that he was forced to kill Freebo in self-defense. Much to his surprise, Miguel thanks him for killing Freebo. Dexter persuades Miguel to keep it a secret between them and, when Miguel leaves, Dexter drops Freebo into the Gulf Stream.

Freebo's unexplained disappearance leads to Ramon Prado, another brother of Oscar, becoming involved in the plot. Miguel Prado is led to believe by Dexter that he left Freebo in an open grave in a cemetery, (Later, Miguel tries this when he kills Ellen Wolf). George King begins to kill people associated with Freebo in an attempt to track him down as he owes him money (although it masks King's real desire, which is to murder people).

Dexter later told George King that he had killed Freebo when George kidnapped and tied him up, much to King's surprise.

Freebo plays a minor role in person; however, his character turns the wheels of the plot throughout Season Three, regarding George King and Miguel Prado.

The night Teegan got killed, he claimed to be with a woman named either Cherry or Carrie from Alpha Phi Sorority.

Freebo on his kill table

Dexter kills Freebo, which sets off a chain reaction
Add a photo to this gallery
Retrieved from "https://dexter.fandom.com/wiki/Fred_Bowman?oldid=104889"
Community content is available under CC-BY-SA unless otherwise noted.