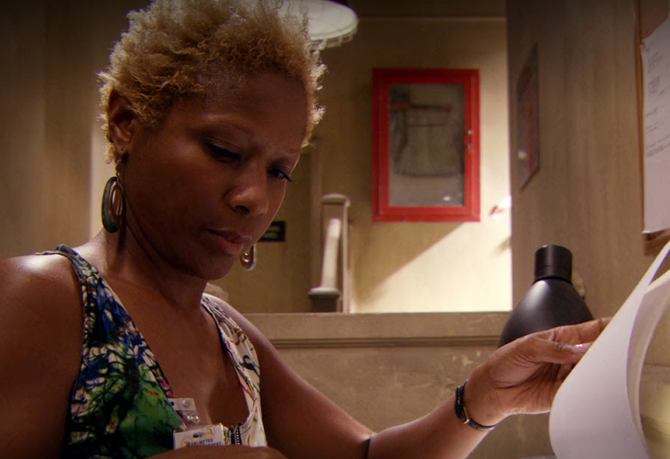 Miami Metro Police Department
Francis is a character in the Showtime series DEXTER.

She is a file clerk for the Miami Metro Police Department. Being somewhat Camilla Figg's replacement, both Debra Morgan and Dexter Morgan are friendly with her and sometimes ask her to find information in the records room.

Francis is a generally kind person, wanting to help both of the Morgan siblings (even to the point of bending rules just like Camilla Figg before her). Since she only interacts with Dexter and Debra, it's unknown how she reacts around other characters. She has a fascination with Harrison Morgan and thinks he's absolutely adorable. Debra and her often engage in girl talk, and she is somewhat flirtatious with Dexter himself.

Dexter meets with Francis in the records room, expecting to receive the three files on his mother’s killers, but she only hands him the file on Santos Jimenez. When he asks about the other two men, Francis tells him that one is in prison and the other is deceased, with Jimenez being the only open case. She elaborates on how Jimenez turned state’s evidence and went into witness protection. Now 34 years later, Francis is able to give Dexter his business address. She also gives Dexter an audiotape of a criminal informant working the case from the inside. Dexter listens to the recording and realizes it’s his mother, Laura Moser, talking with Harry. The tape is dated Friday, Sept. 28, 1973.

Debra asks Francis to begin pulling information on her father's attractive female confidential informants. They talk briefly about Debra’s suspicions, with Francis admitting that her own father had cheated on her mother.

Having not yet received the files on her father’s CIs, Debra returns to the file room. Francis gives her nothing, saying that Harry knew a lot of people, but she has not finished combing through everything. She asks if Debra is sure that she wants to know, adding that some things are better left in a box. However, Debra is insistent, explaining that she needs to put a face on the woman who slept with Harry. Francis eventually comes through and leaves Debra a stack of Harry’s female CI files.

Francis and Debra are on a break, sitting outside at a table. Deb pushes several files toward Francis, saying that she is halfway through them. Francis advises Deb to spend more time with her boyfriend, than looking for an old confidential informant. Debra says that she is meeting another woman the next day, hopefully to get some answers. When Francis asks, “Than what?,” Debra says she will know her perfect father wasn’t so perfect. Nearby, Joey Quinn chews out Dexter for screwing up in court regarding the Benito Gomez case.

Francis brings the file on Eddie Noonan, a 1979 homicide conviction, to Deb’s desk. It includes evidence gathered, witness statements, and plea agreements. Francis inquires why Debra is interested in a murder that happened thirty years ago. She takes an interest when Deb says that a similar one took place a few days ago at same address. Francis then asks for the finished CI files so she can refile them, and if Suzanna Coffey was of any help. Debra says that Coffey was only a reminder to wear sun block, but she’s still waiting for a call back on more names on the list. Debra remarks that it’s looking like she’s fucked around more than her father.

Dexter requests the file on Robert Brunner, and Francis brings it to him. He asks how deep she had to dig for the file, and she jokingly replies it was only eight boxes but she remembered to lift with her back. However, she won’t give the file to him until he lets her see photos of his son, Harrison. Dexter hands her a stack of photos and tells her that Harrison is ten months old. As Dexter looks through Brunner’s file, he sees the photos of his brutalized victim (having injuries similar to Lumen). Francis grumbles about the state of Florida letting Brunner out and says that he is living under the Tuttle Bridge because sex offenders can’t live anywhere near kids. Dexter asks to keep the file, and she says only if he’ll bring his “little cutie” in to see her, to which he agrees.

After the Club Mayan fiasco, Debra is assigned to the file room. In disgust, she announces herself to Francis with, “Detective Scapegoat, reporting for duty.” Francis seems delighted to have some company and help. She asks Debra how things are going with “that man” of hers. Debra tells Francis that, out of the blue, Quinn said he loved her -- and she ran. Francis asks why she ran, and Debra says she’s afraid she might feel the same, which amuses Francis. The first file that Francis hands to Debra happens to be the Barrel Girls Case, and Debra asks if it should be filed under “Creepy.” Francis tells her to file it under “Closed.” When Debra tries to read it, Francis reminds Debra that she getting paid to file for the next few weeks. A short time later, Francis catches Debra still reading the file and complains about her making a mess. When Francis tries to take the file away from her, Debra explains to Francis that it contains DNA results proving that multiple perps are involved in the crimes, not just one guy.

Francis advises Debra to pay more attention to her boyfriend