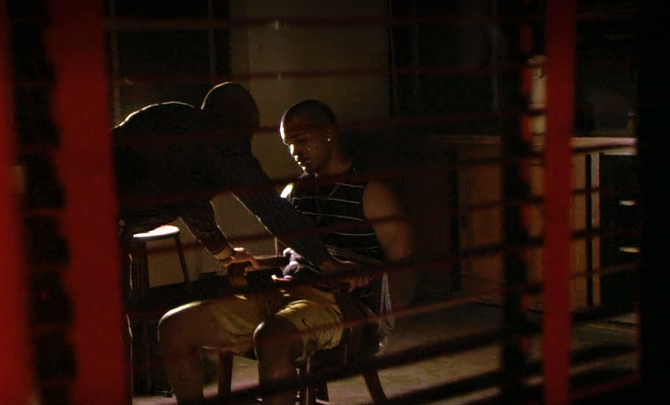 Felipe Cepeda is a character in Season Three of the Showtime series DEXTER.

He was a marijuana dealer who was tortured by Ramon Prado to learn the whereabouts of Fred Bowman aka Freebo.

During the investigation of the Skinner Case, Ramon Prado was suspected of being the Skinner and he was put under surveillance by Detectives Debra Morgan and Joey Quinn. During this time, Ramon tried to attain information from Felipe Cepeda about Fred Bowman, but he unlawfully kidnapped him to do so.

Unaware that Debra was nearby in a car watching him, Ramon hit Felipe across the back of his knees with a club, pushed him into his trunk, and drove to a secluded location. Debra followed Ramon to the building. Soon Quinn appeared by her side, startling her. They both watched from the shadows to see if Ramon would skin Felipe.

When Ramon asked Felipe for the location of Freebo, Felipe said that he had no idea, but Ramon didn't believe him. He then tortured Felipe by shaking soda bottles, opening them near his face, and letting the bubbles explode up his nose...which caused Felipe to scream in agony. Ramon kept asking Felipe about Freebo, but Felipe gave the same answer each time. Finally, Ramon gave up and cut Felipe free. Debra and Quinn realized that Ramon wasn't The Skinner.

Debra and Quinn returned to the police station, bringing Ramon with them. They notified Maria LaGuerta of Ramon's actions, which included kidnapping, unlawful imprisonment, and torture. A shocked LaGuerta told them to arrest Ramon, who subsequently was forced to resign his job as lieutenant in the sheriff's department.

Felipe denies having knowledge of Freebo

Ramon cuts Felipe loose
Add a photo to this gallery
Retrieved from "https://dexter.fandom.com/wiki/Felipe_Cepeda?oldid=105893"
Community content is available under CC-BY-SA unless otherwise noted.