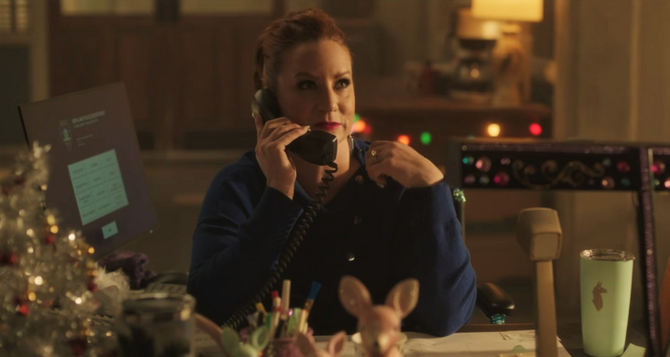 She is the dispatcher/receptionist at the Iron Lake Police Department. She likes to gossip and know what's going on in the town. Esther has two prosthetic legs.

Dexter's girlfriend, Chief of Police Angela Bishop, pulls Dexter over on his route to work and playfully frisks him. They're having sex in her car when the radio crackles with Esther's voice: "Chief Bishop, Chief Bishop, come in." Angela tries to ignore the call, but Esther continues: "Chief Bishop? Angela. Mrs. Gross's sheep got loose on the Steiner property. They're eating his winter plantings."  Angela, panting, stammers a reply: "I'm in the middle of something, uh .. can Logan take care of it?" Esther says Logan is unavailable because he's at the church where pecan pies were stolen from the potluck supper. Angela then asks if Teddy, the new guy, can handle a sheep crisis. Teddy shakes his head so Esther explains that he is out of commission due to having his wisdom teeth pulled. Angela sighs and states that she's en route to Mr. Steiner.

Later, Dexter walks over to the police station to see Angela. The moment he enters, Esther remarks, "Jim, I heard a red flag came up on Matt Caldwell. Seems like trouble follows Caldwell the Lesser wherever he goes." Dexter jokes that there are no secrets in this town. Angela is in a meeting, so Dexter waits.

When Logan returns, carrying stacks of pies, Esther inquires, "Logan, you've known Matt since forever. What do you think he could have done to flag the FBI on a gun background check?" Defending Matt, Logan says, "Matt Caldwell's a good guy. Kicking some major ass on Wall Street. I mean, he likes to hang, drink, gamble. Fight or two in high school. But, no, yeah, he's a good guy." Esther mentions the "boat crash out in Ohio' where five people died. Logan insists, "No. No way. Matt wasn't even driving. Matt was in the hospital for weeks. Shattered femur, major surgery. That whole thing was just a really tragic accident. In fact, I bet his record is spotless." However, when he checks Matt's files, Logan admits, "Okay, maybe a few spots."  Dexter tries to change the subject by asking about a needed stop sign.

Esther is at work, talking on the phone. She chuckles and says, "I'm not surprised the salon was shut down for health violations. I mean, Sally has really been letting things slide ever since Edgar fell off the wagon and started..." [Dexter enters the station.] "Rose-Ellen, I will call you later."

Dexter asks if Angela is around. Esther says she's in the conference room because, apparently, Reservation Land Management has footage of Matt Caldwell shooting the deer. "Footage?" Dexter asks, instantly concerned. Esther remarks, "Who knew there were cameras out there?" I sure didn't, Dexter thought, replying, "Huh." Esther asks, "What do they even need them for? I mean, we know how deer mate." She laughs.

Kurt Caldwell has reported that his son is alive and enters the police station to talk with Angela. Esther jokingly tells him that Matt always did "keep us on our toes."  Kurt replies, "Yeah, he really outdid himself this time, huh?"

Dexter goes to the police station to look at photos of Harrison and Ethan's stab wounds. Esther asks how Harrison is doing and "Jim" tells her that he’s okay, all things considered. Esther says she heard that the stab wound wasn't too deep, and Dexter replies that she knows about as much as he does.

Miles O'Flynn, a drug dealer, is brought to the police station and interrogated by Sergeant Logan. Miles won't say from whom he gets the drugs until Logan threatens to charge him with homicide for eighteen drug overdose deaths. Miles then reveals that a guy named Jasper Hodge makes the pills himself. Dexter, who is at the station to fill out paperwork for beating up Miles, overhears the interrogation. Logan writes down Jasper's and address and gives it to Esther. She asks how long it will take to get a warrant and Logan tells her at least twelve hours because it's Saturday and the D.A. is closed.

On his way out, Esther tells "Jim" that she's sorry about Harrison, adding, "I know you and Ange aren't Facebook official or anything, but to me, you're family." Dexter thanks her and leans in for a hug, enabling him to read the note with Jasper's name and address.

Esther at celebration
Community content is available under CC-BY-SA unless otherwise noted.
Advertisement