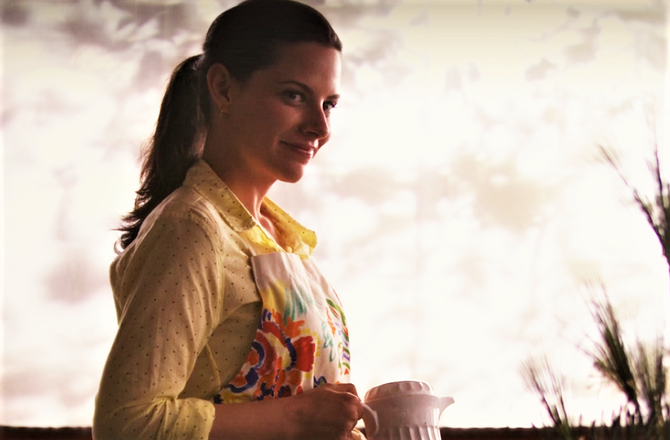 Travis Marshall had secretly installed a wire; an unnamed officer on scene tripped it, causing Erin's jugular to be punctured.

Erin Baer is a character in Season Six of the Showtime series DEXTER.

She was a waitress who had a very brief relationship with Travis Marshall.

Erin works as a waitress in the Glass House Cafe at the Miami Cultural Center (mentioned in "The Angel of Death") where Travis often eats.

Travis is interested in Erin and imagines a dialog with his previous mentor, Professor James Gellar, but Gellar does not approve of Travis becoming involved with Erin. He tells Travis that, although it is his choice to do as he wished, he will pay the consequences for his actions.

Gellar keeps a close eye on the two, even apparently watching them as they make love one night. The next morning, Travis finds Erin tied up in the kitchen. Travis tries to set her free, but Gellar won't let him, saying that by "defiling" her, Travis made Erin part of God's plan.

Later, at the Botanical Gardens, Miami Metro finds a crime scene where an Alpha and Omega symbol has been created on the ground. Blood on nearby shrubbery leads them to a green house, where Erin (still alive) has been strung up, with her mouth gagged.

Erin tries her best to warn them not to approach her. Debra Morgan notices her panic and stands still. Debra spots the trip wire and calls out, ordering the officers not to move, but it's too late. One of them trips the wire. The trap mechanism immediately releases Erin's support harness.

In an event that takes place in merely seconds, Erin's body drops down while the collar around her neck punctures her jugular vein. Her arms, attached to angel wings, are strung up to her sides. Unfortunately for her, she becomes the sacrifice in The Angel of Death tableau.

Travis watches Erin while she works

Erin spends the night with Travis

Erin is captured by Travis

Erin as The Angel of Death