Clyde Phillips
Remember The Monsters? is the twelfth episode of Season Eight of DEXTER, and the series finale and ninety-sixth overall episode of the series. It first aired 22 September 2013 on Showtime.

The estimated number of viewers for the episode during its original airing was 2.40 million.

Hurricane Laura  is threatening the city of Miami.

Dexter, Hannah, and Harrison make it to the airport while being pursued by Elway. Dexter is able to buy a backpack at a gift shop there and places it near the seats, whereby Dexter informs Gate Attendant Casey that a suspicious man planted it there and that something dangerous may be inside of it. Elway is detained by airport security thereafter.

Meanwhile, Miami Metro quickly locates an injured Debra, whom they rush to Miami Central Hospital. Dexter is informed of this news by Chief Thomas Matthews and goes to the hospital where his sister is bedridden. Dexter sits down with her in her room and tells her that this was his own fault, not Saxon's, but Debra quickly corrects this and blames Max Clayton for her wound because he got in the way. In the midst of their conversation, Dexter partakes in some memories with Debra, such as Harrison's birth, when she and him held Harrison and also remembering that Debra depended on Dexter for keeping her safe from the "monsters" during their childhood. Despite what Dexter says about it being all his fault, Debra only sees what's best for him and demands that he leave and go to be with Hannah. Dexter reluctantly does so, but he then encounters Elway outside of her room. He first inquires about Debra's injury, and then wonders if Dexter is infatuated with Hannah. This causes Dexter to pin him against a wall and tell him to stay away from him. Elway threatens that a "storm" will be coming for him, and that there will be little chance to escape. Once Dexter releases him, Elway instructs him to not side with Hannah.

Oliver Saxon hijacks a man's car after knocking him out, and then roams around town to look for someone to stitch up his lacerated arm, a wound that he received during his short gunfight with Debra. He finds a local veterinarian, whom he holds at gunpoint and coerces to tend to his wound. The vet, in the face of a gun, reluctantly does this, and then tells Saxon that he will help with anything. Saxon witnesses a news report about Debra, and contemplates finishing her off permanently, so demands that the vet drive him to the hospital where Debra is being held. Once they arrive, Saxon cuts out the man's tongue, afterward letting him loose in the hospital to serve as a distraction while he sneaks behind the doctors' backs in order to search for Debra. However, Dexter had prepared for Saxon's arrival and attempts to kill him with a fork, but is intercepted by Angel Batista, who holds a gun up to Saxon's neck and has him arrested on the spot.

While Saxon is incarcerated, Dexter asks to perform a GSR test on him. Upon entering the cell, Dexter once again interprets his feelings about Deb's wound, claiming it to be his own fault, although he still blames Saxon for his many other felonies. He explains that Saxon, in one "sharp" movement, was able to take away Dexter's stupid dream of having a happy life. Saxon questions if why he's here is to tell him all of this, but Dexter explains that he wishes to end Saxon's life with a pen, which he soon places on the table. However, Saxon preempts this and stabs Dexter right in the shoulder, but the latter yanks the pen out and stabs Saxon's left carotid artery, causing him to fall down and bleed to death. Later, Dexter easily convinces Angel and Quinn that the homicide was a self-defense, which is proven true by the police footage. However, they may suspect that Dexter planned it that way.

Afterward, Dexter turns to his bedridden sister, who is now in a vegetative state, due to the forming of a blood clot somewhere in her brain. Dexter is torn apart when he sees his sister living in this condition and so, Dexter chooses to mercifully shut off her life-support....While all of the other patients are being evacuated due to the oncoming Hurricane Laura, Dexter carries his sister's sheathed body out to the Slice of Life, upon which he drives the boat out to sea and calls Hannah for the last time. He tells both her and Harrison that he will meet them soon. After Dexter says goodbye, he throws the phone into the ocean and drops Debra's body into the water. Any investigation by Quinn or the others as to where Debra's body disappeared is left as a loose end. In order to protect his son and girlfriend from himself and only himself, Dexter drives his boat toward the hurricane. He is determined to end things his way, even if it means faking his own death. The storm clears and his boat's wreckage is found off the coast by patrols, who report the discovery to Batista. All assume Dexter died in the storm.

All the while, Hannah and Harrison have evaded Elway, who did catch up to them, but was injected with M99 by Hannah and his hunt for her ends in failure. This leaves Elway being the only living person apart from Hannah and Dexter who knows Harrison is with Hannah.

Later, in Argentina, Hannah reads a report about Dexter's fate.

Several large logging trucks, loaded with felled trees, arrive at a lumber mill. The driver is the focus as he finishes up his work and returns to his cabin. The man closes the door behind him, takes off a cold-weather vest, and sits down at a wooden table. He looks out the window at his left before he faces forward. Behind his grown-out beard and flannel jacket is the face of The Bay Harbor Butcher, who closes his eyes for a moment and then opens them, staring straight into the camera.

Dexter promises to join Hannah when he can

Debra in a coma due to a blood clot

Hannah and Harrison at a cafe in Argentina 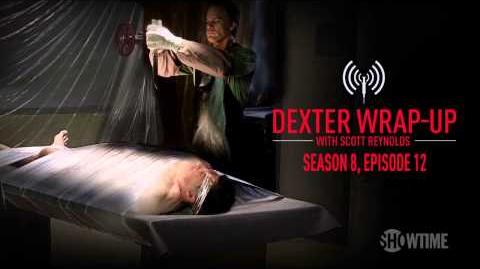 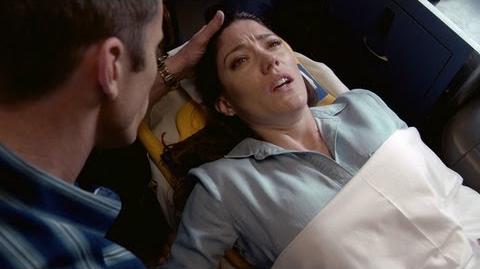 Dexter Season 8 Episode 12 Clip - What I Deserve
Add a photo to this gallery
Retrieved from "https://dexter.fandom.com/wiki/Episode_812:_Remember_the_Monsters%3F?oldid=122318"
Community content is available under CC-BY-SA unless otherwise noted.