Clyde Phillips
Monkey In a Box is the eleventh episode of Season Eight of DEXTER, and the ninety-fifth overall episode of the series. Directed by Ernest Dickerson and written by Tim Schlattmann and Wendy West, it first aired 15 September 2013 on Showtime.

The estimated number of viewers for the episode during its original airing was 2.40 million.

Dexter is torn between fleeing the country with Hannah and Harrison or taking Saxon out for good. His inaction results in a grisly and unexpected consequence.

Evelyn Vogel has been murdered by Saxon right in front of Dexter, having her throat slit. When Saxon discovers that the police suspect him of murdering Cassie Jollenston, he turns himself in to clear his name and here Dexter is told to get a DNA sample from him, whereby the police learn that he is related to Vogel and so Detective Joey Quinn has a feeling that Saxon may be responsible for his mother's murder. Saxon meets up with Dexter in his apartment, telling him that he's offering him a truce - both of them forget about each other and go their own separate paths in life. Dexter bluntly refuses, but Saxon reminds him that he has a lot more to lose than himself - a son, step children, a sister, and girlfriend (Hannah).

Dexter then agrees to the truce, but in secret, plans to kill Saxon to protect his family from harm (similarly to how he made a truce with Trinity years earlier, but was planning to kill him in secret). On the search for Saxon once again, Dexter finds The Treatment Room and there he finds Saxon's computer, containing the footage of the latter murdering his previous victims. Dexter delivers this footage to a local media outlet, via internet, presenting himself as a 'concerned citizen'. This immediately gets Saxon's attention, who gets enraged at Dexter for putting him in the spotlight. He breaks into Dexter's apartment and sneaks into his bedroom to kill him, however, Dexter injects him with M99 while Debra is holding a gun to the back of Saxon's head.

Dexter straps him to his own table in the Treatment Room, however, Saxon shows no sign of fear or anger, but just lies down in amusement awaiting his final end. However, as he speaks with Saxon, Dexter comes to realize that he no longer feels the need to kill Saxon and just wants to be with Hannah and Harrison. Saxon then tells him to walk away and forget about him and everything, but Dexter stuffs a rag in his mouth and tells him that he's still going to die, but by electric chair (not by Dexter's hand).

He then calls Debra and tells her to arrest Saxon, and the two say goodbye to one another. However, unbeknownst to Debra, Clayton was following her the whole time...suspecting her of harboring Hannah, who is now a wanted fugitive. Clayton goes inside the hospital where Saxon is being held and upon seeing him inside playing the innocent victim, he frees him. Saxon proceeds to immediately stab Clayton in the chest with one of Dexter's knives that were right beside him. He then takes Clayton's gun and as Debra enters, he immediately shoots her in the gut. As she's going down, she manages to get in a shot on Saxon's arm, as he's escaping.

Potential buyer for Slice of Life

Matthews has a talk with Deb and Dexter

Dexter embraces Debra one last time before leaving for the airport

Saxon strapped to his own kill table

Saxon looks back at Deb

Debra, severely shot by Saxon
Add a photo to this gallery 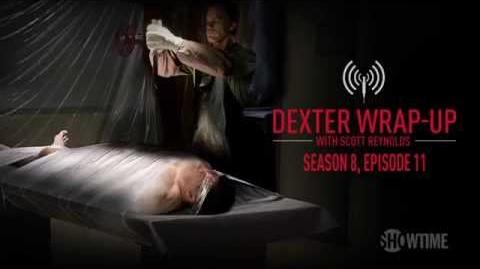 Season 8, Episode 11 Wrap-Up (Audio Podcast)
Add a photo to this gallery
Retrieved from "https://dexter.fandom.com/wiki/Episode_811:_Monkey_in_a_Box?oldid=122317"
Community content is available under CC-BY-SA unless otherwise noted.