Clyde Phillips
Goodbye Miami is the tenth episode of Season Eight of DEXTER, and the ninety-fourth overall episode of the series. Directed by Steve Shill and written by Jace Richdale and Scott Reynolds, it first aired 8 September 2013 on Showtime.

The estimated number of viewers for the episode during its original airing was 2.34 million.

Dexter tells Deb that he and Harrison will move to Argentina with Hannah. He also tells Dr, Vogel that her son, Saxon, is dangerous and she needs protection. She insists that he let her deal with him, but Dexter has no intention of leaving Miami while Saxon is alive.

Vogel and Saxon have breakfast. They argue over his future, with Vogel offering to find him care. He says he will never return to full-time care and is furious at her for helping Dexter while he was "rotting" in a hospital. She offers to help him but he doesn't think he can trust her.

Dexter tells Hannah that, while he thinks the investigation into her is dying down, she still needs to lay low. They are still planning to leave town with Harrison. He also says he feels like he needs to reach out to Vogel and make sure she's okay. Debra returns home and Dexter takes her aside to break the news of his planning to leave the country. She's not happy.

Quinn and Jamie have dinner. She's being recruited by a special needs academy in Atlanta but isn't going to accept because she doesn't want to leave town. He tells her to focus on her career and that they'll "make it work."

Vogel goes to see Matthews. He's at a dead-end looking for Zach Hamilton and wants some help. She doesn't say much.

Dexter researches Oliver Saxon. He's moved all over the world without being arrested and Dexter wonders if he might be the "perfect psychopath." Dexter spots Vogel and asks her into his office. She admits to having been in contact with her son but says she isn't sure if she'll see him again. She's feeling guilty about being a bad mother and says she has to help her son. Dexter wonders what to do and Harry shows up to tell him he needs to kill Saxon.

Debra and Quinn have lunch. She tells him Dexter is leaving and says she's worried he won't return. Quinn thinks she should think about what is best for Dexter. She also says she's probably returning to Miami Metro.

Niki shows up late to a crime scene smelling of marijuana. Masuka is furious and sends her home. Dexter gives Angel his notice and asks him to keep the news private for the moment.

Hannah tells Dexter the sooner he kills Saxon the sooner they'll be able to start their new life together. Dexter thinks he needs Vogel's computer to find him.

Saxon waits outside Vogel's place and asks her to get in his car so he can show her something.

Saxon brings Vogel to the old psychiatric hospital where he kills his victims. He's made the room look exactly like a Treatment Room from the place where he'd been held. He wants her to show him how to exist in the world while still a killer...to help him like she helped Dexter. She agrees to "find a way" and says she'll talk to Dexter.

Dexter uses Vogel's spare key to break in and use her computer to find Saxon. He's able to get into Saxon's computer and finds videos of his last two kills, including Zach. Dexter downloads them onto a flash drive.

Clayton tells Angel that the Hannah investigation has been dropped to low priority. While in his office, Clayton overhears Angel looking for Dexter's replacement. Clayton is intrigued when Angel tells him that Dexter is leaving to spend time with his family.

Quinn breaks up with Jamie. She's convinced that Debra is the reason and is upset when Quinn says Debra had nothing to do with it.

Debra returns home and watches Dexter, Hannah and Harrison together. He hands her a beer and they talk about him leaving. Debra is scared.

Vogel stops by to see Dexter. When she sounds optimistic that her son can be saved he shows her video of Zach's murder. She finally agrees that he must kill Saxon and instructs Dexter to make sure it's painless.

Clayton stops by to see Debra and Harrison on the beach. He tells her of his suspicions concerning Dexter and Hannah, but Debra does a good job of throwing him off the scent. After he leaves, Debra goes inside to tell Hannah what happened, reminding her that she needs to stay hidden.

Debra tells Elway she's leaving. It is a short conversation.

While Hannah is watching Harrison he falls off Debra's treadmill and cuts his chin badly. She calls Dexter but he doesn't answer. Hannah takes Harrison to urgent care where the receptionist seems to be watching her carefully.

Dexter sets up his kill room and is using victim pictures for the first time in awhile. He's using an old kill room and the two reflect on how far he's come.

Debra goes to the station to tell Angel she's officially coming back. Jamie yells at her when the two cross paths. Angel tells Debra that Jamie blames her from Quinn ending things.

Debra takes Quinn outside to talk things over. He says he probably would have ended things with Jamie anyway, but their kiss played a role. She tells him she still has feelings for him and then kisses him.

The receptionist tells Max Clayton that she definitely saw Hannah. He looks down at the log book and sees she signed in as Debra Morgan.

Dexter returns and Hannah tells him about the emergency visit for Harrison. He's concerned that she's been exposed. Vogel calls to say that Saxon is on his way over. This concerns Dexter and he tells Hannah that he should go there. Dexter leaves the house but is clearly torn about whether to stay with Hannah or go to Vogel.

Dexter pulls up to Vogel's home and gets out of his vehicle. As he walks to the door, his phone rings. It's Saxon. He tells Dexter to watch the window. Saxon is standing behind Vogel. He says, "Mother chose the wrong son" and cuts her throat. Dexter hurries inside where Vogel dies in his arms.

Vogel has breakfast with Daniel.

An Dead Cyclist has been killed in an apparent hit and run. 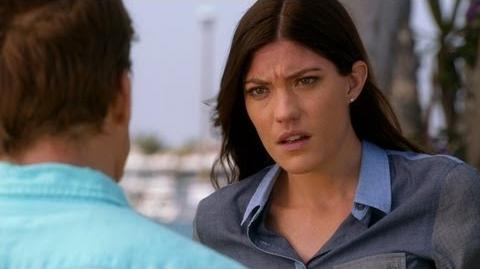