Clyde Phillips
Make Your Own Kind of Music is the ninth episode of Season Eight of DEXTER, and the ninety-third overall episode of the series. Directed by John Dahl and written by Karen Campbell, it first aired 25 August 2013 on Showtime.

The estimated number of viewers for the episode during its original airing was 2.28 million.

Dexter discovers that Dr. Vogel had two sons and one of them was murdered by the older, Daniel, who was interned in a mental institution and died in a fire. Dexter believes that Daniel might have faked his death and be Oliver Saxon. Dexter also decides to take Hannah and Harrison to live in Argentina, but a federal officer is seeking her, so she hides at Debra's. Debra is invited to return to the Miami Metro. Dexter uses Vogel to catch Saxon before traveling.

Dexter and Hannah are in bed. He advises her to stay inside, but she says she has to meet with Arlene to get the money she's been squirreling away over the years. They exchange "I love you."

Dexter meets with Vogel to figure out Zach's murder. He vows to find the person responsible and kill them. He finds a spot of blood and hairs the killer missed. Dexter wonders if Zach might have put them there on purpose to direct Dexter to the killer. Dexter tells Vogel about his plans to make a life with Hannah. He says, after he finds and kills The Brain Surgeon, he's going to work on his life with Hannah.

Elway meets with a U.S. Marshall, giving him the information he has about Hannah being Maggie. He asks to be part of the team, but his request is denied.

Angel asks Debra if she wants to come back to Miami Metro. She doesn't think Matthews would go for it. Quinn drops by and asks Debra to look into Zach. He gives her a file and says he thinks Cassie was the second person he's murdered.

Debra drops by Miami Metro to see Dexter, who is looking at the blood evidence from Zach's killing. Dexter tells Debra about Zach being dead. Dexter learns that the hairs were a familial match to Evelyn Vogel.

Dexter goes to see Vogel and tells her the Brain Surgeon is related to her somehow. She tells him she has two sons. The oldest son Daniel killed her youngest. Daniel was a psychopath and her desire to help him led her into her current field. He was placed in a mental health facility in England when he was 14 and was killed in a fire at the facility. Dexter suggests that perhaps Daniel faked his own death.

Dexter ages a picture of Daniel as a child to look like he's in his forties. It starts to look like Oliver, the man Cassie was dating. The computer proves a facial match. He finds the real Oliver Saxon's death certificate online. Angel pops in with Max Clayton, the Marshall that Jacob Elway sent to look at Hannah. Dexter calls Hannah to warn her. She needs the money, so he offers to take her to see Arlene.

Quinn and Debra have lunch. He talks about Jamie and her issues with Debra still being in his life. Debra offers to speak with Jamie.

Dexter and Hannah stop by Arlene's place. Almost as soon as she gets the money out from a closet Dexter sees Clayton pull up in front of the house. Dexter hides Hannah away and sits at Arlene's table. His story is that he's there to tell Arlene that Hannah could be in town. Clayton asks how Arlene could afford her new home, at which point Dexter pretends to be her boyfriend. It seems to work.

Debra pays Jamie a visit. Jamie talks about the guy Cassie was dating and tells her that Cassie was on the verge of ending things. They had been scheduled to take a trip to the Bahamas. Debra calls Quinn and says she thinks they should look at Oliver Saxon for Cassie's murder.

Outside Arlene's Dexter tells Hannah he thinks the best place for her to stay is Debra's.

Debra and Quinn interview Saxon at his home. They ask him about his work schedule and Debra points out it seems strange he was planning a trip with so much on his plate. Based on the conversation she had with Jamie, Debra is convinced he's lying.

Outside Saxon's place, Quinn kisses Debra. He immediately apologizes and Debra says they need to pretend it never happened.

Debra comes home to find Dexter and Hannah waiting for her. Dexter asks if she can stay for a few nights until he gets her out of town. She tells Dexter about getting Quinn to focus on Saxon. Dexter doesn't elaborate, but advises her to stay away from Saxon.

Feeling like time is of the essence, Dexter goes to Saxon's place but finds it empty. He looks in a nearby trashcan for DNA to compare with the hairs he found in Zach's studio.

Harrison asks Dexter about the TV reports he's seen with Hannah. He tells his father he wishes Hannah could be his mother. Dexter gets an email from the lab proving Saxon is Vogel's son.

Dexter tells Vogel her son is alive. He tells her he plans to murder him and she says she's conflicted. She thinks she has a second chance and doesn't want her son to be killed. Dexter plays along and asks for help finding Daniel. Dexter figures out Daniel has been monitoring her laptop and plans to install spyware to find him. Vogel sends an email

Hannah talks to Dexter about deceiving Vogel and intending to kill Daniel. She brings up Harrison, but Dexter thinks Saxon must be stopped. She suggests the two of them making a new life in Argentina. He likes the idea and plans to give notice at Miami Metro.

Deputy Chief Matthews asks Angel about Zach. His parents have just filed a missing persons report and wants to be the first to know if something comes up.

Angel brings in Debra and hands her a badge. Before accepting she tells Angel she needs time to think about everything.

Quinn tells Debra it seems Saxon's moved out. She tells him good luck and leaves.

At home, Debra and Hannah make small talk. She asks Debra if she's going to go back to the force and the relationship between the two seems to thaw somewhat.

Clayton stops by Dexter's place and tells him he thinks the Hannah threat has died down. They are going to pull off the protective detail. Clayton asks Harrison about a family picture he's drawn that features a blonde woman. Dexter is alarmed, in fear that Harrison identifies her as Hannah, but he just calls her "Mom." It makes sense, since his real mother Rita and mother figures Lumen and Hannah are all blonde.

An angry Elway confronts Debra about finding out Dexter used to date Hannah. He's pissed that she was holding out on him and says if she doesn't care about her job she might as well quit.

Dexter stops by Vogel's place and puts one of Hannah's drug in her tea. The plan as she sees it is for them to meet Daniel, drug him and bring him to a facility. She is happy to be seeing her son. Vogel falls over and he makes her comfortable before leaving.

Dexter watches Daniel at a diner, King's Bay Cafe. He eventually leaves and Dexter follows him. Daniel gets into his truck, after he slashes Dexter tire, and glares at Dexter before peeling out. Harry suggests to Dexter that perhaps Daniel went looking for Vogel.

Dexter arrives at Vogel's place and finds her safe. She tells him that from now on she wants to handle Daniel on her own. She doesn't think she can trust him any longer. Dexter says that he's going to kill Daniel, then leave the country with Hannah. She tells him to "leave us alone."

After Dexter leaves, we see that Daniel has been listening to the conversation. He wanted proof that his mother didn't send Dexter and seems satisfied. They sit down together for breakfast. 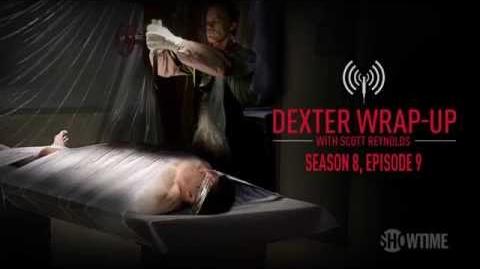 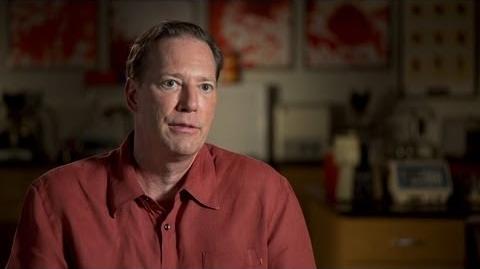 Add a photo to this gallery
Retrieved from "https://dexter.fandom.com/wiki/Episode_809:_Make_Your_Own_Kind_of_Music?oldid=124098"
Community content is available under CC-BY-SA unless otherwise noted.