Are We There Yet?

Clyde Phillips
Are We There Yet? is the eighth of twelve episodes in Season Eight of DEXTER, and the ninety-second overall episode of the series. Directed by Holly Dale and written by Wendy West, it first aired 18 August 2013 on Showtime.

The estimated number of viewers for the episode during its original airing was 1.94 million.

At Cassie's crime scene, Dexter speculates that Zach may be her killer. Cassie's boyfriend Oliver is questioned and says that he had been inspecting a building at the time of murder. Dexter finds blood under Cassie's fingernails and takes a sample. Debra shows up and tells Dexter that she's been considering rejoining the force as a detective.

At the lab, Dexter runs the blood from under Cassie's fingernails and gets a DNA match for Zach Hamilton. Masuka then walks in and introduces Niki to Dexter as his new lab assistant. As Dexter leaves, Quinn stops him and compares the bludgeoning photos of Cassie and Norma Rivera; he thinks that Zach may be responsible for the former's death. Dexter subtly tells Quinn to lay off of Hamilton and lies that Zach's DNA wasn't at Cassie's crime scene.

Dexter meets with Vogel, and neither know where Zach has escaped to. Dexter is angered that he had allowed Vogel to talk him out of killing Zach, who ended up allegedly killing again. Vogel thinks that Dexter couldn't possibly kill Zach, as a bond has formed between them but Dexter denies it.

Dexter tracks Zach's credit card to the Florida Keys and plans on traveling there with Hannah to kill him. Debra then shows up and asks Dexter whether or not Hannah is out of their lives, to which Dexter responds by saying she'll leave once she gets her passport. Debra knows that Dexter is lying to both himself and her, and jealously asks "Are you on top of it or on top of her?"

Dexter arranges for a new passport for Hannah so she can leave the country, and suggests she moves to Argentina.

Debra tells Elway that she believes Hannah is back in Miami, and informs him about the $250,000 bounty on her head. Elway immediately agrees to pursue the case. At the marina, Hannah's yacht is gone. Elway is reluctant about pursuing Debra's lead but agrees to bribe the dockmaster to get any information about the yacht.

Debra returns to her beach house where she quickly tracks Dexter's car which she has GPS bugged. She sees that he's traveling to the Keys and pursues him.

Dexter and Hannah arrive at the motel where Zach used his credit card. Dexter finds a room with plastic over the windows, and breaks in to find that Zach has set up a crude, sloppy kill room almost identical to his own. A fresh set of knives lay on the bed and the plastic wrap is sagging off the walls. Dexter decides he will kill Zach in his very own kill room.

Quinn meets with Oliver and questions him about his girlfriend's death. He shows Oliver a photo of Zach and asks if he recognizes him, to which Oliver says no, even though Oliver had seen Zach with Dexter just outside of their apartment a few days earlier.

Zach returns to the motel room, and Dexter pins him against the wall and demands to know why he killed Cassie. Zach denies knowing her and killing her, and says that he instead went after Shawn Decker. He explains that Decker killed a girl a few years earlier and bragged about it. He shows Dexter photos of Decker, noting that the time stamps prove he was tracking him. Zach tells Dexter that he decided to go after "someone who deserves it."

In the parking lot, Zach shows Dexter the bludgeoned corpse of Decker in his trunk. He explains that he had tried to knock him out, but couldn't so instead he bludgeoned him to death. Dexter points out that anyone on the second floor of the motel could have seen him moving the body, and criticizes him for not having a backup plan. Dex and Zach leave to dump the body and clean the car, and Hannah stays to clean the room. As Dexter opens the car door, Zach warns him to watch out on the handle because it had cut his own hand earlier and drew blood. Dexter contemplates if someone had done that to Zach's handle so they could plant his blood at Cassie's crime scene.

When Hannah returns to the room, Deb is waiting for her and tells Hannah to put on handcuffs. Hannah tells Deb that she'd rather die, and suggests that if Deb loved Dexter as much as she did, she wouldn't crush him by arresting her. Debra reluctantly lets Hannah go.

Dexter and Zach stop by Vogel's house. Vogel insists that Hannah joins them for dinner. At dinner, Hannah asks Vogel how she got into her field of study to which Vogel changes the subject. Dexter says that Cassie's murder is on his mind, and the group looks at photos of Cassie's crime scene. Zach is fascinated, and notes how similar the crime is to Norma's murder. After dinner, Vogel drops off Zach and Dexter brings Hannah to her hotel room. They end up having sex.

Dexter returns to his apartment and finds Zach's motionless body at his desk. Vogel's favorite song, "Make Your Own Kind of Music", is playing in the room as Dexter swivels Zach around in his chair, revealing his head to be sliced open and a piece of his brain missing. Dexter dumps his body in the ocean, and Vogel finds a piece of Zach's brain on her doorstep.

In the morning, Dexter catches up with Hannah before she can take off, and asks her to stay in Miami.

Zach asks, "Are we there yet?" 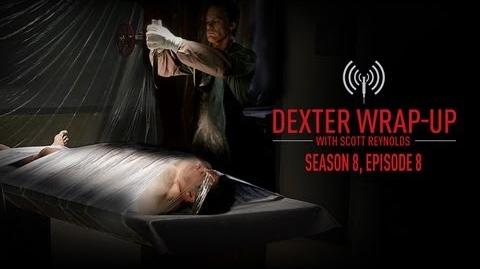 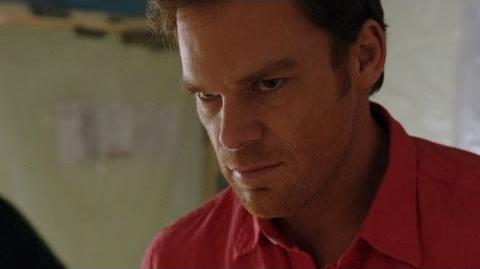 Retrieved from "https://dexter.fandom.com/wiki/Episode_808:_Are_We_There_Yet%3F?oldid=122314"
Community content is available under CC-BY-SA unless otherwise noted.