Clyde Phillips
Dress Code is the seventh episode of Season Eight of DEXTER, and the ninety-first overall episode of the series. Directed by Alik Sakharov and written by Arika Lisanne Mittman, it premiered 11 August 2013 on Showtime. The estimated number of viewers for the episode during its original airing was 1.90 million.

Dexter finds Hannah living on a luxury yacht with her husband Miles Castner. Meanwhile, Dexter has agreed to teach Zach Hamilton the code, but he is proving to be a difficult student. When someone close to Dexter is killed, he's certain that Zach is the culprit. Masuka arranges a new job for his newfound daughter.

After being drugged by Hannah McKay, Dexter wakes up in an industrial area outside of town. He calls Debra, who is by herself and okay. She comes to pick him up and he confirms that Hanna must have poisoned their food. They're not sure why she didn't kill them. Dexter's plan is to use surveillance cameras to find a license plate. Debra is freaking out and tells Dexter she wants Hannah "gone."

While Dexter puts in a request for the traffic footage Zach shows up at his door. He was supposed to meet Zach that morning. Dexter tells them they can never be seen in public. Vogel has told Zach about the code. While they talk Cassie and her new man leave for a night swim. Dexter will him and tells Zach he needs a cover life.

Elway sees Debra searching online for Hannah. He asks what she's doing and Debra gets upset at the invasion of privacy. Elway gets pissed that she's being nasty to him given everything he's done for her.

Dexter sees Hannah on camera driving a rental. He calls the rental company pretending to be a cop investigating a hit-and-run. He's given both a phone number and address. Dexter and Harry think it was way too easy to find this information.

Jamie is ready to move out of Angel's place and hints to Quinn about them living together down the road.

Nikki apologizes to Masuka for blowing up at him. She says she's working that night but will call him so they can grab dinner.

Dexter sees Hannah getting off a yacht with a man who appears to be her significant other. He follows them to dinner at a private club, where he's not allowed in because of the dress code. Dexter calls Zach and has him help get him in. Dexter approaches Hannah while her date is in the bathroom. She's going by Maggie now and is married to this man named Miles. Miles returns to the table and tells Dexter "Maggie" told him Dexter betrayed her by turning him into the police. Miles and Hannah leave the club.

Dexter looks Miles up online. He made hundreds of millions in offshore casinos. Debra stops by and Dexter fills her in about Hannah and Miles. Debra thinks Dexter is still in love with Hannah. She reminds Dexter how important it is that they get Hannah out of their lives. Harrison hears the word Hannah and asks about her.

Masuka drops by Nikki's work and isn't thrilled to see that she's working as a topless waitress.

Debra and Vogel talk about Hannah. Debra wants to have Hannah arrested, but tells Vogel that she knows too much. Vogel tells Debra to consider all consequences before taking any drastic action.

Dexter looks up to see Zach and his lawyer arrive in homicide. They're requesting the police stop their 24-hour surveillance. Matthews backs Zach's family. They leave and Angel orders Quinn to leave it alone.

In the parking lot, Dexter impresses upon Zach the importance of patience and control.

Miles confronts Dexter while he's pumping gas. He threatens to make a few calls and "ruin your life" if Dexter doesn't leave Hannah alone. Miles leaves and Dexter texts Hannah, asking her to meet. Based on the conversation he's worried Miles might be a threat to Hannah.

Dexter meets with Hannah and tells her about the meeting with Miles. She confesses that she initially drugged Dexter because she wanted him to kill Miles. Miles is obsessively controlling and jealous. He makes her feel like she's in prison, but because his family already suspected her of being a gold-digger she can't risk doing the job herself. She says that she's changed her mind after seeing him, since she realizes how much she loves him and now doesn't wasn't to manipulate him into doing something that might be bad for him.

Debra apologizes to Elway for overreacting earlier and tells him he doesn't want to find out what she's really like.

Cassie almost catches Debra putting a GPS tracker on Dexter's car. Debra plays it off and the two talk about Cassie's brief romantic connection to her brother. Ultimately Debra warns her to stay away from her brother and stick with the good thing she's got going now.

Dexter meets with Vogel and tells her about Zach being a little too enthusiastic. She reminds him that Zach is his responsibility and he needs to "take this very seriously."

Dexter calls Zach and leaves him a voicemail asks him to meet at his studio. He is then jumped by three of Miles' henchmen. After they leave he wonders to himself what Miles might do to Hannah if this is what he's capable of.

Debra tells Elway he doesn't deserve how she's treated him and thanks him for everything he's done to help her.

Zach pounds on Dexter's door. Cassie hears the noise and politely tells the kid this means he's probably not home. Zach storms off and rudely tells Cassie to give Dexter a nasty message for him.

Miles confronts Hannah with the knowledge that he knows she was with Dexter. She assures him there is nothing wrong but this doesn't seem to help. He grabs her aggressively and tells her she's never going to leave the boat. He jumps on top of her and says "you belong to me."

At this point, we see Dexter come on board Miles' yacht. He walks into the room and finds Hanna kneeling over his dead body. She says she killed him when he wouldn't let her run away. Dexter says he'll help her get rid of the body.

Dexter and Hannah use his boat to dump Miles at sea. With Debra watching they return to shore and she asks if he regrets not killing her. He tells her no, and she expresses the same sentiment. She says was never going to kill him and doesn't enjoy any of this. Hannah has bought herself a few days by telling the crew Miles wanted to go to New York. Dexter gets a call to a crime scene at his building and asks Hannah not to leave town before they speak again.

Dexter arrives to find that Cassie has been killed. She was bludgeoned, much the same way Norma was. Dexter wonders if perhaps Zach killed Cassie and is concerned he won't be the kind of teacher Harry was. 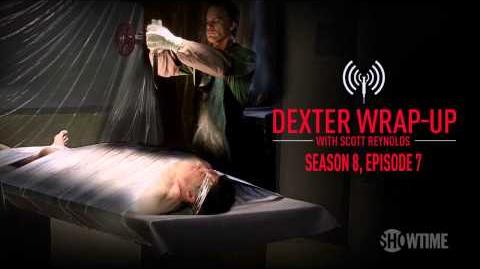