Clyde Phillips
A Little Reflection is the sixth episode of Season Eight of DEXTER, and the ninetieth overall episode of the series. Directed by John Dahl and written by Jace Richdale, it first aired 4 August 2013 on Showtime.

The estimated number of viewers for the episode during its original airing was 2.21 million.

Dexter monitors a young psychopath to see if he meets the criteria of the Code. Dexter and Debra finally get back to normal, but are surprised when someone from Dexter's past pays them a visit.

Zach Hamilton is at the scene of a car accident, taking pictures. Dexter thinks the kid is "drawn to blood" like he is. For a week, Dexter has been vetting Zach but thus far hasn't found definitive proof that he killed Norma Rivera.

Dexter follows Zach to Dr. Vogel's home and wonders if she has taken him him on as a patient. He waits outside until Zach leaves and then confronts Vogel. She tells Dexter that Zach's father contacted her because of her reputation for working with psychopaths, and he’s concerned about his son's propensity for violence.

Dexter discloses to Vogel that Zach likely murdered Norma Rivera and he’s going to kill him if he finds solid proof. To Dexter’s surprise, Vogel says they have a conflict of interest and she won’t further discuss Zach as it would be unethical. Dexter mocks her sudden interest in ethics and she admits to throwing them out the window when her life was on the line. He warns Vogel that she’s bringing another threat into her life, but she casually says, “I treat dangerous people. It's a hazard of the job. Besides, you have no proof that Zach Hamilton is guilty of anything.” She asks Dexter to meet with her if he does find the proof before he kills Zach, but Dexter makes no promises.

Masuka reviews Debra's background report on his daughter, Niki. She appears to be in dire financial straits and he's now convinced she's after his money. However, he admits that he likes having Niki in his life. Deb advises Masuka to wait until she actually asks him for anything before coming to any conclusions. He thanks Deb for her help and hugs her.

Elway brings a new case to Debra. He wants to investigate his sister Susan's boyfriend, Kevin Wyman, a notorious player who frequents a singles bar in a hotel where he keeps a hotel suite. Deb suggests that he talk to his sister about it, but Elway says she doesn't listen to him and he wants to present her with the facts. His plan is for them to work as a couple because it would be less conspicuous. When Deb says she’s uncomfortable going behind Susan’s back, Elway asks if she’s comfortable getting a paycheck.

Dexter helps Harrison with a puzzle as Jamie deals with the laundry. She reminds Dexter of her birthday picnic at Papa’s Cafe in a few days, and says Cassie will be there. She mentions Dexter’s upcoming lunch date with Cassie, remarking that she’s an awesome matchmaker. Dexter replies that she’s an awesome nanny. Jamie says the TV remote is missing and she thinks Harrison hid it, but he denies it.

Dexter is called to a bloody murder scene in Liberty City where a woman was stabbed to death by her boyfriend. Once again, Zach is there with his camera. After the homicide team clears out, Dexter invites Zach to the "other side of the yellow tape." Dexter allows him to take a few pictures of the scene and talks to him about the stabbing. Zach is impressed with Dexter's blood analysis. Dexter thinks Zach is a quick study and is making notes for his next kill. He gives Zach his card and asks to be called after he prints out the photos.

Dexter and Cassie meet for a food truck lunch and she asks what he's passionate about. He doesn’t have much of an answer, except that he has a motorboat. Cassie asks if he water-skis, races, or scuba dives and he says that he only takes it out, turns around, and comes back. Cassie thinks they need more alcohol.

As Elway and Debra are watching Kevin Wyman at a singles bar, he talks about his strained relationship with his sister. Although he can’t change the past, he wants to stop Susan from ruining her future.

After Wyman has no luck picking up a woman, he leaves. Debra suggests setting him up and seeing if he takes the bait. At first, Elway refuses but Deb states that she’s done worse than that while working in Vice. He says that he only needs a few photos of Wyman making advances, and laughs when Deb jokes that she could marry Wyman and pop out a couple of babies.

Zach invites Dexter to his studio and he arrives with a bag of Sadie’s Donuts. Numerous enlarged photos are displayed on the wall with blood the theme. Zach offers to print some for Dexter but he doesn’t need them. “I forget it was a crime scene,” Zach remarks. “Keep thinking that dead chick spilled all that blood just for me.”

Dexter spots a photo of a woman laying on a desk and Zach gets nervous when asked about it. He crumples it up, claims it was a test photo, and tosses it into the trash.

Zach receives a phone call which seems to upset him. “Jesus, are you still drunk from last night or are you starting a new bender?”  After a few minutes, Zach hangs up and tells Dexter that he has to go.

At the station, Deputy Chief Matthews asks Angel about his choice for Sergeant. Angel knows Matthews wants him to pick Angie Miller because she scored higher on the test, has the experience and the track record, plus she’s an African-American woman. Angel defends Quinn, saying that he’s street-smart. Matthews makes it clear he won't be the bad guy. He tells Angel to “grow a set of balls” and make his choice by the end of the day.

Dexter and Debra have steak and beers together like old times but they struggle to find their old comfort level. She tells him about the case she's working with Elway, and he reveals that Vogel was married to a Dr. Richard Vogel.

Jamie has found the missing remote under Harrison’s bed and Dexter wonders if he should be concerned that Harrison is lying. Deb calls Dexter a “doofus” and says Harrison is only four.

Neither are enjoying the tough steak and Dexter says it's not “worth living for,” something Deb once said about his steaks. They decide to order a pizza.

Angel brings Quinn into his office and says he's promoting Miller to Sergeant, calling her the most qualified candidate. Quinn is in disbelief after Angel had pushed him to better his life. Angel defends his decision, saying there’s too much stuff he can’t ignore, such as the “Nadia thing” and the Novikov shooting.

Quinn is determined to solve the Norma Rivera Case. He grabs Dexter and asks for everything he has that points to Zach Hamilton. When Dexter says there’s nothing forensically, Quinn decides to tail Zach. Dexter realizes that if Quinn is stalking Zach, he can’t, so he offers to accompany Quinn as another set of eyes.

On stakeout in a car, Dexter and Quinn watch Zach taking photos of an outdoor yoga class. Quinn brings up Miller, doubting that she’s clean. He says if you dig deep enough on anyone in the department, you find shit. He tells Dexter that he knows what he’s talking about, adding that some people get away with their shit and some don't. Quinn mentions Debra’s strange confession of killing LaGuerta, and Dexter wishes he stayed in his office.

Dexter suddenly notices that one of the women in the class is the same woman in the picture that Zach didn't want him to see.

Debra strikes up a conversation with Kevin at the bar. He tells her about closing a big deal and invites her to his private suite. The two of them flirt at the elevator and when he leans in to kiss her Elway shows up and punches Kevin in the face, telling him "you're done." Elway demands he ends things with Susan that night.

Using her license plate Dexter finds out the woman Zach is following is Sofia Fuentes, an employee of the yacht club Zach's family owns. Dexter breaks into Zach's studio looking for pictures he might have taken of Norma before killing her. On a camera file he sees pictures of Zach taking pictures of Norma just after her death. Zach is visible with a murder weapon.

Dexter brings Vogel proof of Zach's guilt. She already knew and wonders if they should try and teach Zach the code. She "sees something" in Zach, but Dexter disagrees.

At Jamie's birthday party she suggests to Dexter that he needs to move fast on Cassie if he wants it to work. Masuka gives Nikki a check for $5,000, then tells her about his research. She's offended and walked away after returning the check. Jamie starts publicly congratulating Quinn on his promotion before he and Angel have to break the news. She upset with her brother, since it was his idea for Quinn to go after the job. Cassie is having drinks with another guy.

Elway tells Debra that his sister is blaming herself for what happened. He feels like crap even though he got what he wanted.

Before bed Dexter talks to Harrison about the fact he lied about the remote. Harrison by saying that Dexter lies, and proceeds to pull out the toy dog Dexter pretended had gotten lost when it got murder blood on it.

Dexter goes to Zach's studio and sees the kid's car in the garage. He finds a receipt on Zach's desk for a used car and realized he's bought it to kill Sophia that night. Dexter goes to the yacht club and finds Zach waiting in the parking lot. He also sees Quinn watching Zach from inside. Dexter calls Jamie and tells her Quinn is worried she'll break up with him and suggests she invite him over. Quinn leaves his post moments before Sofia gets off work. At this point Zach's father arrives and begins kissing Sophia. Sophia is his latest mistress. Dexter watches as Zach begins to follow his father. He's able to knock him out just before he gets to him.

Dexter puts Zach on the table and asks him what's going on. Zach says he had to kill his father because his philandering is causing his mother to drink herself to death. He hoped killing Norma would do the trick, but his father immediately began sleeping with Sofia. Dexter brings up his interest in crime scenes and suggests that Zach kills because "he wants to kill." The two of them talk about what it feels like to kill. Zach tells Dexter to kill him, because if he doesn't he'll kill again. He says he can't help it. Dexter realizes Zach "never had a Harry" and cuts him loose.

Debra tells Dexter that Elway has feelings for her. She thinks it's only because he doesn't really know her. Dexter tells her he's taking on an "intern." Debra grabs her head, says she feels woozy and falls onto the couch. Something is wrong with Dexter as well. Through blurring visions, he looks at the door and sees Hannah. She says: "Hi Dexter. Remember me?" 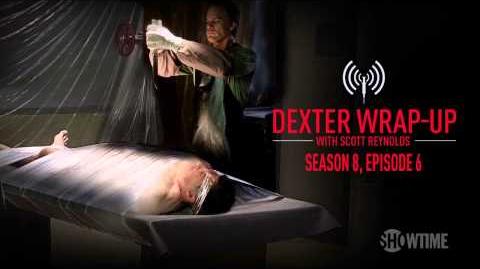