Clyde Phillips
"This Little Piggy" is the fifth episode of Season Eight of DEXTER, and the eighty-ninth overall episode of the series. Directed by Romeo Tirone and written by Scott Reynolds, it first aired 28 July 2013 on Showtime.

The estimated number of viewers for the episode during its original airing was 2.55 million.

Dr. Vogel comes into contact with the Brain Surgeon, and Dexter and Debra try to keep her safe. Meanwhile, Masuka learns that he has a daughter.

Dexter and Debra talk to Vogel about the "accident." Debra points out that she ultimately saved her brother from the sinking car, while Dexter is understandably upset she tried to kill them both. Vogel says Debra is struggling with what she's learned about Harry's suicide. Vogel thinks this was rock bottom and Debra's first step towards recovery. Dexter leaves to find Yates, saying "to Hell with both of you."

Dexter seems irritated by his family, even ignoring Debra's calls. Jamie wants to have Cassie over for dinner in an attempt to set her up with Dexter.

Before the next briefing Masuka tells everybody he has confirmed that Niki is his daughter. Quinn warns him there must be some reason she's shown up in his life. Quinn runs the briefing in Angel's absence, reporting that Janet, the Brain Surgeon's stabbing victim, has survived. They've learned Norma had sex before her death and it was probably consensual. Her ex-boyfriend was out of town, but it's possible she was having an affair with her boss, Ed Hamilton. Angel shows up and says they have an address for Yates.

Matthews takes Quinn aside and tells him the Hamiltons are "good friends" of Miami Metro, and warns him to be very careful in the investigation.

Quinn and Dexter arrive with a warrant to collect DNA from Hamilton. Before the collection he admits to the affair with Norma. His wife found out and insisted she be fired. They had "break-up" sex earlier that day but Hamilton says she left alive. He has security camera proof. On his way out Dexter runs into Hamilton's son, who assures him his father is not a killer.

Yates breaks into Vogel's home while she has tea and attacks her.

Debra calls Vogel to say she needs to talk, and is coming by. She finds evidence of the break-in but Vogel is nowhere to be found.

At Yates' home the police discover he was burying bodies in the backyard. All of the victims were kept alive and tortured for weeks. He would break their toes before ultimately stabbing them. Debra shows up at the crime scene to tell Dexter about Vogel. She wants to help him find Yates. He asks why she didn't let him drown and she says she couldn't imagine her life without him in it. They thinks Yates has probably taken Vogel to a home he's worked in recently.

Elsewhere Yates angrily asks Vogel about Dexter, as a desperate Vogel tries unsuccessfully to reason with him.

A vendor tells Quinn and Miller he spotted Hamilton's son Zach at Norma's place near the time of her death.

Niki tells Masuka she sought him out because her mother recently died and she moved to Miami for school. She has been feeling alone. She asks questions about his financial situation and what kind of car he drives and has Masuka pay for her lunch after ordering.

Dexter realizes it would take days to find which house Yates is holed up in with Vogel. He talks to Angel who tells him Yates has used the same ATM twice in the past few days.

Quinn tells Matthews about Zach and says the vendor has suddenly changed his story. Quinn thinks he was paid off by Hamilton but Matthews tells him not to bring Zach in for questioning.

Debra has Elway help find where Yates might be located. Masuka drops by and asks Debra to privately investigate Niki.

Dexter comes home and finds Jamie, Quinn and Cassie preparing for dinner. He'd forgotten about the set-up and tells Jamie he needs to bail to get some work done. Jamie tells Dexter if he leaves, she'll leave and he'll have nobody to watch Harrison. Debra calls Dexter and they realize there about 20 potential homes Yates could be using. Dexter takes Cassie aside and tells him he needs to leave for work. She's cool with it and they agree to reschedule as Cassie adroitly begs out of the rest of the evening.

Yates prepares to break one of Vogel's toes. She then pretends to be his mother, yelling at him and slapping him. Yates leaves to clean himself up and Vogel calls Dexter from and leaves the 'phone connection open so that he can eavesdrop. Debra has Elway trace the number. While Dexter and Debra race to the location Yates discovers the phone.

Dexter and Debra arrive and find Vogel tied up upstairs. They ask where Yates is, and Dexter spots some blood on the floor. Dexter sees he's hiding under the bed and pretends not to see him as Debra moves Vogel to safety. Dexter then takes a massive curtain rod and impales Yates through the bed.

After the rescue Vogel thanks them both for saving her. The three talk about the matter, and Debra appears to have come to some sort of acceptance of the situation.

Dexter, Debra and Vogel dump Yates' body in the ocean. Vogel asks why he wanted them to come. He says, "I wanted to be with family."

Dexter thrusts a rod through bed to kill A.J.

Accompanied by Debra and Evelyn, Dexter dumps A.J. Yates' body
Add a photo to this gallery 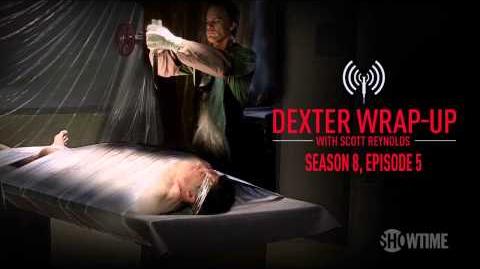