"Scar Tissue" is the fourth episode of Season Eight of DEXTER, and the eighty-eighth overall episode of the series. Directed by Stefan Schwartz and written by Tim Schlattmann, it first aired 21 July 2013 on Showtime.

The estimated number of viewers for the episode during its original airing was 2.47 million.

Dexter tracks down another potential killer from Dr. Vogel’s list. Quinn celebrates his passing of the Sergeant’s exam by defending Debra’s honor in a fight. Dr. Vogel begins treating Debra for her PTSD.

Debra and Vogel are at the site where she killed Maria. Vogel wants her to talk about what she saw that night. She thinks Debra repressing is the issue. Debra is having trouble trusting Vogel.

Dexter process the scene of a murder. It's a woman named Norma and Dexter believes she was killed by someone she knew. And ex named Roberto is the first suspect. Angel tells Quinn he "nailed" the sergeant exam.

Vogel tells Dexter he should prepare for the possibility that Debra may never want to be in his life again. Dexter can't accept this. His next Brain Surgeon target from her book is AJ Yates, a cable installer who was institutionalized at fifteen.

Dexter spots a strange scar on the back of Yates' head. He wonders if this is something Vogel had done.

Vogel shows Debra video of Harry talking to her about Dexter's budding murder career and the code. She tries to convince Debra that Harry wasn't wrong in sparing Dexter's life but Debra isn't convinced. Dexter rings the doorbell and wants answers regarding Yates' scar. She takes him outside (away from Debra) and tells she had recommended a lesion be removed from his brain in the hopes it would stop his behavior. Dexter stresses that he needs Debra in his life and wants her eventually forgive him. She thinks Dexter needs Debra as a mirror that shows him not to be a monster. She tells him he's within the natural order of things and doesn't need Debra.

Dexter finds Yates' place empty. He finds evidence that Yates still has a relationship with his elderly father.

Jamie tells Dexter that he made "quite an impression" on Cassie and tells him that she's single.

Vogel locks her and Debra in the storage container where she shot Maria. She forces her to confront her feelings about what happened. She suggests that Debra is bothered by the face she knows in her heart she'll always side with Dexter. Vogel wants her to realize that she's a good person who made the best of a bad situation.

Dexter gets three hits on the partial prints from the shoes at Yates' place. All are missing women.

Quinn apologizes to Angel for his behavior. Angel tells him he needs to solve the case.

A young woman named Nikki stops by Masuka's office and says she may be his daughter. He was a sperm donor in college.

Elway finds a sober Debra hard at work in her office. He orders some food and helps her. The two talk about family and continue connecting.

Dexter returns to Yates' place and finds it has been cleaned out. He spots the secret room and realizes that Yates knew he had been there. He finds evidence that Yates is The Brain Surgeon. Dexter also finds a gravely injured woman and brings her to a doctor. He brings Vogel to Yates home and the two look through his computer. They find Vogel's files on his computer and Dexter sees that she'd been keeping notes on him. He's mad that he's basically her lab rat and say their relationship ends once he takes care of Yates.

Debra looks through Vogel's video files and finds an interview with Harry where he talks about having helped Dexter with one of his killings. Harry didn't think he'd be able to live with what he had done and Debra wonders to herself "Fuck, but I'm supposed to?"

Yates gets a call from the retirement home that his father's heart is failing. The call was placed by Dexter, who is standing next to his bed. Yates arrives and Dexter corners him. But Yates disconnects his father's ventilator and escapes when the nurses arrive.

Angel asks Dexter to run the blood on Janet Thorton, the woman he found at Yates' place.

Debra tells Quinn to do what he can to "make it work" with Jamie. Debra then spots Dexter and says they need to talk.

Debra and Dexter go for a ride and agree that Vogel doesn't understand them. They talk about the videos and Debra references an "interesting" one from right before Harry's death. She asks Dexter if Harry committed suicide and Dexter confirms that he did. She says she thinks she understands how Harry felt, but says Harry "only got it half right" before jerking the car's wheel and sending them into a lake. A fisherman swims out and saves Debra. Dexter is still stuck in the car and Debra watches as the car sinks. The episode ends with Debra bringing Dexter to safety.

Dexter accuses Vogel of using him like a lab rat 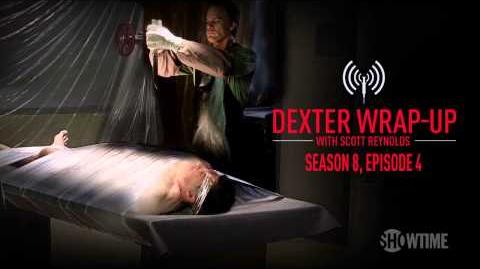 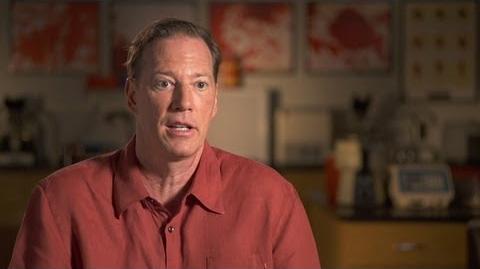 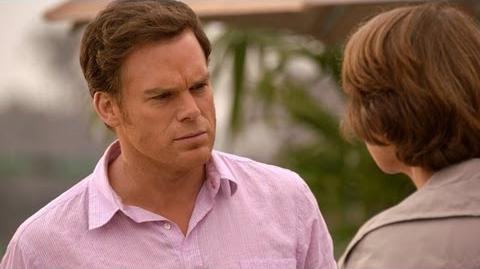 Dexter Season 8 Episode 4 Clip - Next on the List
Next on the List
Add a photo to this gallery
Retrieved from "https://dexter.fandom.com/wiki/Episode_804:_Scar_Tissue?oldid=124590"
Community content is available under CC-BY-SA unless otherwise noted.