Clyde Phillips
What's Eating Dexter Morgan? is the third episode of Season Eight of DEXTER, and the eighty-seventh overall episode of the series.[1] Directed by Ernest Dickerson and written by Lauren Gussis, it first aired 14 July 2013 on Showtime.

The estimated number of viewers for the episode during its original airing was 2.43 million.

Dexter continues his manhunt for the Brain Surgeon. Dr. Vogel tries to prove to Dexter that he's perfect as a psychopath. Debra's PTSD kicks in and she makes a desperate plea.

The Brain Surgeon re-stages the crime scene where he killed Sussman (initially placing Sussman's corpse on a meat hook), so that it appears as though Sussman blew his brains out with a shot gun. This convinces the police that Sussman was the Brain Surgeon and killed himself out of remorse.

He later sends pieces of Sussman's brain (the occipital lobe, responsible for vision) to Vogel, labeled "His" and "Hers", inside small gift containers. Dexter concludes that this indicates that the killer is aware of both of them and is watching. Going through Vogel's list of patients,

Dexter vets Ron Galuzzo, a man who killed his best friend as a child, but initially had Vogel convinced that it was actually a bully who committed the murder. This also turns out to be a dead end, as Galuzzo is revealed to be a cannibal.

Meanwhile, Debra nearly gets a DUI, but Quinn helps her get off the hook. She and Dexter later have dinner and Dexter shows her the video recorded in the past, where she saved numerous innocent people during a restaurant shoot-out, in order to convince her that she is a good person.

A little earlier, she and Elway hired by a woman who suspects her husband of cheating on her. After showing some snaps of the husband putting his face in the breasts of another woman, the wife is totally in denial refusing to believe what she sees before her and ceases her quest to find out about her husband's lewd behavior. This influences Debra to stop being in denial by going to the police station (while in a drunken state) with the intention of confessing to LaGuerta's murder. She tells Quinn what she's done, but the latter simply thinks she's talking nonsense due to being drunk. He thinks that Debra simply feels guilty for LaGuerta's death, because she knew that she was heading to the shipping yard, where she met her final end (apparently at the hands of Estrada).

Quinn calls Dexter, telling him what's happening and he and Vogel quickly go to the station to stop Debra from taking it any further. Vogel tells Quinn that Debra is suffering from 'surviver's guilt', a constituent of post-traumatic stress disorder. Dexter finds Debra in the interview room and after she tries to leave and publicly confess, he injects her with a small dose of M99. When Quinn comes inside, he tells her that Debra passed out. Dexter and Vogel take her home and Dexter asks Vogel to help Debra deal with her problems. He still feels guilty for the state Debra is in.

At the end of the episode, Dexter kills Galuzzo, calling him 'disgusting' for being a cannibal, although he admits that both of them are alike in some respects.

Debra is found drunk in her car

Jacob Elway and Debra with a client

Debra and Jacob Elway taking photos of a cheating spouse 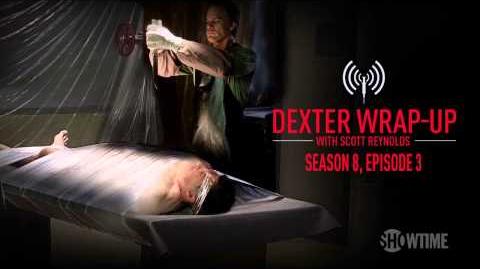 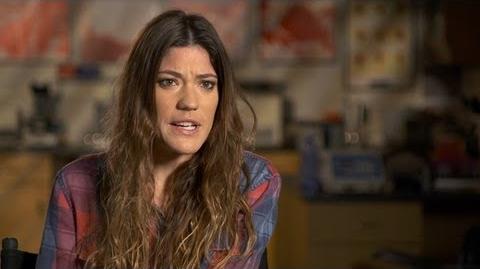