A Beautiful Day is the first episode of Season Eight of DEXTER , and the eighty-fifth overall episode of the series. Directed by Keith Gordon and written by Scott Buck, it first aired 30 June 2013 on Showtime.

The estimated number of viewers for the episode during its original airing was 2.48 million. [1]

Six months have passed since Debra shot LaGuerta. She has exchanged her career at Miami Metro for a PI job at a private security firm and has gone undercover for a case. Meanwhile, Miami Metro is investigating the murder of a man who is missing a specific piece of his brain. The team gets assisted by Dr. Evelyn Vogel, who seems to have a particular interest in Dexter.

Dexter thinks that Maria's death "got me back on track." Six months later, his life appears to be going great.

Dexter attends the dedication of a memorial bench in Maria's honor. After the ceremony Angel thinks a bench isn't the right way to honor her. He seems still to be struggling with her death. Maria's death brought Angel back to police work, but it sounds as if Debra quit immediately following her death. Quinn tells Dexter he hasn't heard from Debra recently.

Debra is doing drugs with a man with whom she appears to be romantically involved in a hotel room. He seems to be a criminal of some kind.

Dexter drops by Debra's place to look for her. He tells Harry he hasn't seen her in two months. Dexter sees a mixture of prescription and recreational drugs and grows concerned.

Dexter goes to Debra's job, a place called Elway Investigations run by a former Miami Metro officer. Elway hasn't heard from her in two weeks, the longest such delay. She's been working a smash-and-grab case involving someone named Andrew Briggs.

The latest case is Robert Bailey, a fortyish gunshot victim who had the back of his head cut open and a piece of his brain removed. He was then dumped at a different location with the murder weapon.

Dexter investigates Briggs, who we recognize as the man she's been hanging out with. He stole $500,000 in jewelry and skipped on his bail. He has a history of violence. Dexter hacks her credit card info and learns where she's been the past few weeks.

Dexter finds Debra and Briggs and sees they're all over each other. He confronts her in a store and she claims to still be working the case. She's waiting to get all of the stolen good from Briggs. She says she hasn't been returning his calls because she hates him for making her compromise her values. Debra and Briggs leave together.

Dexter tells Harry he thinks Debra is using her job to escape from reality. He then has a road rage incident where he chokes a man who cut him off.

Quinn and Jamie are secretly dating. Angel talks to Jamie about Maria as he goes through her personal stuff.

The department is introduced to Dr. Evelyn Vogel, a neuropsychiatrist there to help on their latest case. Vogel has noticed that the part of the brain removed was the piece that processes empathy. She wonders if the killer is trying to communicate though the victim. The victim was likely held captive and she thinks they are looking for a serial killer.

Dexter is concerned that someone like Vogel will be working so close to him. Angel gives Dexter a gift of a vase, one of Maria's possessions. During the conversation Dexter slips and says Maria died because "she couldn't leave things alone."

Briggs meets with a potential fence known as El Sapo. When he leaves the room, Debra calls Quinn and asks him to look-up the guy. Briggs comes back and tells her things went well.

Vogel brings Dexter down to the morgue. She's looking at Bailey's brain. After asking for a few updates on the case, Vogel starts to talk about how the two of them got to their respective careers. She brings up the Bay Harbor Butcher and asks about Doakes. Vogel believes the Butcher operated with some moral guidelines and says she wishes she could have interviewed him. Dexter says "Sorry."

Dexter asks Matthews about Vogel and how she got to the case. It turns out she called him "out of the blue." He wonders internally if he is the reason Vogel made contact.

Quinn tells Dexter that Briggs robbed a mafia store and nobody is willing to buy his merchandise other than the mob. Nobody has heard of El Sapo.

That night Briggs gets a call from El Sapo. He's going to stop by with the money and Briggs will take him to the merchandise. Briggs doesn't want Debra around when he arrives, in case the man is dangerous.

Dexter looks up El Sapo and finds out he's a hit man. Harrison accidentally smashes Maria's vase and Dexter snaps at him. Dexter tries to call Debra but her voicemail is still full.

Dexter puts Harrison in the car and goes to Quinn's place. Quinn gives him the name of a hotel where Debra had been staying. Dexter then calls Jamie so she will take Harrison but she is with Quinn and does not answer her phone so Dexter brings Harrison to the motel with him to get Debra. He falls asleep in the car and Dexter leaves him to look for her. He spots Debra and Briggs in one of the rooms and is able to make contact with Debra.

She is deeply enraged the moment she sees Dexter outside the door of the Pink Motel where she and Briggs are staying, and orders him to go away. He tells her about El Sapo and she says she doesn't care if she dies. Hearing them argue, Briggs opens the door and steps outside. He recognizes Dexter from the store and tells get to go away. Dexter is simply fed up with everything and tries to forcibly take Debra with him, but Briggs shoves him away from her. Dexter, deeply infuriated, pushes Briggs through the door, punches him in the face, and stabs him in the heart as Debra watches in horror. She still has no interest in going with him. He offers to help hide the body but Debra refuses. Debra calls the police while telling Dexter to leave, which he quickly does. While waiting for the police to arrive, Debra goes through Briggs' pockets and finds the key to his storage locker.

Dexter returns to his car to find Harrison missing. He calls out to Harrison and his son appears, looking for his father. Dexter picks him up with one hand covered in blood.

Debra tells the police she returned to the motel after getting a sandwich to find Briggs dead and has no idea who might have wanted to hurt him. She leaves the scene and gives Elway an update, saying she might have a lead on the merchandise. Outside, Guzman is watching the entire time, and he realizes that Briggs is dead and his only way of retrieving the jewels is through Debra.

At home, Dexter tries unsuccessfully to wash out the blood from Harrison's stuffed dog toy. Dexter thinks Debra may have been right that he is "lost" as a person and is unable to let her go. Without Debra, he's not sure who he is anymore.

Dr. Vogel approaches Dexter while he's sitting on Maria's bench. He tells her he's not in the mood so she leaves him a folder. Inside are gory drawings that Dexter made as a child. He chases her down and pins her against a wall. Dr. Vogel tells Dexter he can't kill her and when he asks why not, she responds with, "Because I don't fit Harry's code."

The first victim of The Brain Surgeon 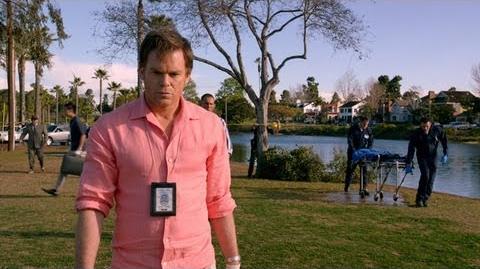 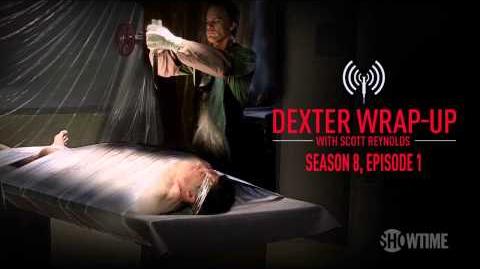 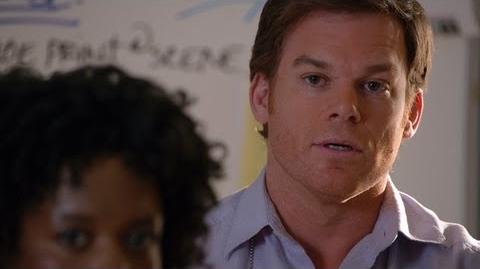 Retrieved from "https://dexter.fandom.com/wiki/Episode_801:_A_Beautiful_Day?oldid=100375"
Community content is available under CC-BY-SA unless otherwise noted.