Clyde Phillips
Surprise, Motherfucker![1] is the last of twelve episodes in Season Seven of DEXTER, and the eighty-fourth overall episode of the series. Directed by Steve Shill, and written by Scott Buck and Tim Schlattmann, it premiered 16 December 2012. The estimated number of viewers for the episode during its original airing was 2.75 million.[2]

LaGuerta is on the verge of exposing Dexter and his killer ways, while he does his best to cover for himself and Debra, and maintain the life he's created.

Dexter visits Hannah McKay in jail, after giving Deb the evidence that incriminated Hannah for the murder of Sal Price. Hannah confesses that she poisoned Deb because she was trying to keep them apart. She promises to keep Dexter's secret and is angry that he did not do the same for her. Hannah asks Dexter to get rid of the evidence so they can run away together, but Dexter refuses. The two kiss and Hannah bites Dexter's lip. After he leaves, Hannah calls Arlene, desperate to get out of jail, and begs for her help.

At his apartment, Dexter plays with Harrison while Jamie cleans up. Harrison asks for Hannah, and Jamie explains to him that she had to go away. Maria LaGuerta appears at the door with two officers and arrests Dexter for the murder of Hector Estrada. Jamie insists that it must be a mistake.

Dexter is marched through the police station in handcuffs, causing an uproar. When LaGuerta says that she has proof Dexter is the Bay Harbor Butcher, Angel Batista angrily states that Doakes is the Bay Harbor Butcher and asks if she's lost your mind. Debra orders the handcuffs to be removed, but LaGuerta instructs her to stand down and to recuse herself since she is family.

LaGuerta brings Dexter into the interrogation room and accuses him of killing Estrada. He denies it, claiming that after going fishing, he went home to be with his son. She presents photos of Dexter carrying black garbage bags onto his boat. He explains that they contained ice to keep fish cold because his cooler was broken. One of the photos shows Dexter throwing a garbage bag into a dumpster, and Dexter says he was throwing away his dinner from Franco’s. LaGuerta disputes this, stating that the bag contained Estrada's wallet and his bloody shirt. She tells Dexter to admit that he's the Bay Harbor Butcher. He accuses her of being blinded by her loyalty to Doakes.

At that moment, Vince Masuka and Debra Morgan enter the room. Masuka had run tests on the bloody shirt and, though it is Estrada’s blood, he found an evidence number that proved that it's the shirt he was wearing when arrested in 1973... and it's missing from inventory. Also, the wallet had LaGuerta's partial print on it. Deb accuses LaGuerta of trying to frame Dexter, and he is released. Both LaGuerta and Debra realize that Dexter had planted the evidence to make it look as if LaGuerta had framed him.

In the elevator, LaGuerta confronts Dexter about setting her up and remarks that Doakes always knew there was something wrong with him.

Dexter has a flashback to when he and Sergeant Doakes worked on a case involving a prostitute killer. This marks the first chronological instance in which Doakes uses the catchphrase "Surprise, Motherfucker!" LaGuerta beckons Doakes and Dexter watches as she returns a key to him. Doakes notices Dexter nearby watching them and is unsettled. He calls Dexter "invisible."

Angel warns LaGuerta to back off from Dexter before she ruins her career.

Back at Dexter's apartment, Dexter defends his actions to Deb, saying that he handled the situation with LaGuerta as best he knew how without killing her. Dexter realizes that he needs to find Estrada and kill him before LaGuerta discovers that Estrada is at large.

Dexter visits Estrada's wife, Florencia, pretending to be Hector's parole officer, Arthur Curry. She claims to have not seen Hector in years, but Dexter knows that she is lying and believes she will lead him to Estrada. While waiting outside her house, Dexter has another flashback to the prostitute killer case, when they found a body on a dock. He becomes excited when reenacting the storyline of the killing to Doakes, allowing Doakes to see glimpses of his true self.

Thomas Matthews visits LaGuerta in her office and tells her that the Commissioner has opened an investigation into her conduct. Matthews reluctantly agrees to try to help her, but he advises Maria to keep her head low and start doing her job.

Meanwhile, Debra shows up at Hannah's arraignment. While they walk to the courtroom, Deb tells Hannah to confess and save herself the time. In return, Hannah criticizes Deb for not arresting her brother. Deb is clearly affected by Hannah's comment that she is a hypocrite for being the lieutenant of homicide but ignores the law whenever Dexter is involved. Hannah is charged with First Degree Murder and is denied bail. Arlene slips Hannah a pill while the two embrace, and Hannah swallows it as she leaves the courtroom.

Angel Batista asks LaGuerta to go to his retirement party and straighten things out with Dexter. She agrees.

While being transported back to jail, Hannah has a seizure caused by whatever Arlene gave her. She is taken to the emergency room at Seward Memorial Hospital.

LaGuerta calls Debra into her office and apologizes for accusing Dexter. She begins to question Debra about the timeline of Travis Marshall's death. Deb agrees with Dexter's report that he was alone at the church the night before they found Travis' body, doing the final forensic sweep. LaGuerta then pulls up a security video from a gas station two blocks from the church, showing Deb filling a gas can. Deb "suddenly remembers" bringing Dexter some food at the church. LaGuerta suggests that Debra made a mistake while trying to protect Dexter, and warns that she will continue her investigation.

Dexter follows Florencia Estrada into the park, where she meets Hector, giving him food and a pistol. Dexter lures Estrada to his car, where he drugs Hector and throws him into the trunk. Dexter and Debra meet at a construction site and talk in Dexter's car. Dexter apologizes for dragging Deb into the mess with LaGuerta, and says he will handle it. He says he will find out what evidence LaGuerta has against them before he makes a move. A noise in the back of the car startles Deb and Dexter tells her that it's Estrada.

At the hospital, Hannah manages to escape.

Dexter breaks into LaGuerta's house and finds warrants allowing her to track his and Debra's phones on the night of the church fire. "Harry" advises Dexter to run away with Debra and Harrison, but Dexter decides to kill LaGuerta instead.

In another flashback Dexter brings doughnuts to the station and offers one to Doakes, who snaps at him. Doakes is angry at himself for getting involved with LaGuerta, and Dexter gives him advice, remarking, "Never jump the fence if you're not willing to face what's on the other side". Doakes recognizes the quote, having seen it in a journal kept by Walter Munro, the prime suspect for the prostitute murders. When Dexter can't satisfactorily explain how he knows the quote, Doakes' suspicions against Dexter are aroused. He tells Dexter that there's something off about him, and calls him "fake" and a "creep motherfucker." He pledges to find out what Dexter is hiding.

LaGuerta receives a call from Estrada while driving to Angel's retirement / New Year Eve's party at Papa's Cafe. Estrada tells her that he is back at the shipping yard in the same container and needs her help. LaGuerta immediately heads to the shipping yard - alone. Hector begs Dexter to let him go now that he followed Dexter's instructions. Dexter asks Estrada if it was hard for him to make the decision to kill his mother, but does not believe Estrada's claim that it was the "hardest decision" of his life. Estrada calls Laura a snitch and says what he did was a matter of survival. When Estrada asks Dexter what kind of killer he is, Dexter says, "I'm just a creep motherfucker," and stabs him in the heart.

At Angel's party, Joey Quinn and Jamie Batista enjoy each other's company. To the chagrin of Angel, Masuka plans on dressing up as Baby New Year. Neither LaGuerta or Dexter are in attendance. Deb calls dispatch and finds out that LaGuerta's car is headed towards the shipping yards. Realizing that Dexter is luring LaGuerta into a trap in order to kill her, Deb calls him, but his phone goes straight to voicemail. She leaves a message, pleading, "Dex, it's Deb. Whatever you're thinking of doing, please don't do it."

Hannah sets a flowering plant outside Dexter's door and calmly walks away.

LaGuerta enters the shipping container and finds Estrada dead. Before she can do anything, Dexter sneaks up from behind and injects her with M99. Dexter's plan is make it look like LaGuerta and Estrada shot each other. Deb arrives and just as Dexter is about to kill LaGuerta. Deb begs Dexter not to do it, and says she won't let him go through with it. LaGuerta wakes up and orders Deb to shoot Dexter, calling her a "good person." Dexter agrees that Deb is a good person, drops his knife, and tells Deb, "Do what you gotta do." Deb impulsively shoots LaGuerta, then runs to her side, sobbing.

Afterward, Deb and Dexter walk through a crowd at Angel's party for an alibi. Dexter thinks, "We all make rules for ourselves. It's these rules that help define who we are. So when we break those rules, we risk losing ourselves and becoming something unknown. Who is Deb now? Who am I? Is this a new beginning? Or the beginning of the end?"

Above, in the night sky, multi-colored fireworks turn blood-red.

Dexter says he had no other choice

Maria brings Dexter to the station

Maria presents photos she took of Dexter the night before

Photos of Dexter carrying bags onto his boat

Maria accuses Dexter of being the Bay Harbor Butcher

Masuka with evidence apparently showing that Maria set up Dexter

(flashback) Doakes asks Maria not to end their relationship

Angel warns Maria she could lose her job

Deb upset about Maria and worried about Hannah

Dexter visits Florencia Estrada, pretending to be a parole officer

Maria wants Matthews to support her

Deb and Hannah banter in courthouse

While being transported to jail, Hannah has a seizure

Hannah is rushed to the hospital

Maria questions Debra about the night of the church fire

Footage of Debra getting gas prior to the arson

Dexter follows Florencia to her meet with Estrada

Boy throws a ball at Estrada, who then chases after him

Dexter sedates Estrada, throws him in his car

Dexter breaks into Maria's house, finds warrants for his and Deb's phones

Dexter decides that killing Maria is his only option

(flashback) Doakes calls Dexter "fake" and accuses him of hiding something

Dexter stabs Estrada in the heart

Dexter begins to set up the scene

Deb and Dexter at Angel's party for an alibi

Hannah has a visitor 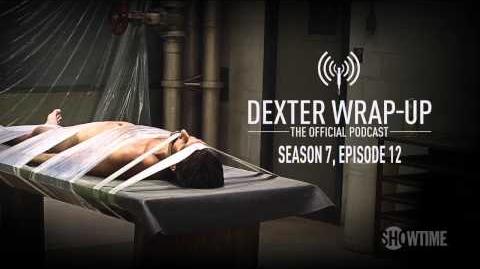 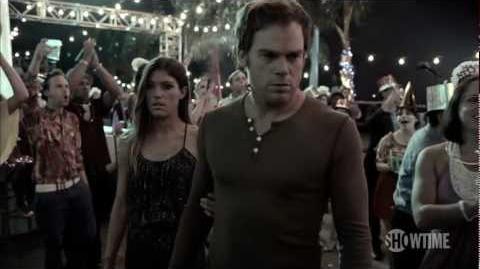 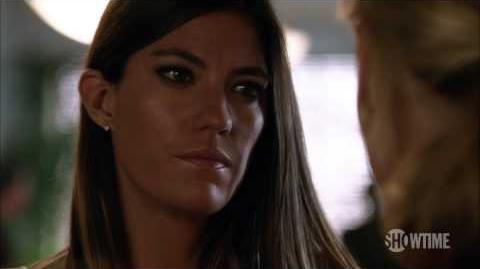 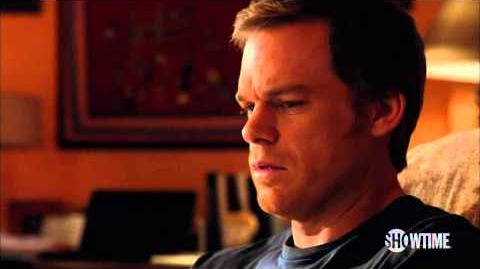