Clyde Phillips
Do You See What I See? is the eleventh of twelve episodes in Season Seven of DEXTER, and the eighty-third overall episode of the series. Directed by John Dahl and written by Manny Coto and Wendy West, it first aired 9 December 2012 on Showtime.

The estimated number of viewers for the episode during its original airing was 2.60 million.[1]

It's Christmastime, and Debra learns it may be better to receive when she gets a tip from Hannah's father, one that could lead to incriminating Dexter in a crime. Meanwhile, Dexter discovers that the man behind his mother's death has been released from prison.

Dexter muses to himself that he's never really thought about his future. He gets a call from Florida Department of Corrections telling him Estrada, the mastermind behind his mother's murder, is up for parole. Dexter tells Hannah that Hector Estrada is one of the men responsible who is still living.

Dexter sits in on Estrada's parole hearing. When the chairman of the Parole Commission asks if anyone wishes to speak for or against the prisoner, Dexter says nothing, Estrada is granted parole.

Angel tells Debra he's found Arlene Shram, who has battled drug addiction and at various points has lost custody of her kids. He wonders if they should tell Dexter, but Debra tells him it's her call.

Debra meets with Arlene. She threatens custody of her children unless Arlene testifies about Hannah poisoning their counselor. Arlene says she'll need to think about it.

Dexter tells Debra about his conversation with Matthews. His plan is to plant fake evidence -- a boat -- that will prove Doakes was the Butcher. Debra offers to help, but Dexter says he can handle it.

Maria debates Matthews and says she would have known if Doakes had a boat.

Arlene meets with Hannah. She says she doesn't want to rat her out, but she also can't go to jail or lose her kids. Hannah says she'll "figure something out."

Debra waits for Maria to leave her house, then heads inside.

Jenna, one of the strippers in Nadia's club which is still in business despite George Novikov's death, tells Quinn that Nadia left several days earlier for Vegas. She said she needed a new start.

Matthews and Maria search through the stuff from the cabin where Doakes died. They find a deep sea lure in a tackle box, along with a key for a boat storage facility. At the boathouse they find some knives, one of which contained Doakes' fingerprints. Maria takes Matthews aside and reminds him Dexter has the skills to plant such evidence. Maria admits she feels she owes it to Doakes to clear his name. Matthews says he's done and expects her to live up to her end of the deal about his pension.

Hannah meets with Debra. She tells her that Dexter has been through a lot and this seems like the first time he's been looking forward to the future. Hannah thinks he'll be happy if the two of them could find some common ground. Debra says the reason she won't rest until Hannah is in jail is because of how much she loves Dexter.

Dexter meets with Matthews again. He tells Dexter about the evidence they found and that he doesn't think Maria will be bugging him anymore.

Dexter meets with Estrada under the pretense he has Cuban cigars he needs to move. They agree to meet that night. Angel calls Dexter to tell him Debra's been in a car accident.

At the hospital, Dexter learns that Debra is basically okay. An excessive amount of her anti-anxiety medication was found in her system. Angel tells Dexter she was on her way to a second interview with Arlene. When Debra wakes up she seems sure that there is no way she could have accidentally taken extra pills. Debra thinks Hannah must have done it, but Dexter doesn't think it makes sense.

Dexter searches for evidence that Hannah did or didn't poison Debra. He ends up taking Debra's water bottle from her wrecked car and plans to send it to the lab.

Angel tells Maria he likes life as a restaurant owner. He says he's planning on retiring after the new year.

Dexter and Hannah talk about past relationships. She says she finally wants to stay with somebody. He tells her he has to meet Estrada, then asks her whether she had anything to do with Debra's accident. Hannah makes a convincing case for why it couldn't have been her, saying she never viewed Arlene as a threat and if she had targeted Debra she would have finished the job. She says he needs to figure out what kind of future he wants to have and shows him the door.

Dexter meets with Estrada and after a brief struggle in which the desperate parolee is able to fire a wild shot, knocks him out with a needle to the neck. He gets him on the slab and tells him who he is. Estrada starts talking about Dexter being in cahoots with the female cop who put a rush order on his release. Dexter quickly realizes Maria is trying to trap him and stops short of killing Estrada.

Maria meets with other officers, one of whom has been trailing Estrada, at the scene where Dexter had set up his kill room. They open up the storage unit Dexter was using and find only the plastic wrap and the chainsaw with which he was going to exact his revenge.

Dexter is trying to flee the scene quietly with Estrada who ends up jumping in the water and forcing Dexter to leave on his own.

Dexter gets a call that Debra's water bottle contained an extremely high amount of anti-anxiety med. This convinces Dexter that Hannah actually was trying to kill Debra.

Dexter gives Debra evidence, the poison-treated pen that will convict Hannah of writer Sal Price's murder. He tells her "as long as she's free you're not safe."

Dexter pays Hannah a visit. They kiss but she senses something is wrong. Dexter quietly tells her "I'm sorry." The police arrive and place her under arrest. Hannah tells Dexter "You should have killed me." 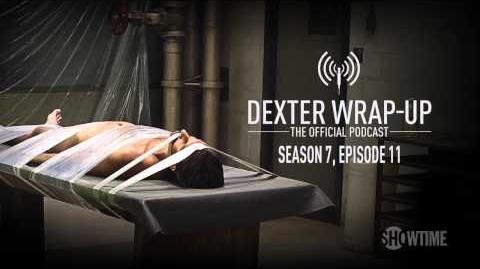 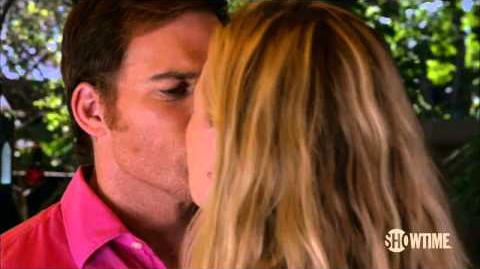 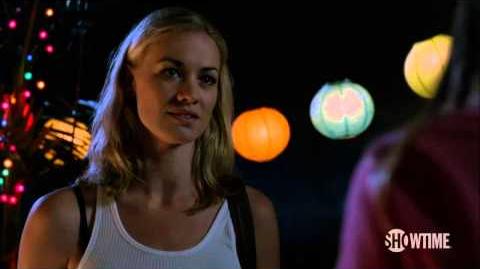 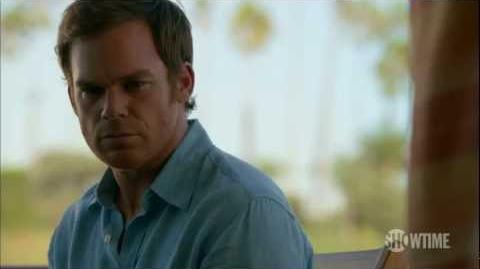