The Dark... Whatever[1] is the tenth of twelve episodes in Season Seven of DEXTER, and the eighty-second overall episode of the series. Written by Lauren Gussis, Jace Richdale and Scott Reynolds and directed by Michael Lehmann,[2] it first aired 2 December 2012. The estimated number of viewers for the episode during its original airing was 2.08 million.[3]

Dexter is unnerved when Hannah's father pays him a surprise visit; the Phantom Arsonist's crimes become more vicious; and Quinn defends Nadia's honor and finds himself in a volatile situation. Meanwhile, LaGuerta asks a former superior for help on the Bay Harbor Butcher case.

Miami Metro is investigating yet another attack by the Phantom Arsonist in which a mother and her six-year-old daughter were burned to death in a public restroom at a restaurant. Dexter watches as Bosso indifferently gazes at the dead child, raising his suspicions that Bosso is the Phantom Arsonist.

At Hannah's house, Dexter informs her of the recent murders which leads to Hannah questioning Dexter's urges. Dexter explains that his Dark Passenger forces him to, which Hannah refuses to believe. Hannah's abusive father, Clint, then shows up. He insists to Hannah that after leaving jail he is a changed man and wants to make it up to her.

Dexter looks into Bossos' records which leads him to following his truck. He finds his truck and looks inside, finding electric fuses and camping fuel. However, Bosso shortly arrives and it turns out that he is a Civil War enactor for the South. However, The real phantom arsonist enters a public bus and nervously dons a silver suit. He then squeezes fuel onto the passengers and, in their horror, sets a portion of the bus alight.

Back at Hannah's place, Clint discusses a possible investment in which Hannah will pay him $20,000 to startup his new crawfish business. Hannah politely refuses, which Clint takes as an insult and furiously leaves in his truck. Dexter discourages Hannah from trusting him, but she insists that there is still good in him. However, her garden is almost completely destroyed after Clint's pickup truck smashes into it. Clint first acts as though it was a drunken accident but then ridicules and fills Hannah with guilt by yelling that she was at fault for her mother's death. Dexter puts him in a choke hold and angrily tells him to leave.

LaGuerta looks through Bay Harbor Butcher suspects and narrows it down to Dexter. She plans on visiting the cabin where Doakes died.

Quinn and Batista go to The Fox Hole where Novikov is going to sell Nadia to a sex club. Quinn then kills Novikov and stages it as self-defense, shooting his own arm in the process.

The Phantom's fingerprints don't match any criminals in the Miami Metro database, but Dexter believes that the fires may have begun when the Phantom was a juvenile because he relates "It's Bobby" to Astor and Cody blaming each other. Dexter brings the fingerprint to a juvenile facility where he tracks the fingerprints to Joe Jensen, who had a history of arson and had just been released a month earlier.

LaGuerta discovers that the cabin where Doakes died was rented to drug dealer Jiminez, who is linked to Dexter's childhood. LaGuerta reasons that Dexter has a better motive for killing Jiminez than Doakes did.

Dexter hides in Jensen's house where he almost kills him, but realizes the irony that both Jensen and himself used childhood traumas as an excuse to kill. He instead leaves Jensen for Miami Metro, with subtle signs for Debra to show that he didn't kill him.

Clint blackmails Dexter into giving him the $20,000 in exchange that he won't tell Miami Metro that Hannah had poisoned a counselor in front of Arlene Shram. Dexter kills him instead. When he returns to Hannah, he finds that she had withdrawn the blackmail money from her bank, but Dexter assures her that she won't be seeing Clint ever again.

It is revealed that before Clint gave Dexter the chance to pay the blackmail, he informed Miami Metro of Arlene Shram, anyway.

Dexter having dinner with Hannah and her father, Clint 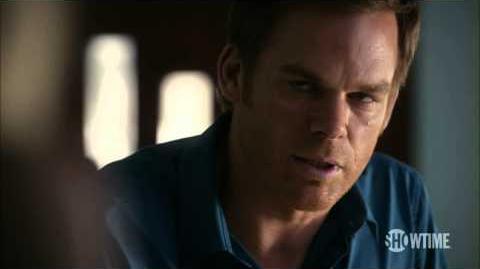 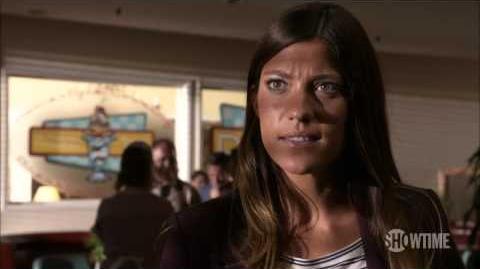 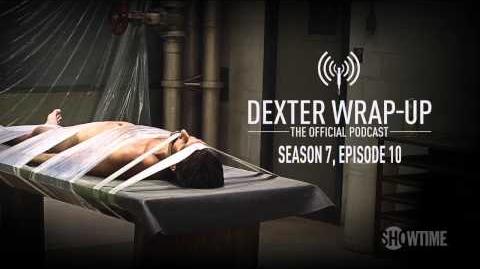