Clyde Phillips
Helter Skelter[1] is the ninth of twelve episodes in Season Seven of DEXTER, and the eighty-first overall episode of the series. Directed by Steve Shill and written by Tim Schlattmann, it first aired 25 November 2012 on Showtime.

The estimated number of viewers for the episode during its original airing was 2.12 million.[2]

As Dexter scrambles to track down Isaak, a power struggle erupts among the Koshka Brotherhood, which could prove to Dexter's advantage. Meanwhile, Miami Dade tries to smoke out the Phantom Arsonist.

Dexter is taking Hannah out on his boat. She's deathly afraid of the water, a product of her father throwing her into a lake to sink or learn to swim,when she was little. She tells a sad story of him not letting her out until she nearly died. Dexter gets a call about a body.

Isaak's bodyguard, Jurg Yeliashkevych, tellshim that the Brotherhood has sent two men to kill him and they are probably already in the country. Isaak seems particularly concerned about the skill of the men. He calls one of them, Oleg Mickic who has done work for Isaak in the past, who happens to be shopping for a sniper rifle at the time. He tells Isaak he's already accepted the contract, so there is nothing he can do.

Isaak shows up at Dexter's door. He tells him about the men trying to kill him. He wants Dexter to help him and offers him a pass on his revenge if he does. Dexter says he'll take his chances and tells Isaak to leave.

Dexter has a body, a burn victim in a car. Arson Squad Inspector Phil Bosso finds some accelerant in the back seat. The victim is a paralegal. The investigator thinks it's a suicide. Dexter takes Debra aside and says he's glad she said what she said about being in love with him. He points out they've been the only constant in each other's lives, which makes it logical. Dexter gets a message to meet Hannah later.

When Dexter arrives home he finds Isaak waiting for him. He's kidnapped Hannah and tells Dexter the only way she'll be safe is if he helps him get rid of the hit men stalking him. Dexter eventually agrees after getting confirmation Hannah is safe with Isaak's man, Jurg.

Isaak tells Dexter about the two men trying to kill him. The European, Mikic, likes using sniper rifles. The other, an American named Benjamin Caffrey, prefers his kills up close. Issak says Mikic always likes to test out his weapon, which clues Dexter in to the fact he'll have to seek out a range carrying the kind of ammo for the rifle he prefers. Isaak asks Dexter about why he kills people but Dexter isn't interested in talking.

Dexter tells Debra about his deal with Isaak, explaining about his forced partnership to save Hannah.

Maria LaGuerta pays a visit to the boss she forced into retirement, Thomas Matthews, on his boat, who scoffs at her request for aid in investigating the Bay Harbor Butcher resurgence. He is still bitter. She tells him she has a list of Miami personal that have boats. He tells her he's got an alibi and basically says her theory is crazy, and sends her away.

Much more pressing is Dexter's visit to a firing range alongside hired assassin, Oleg, who quietly has a knife shoved into his back and out his sternum while zeroing his new rifle. Dexter informs Isaak of his success, adding that Caffrey will likely track him down, and offering himself up as bait. Dexter next meets with Deb for an update on Jurg's whereabouts, as Deb gently presses as his sister that he'll never be entirely safe with a killer like Hannah.

Caffrey drops by the club and George Novikov tells him about Dexter.

Dexter drops by Isaak's place looking for information about Hannah's whereabouts. He's able to video chat with her and texts himself a screenshot. After hanging up Isaak asks him why he seemed so emotionally distant with Hannah. This leads to Dexter pointing out that Isaak is worried that he's actually the one responsible for Vickor's death.

George takes Nadia out of the club for sex.

Dexter sees in Isaak similarities to how he felt after Rita died. He's not sure if he'll be able to recover if Hannah is killed because of him. Dexter spots a signed soccer ball behind Hannah. It's the signature of a Columbian superstar, indicating that Isaak's bodyguard has Hannah in the home of one of the Columbians Isaak had earlier killed.

Dexter is called to the scene of another burn victim. Caffrey is there watching from the crowd. This victim is burned with the same accelerant as the last one. He's in an elevator and Dexter and investigator Bosso find an imprint that seems to indicate somebody watched the person die. There is also the name "Bobby" written on the inside of the elevator door. Dexter tells Debra about Hannah perhaps being held at one of the dead men's homes and she agrees to look into it. Dexter calls Isaak, who tells him to lead Caffrey to a ship.

Quinn shows up at the club and learns that Nadia had forced sex with George. This leads to him throwing George through a window and punching him repeatedly in the face.

Debra learns only one of the Colombians was single and she's going to his apartment. Dexter leads Caffrey onto the boat where Isaak is waiting to kill him.

Matthews tracks Maria down. He says he'll help her if she helps him get back on the force long enough to get his full forty-year pension.

Jurg begins to choke on Hannah's food, not poison, but too much pepper. She smashes him over the head with a blender and the two struggle in the floor. He stabs her in the stomach and she drills him in the face with a lamp. Hannah, still chained to the couch, falls to the ground.

After disposing of Caffrey's body over the side, Dexter and Isaak mutually throw their weapons into the water as a show of detente. Dexter lingers behind to clean up the blood and Isaak leaves. On his way off the ship he runs into George who shoots him the stomach and takes off. Dexter rushes to Isaak's side. Isaak tells him he's going to die and asks for a favor.

Debra finds Hannah on the floor. After a second of hesitation, she calls for an ambulance.

Dexter takes Isaak to where he had disposed of Viktor's body. Isaak tells him what he had with Viktor was worth all the trouble and advises Dexter to be less detached emotionally. Isaak dies.

Hannah, who seems okay, tells Debra what happened. Debra makes no attempt to conceal her dislike and distrust of Hannah. She asks why Debra didn't just leave her to die. Debra says she was just doing her job. Dexter arrives at the hospital room and grabs Hannah's hands. He tells her that was the most scared he'd been since the death of his mother. Dexter tells her that when he's with her, he feels safe. 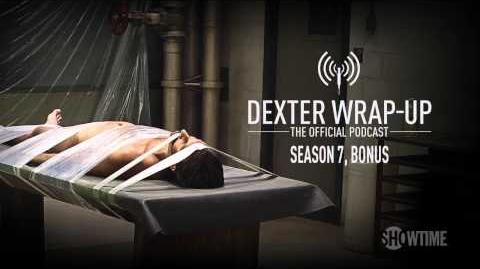 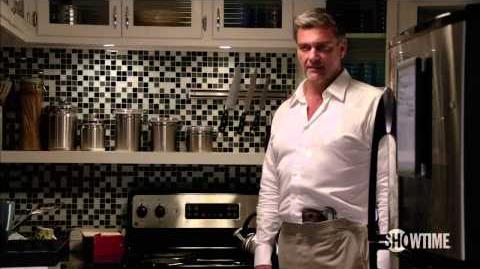 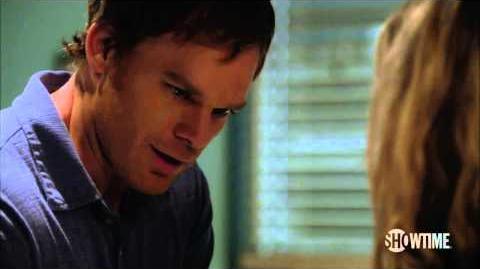 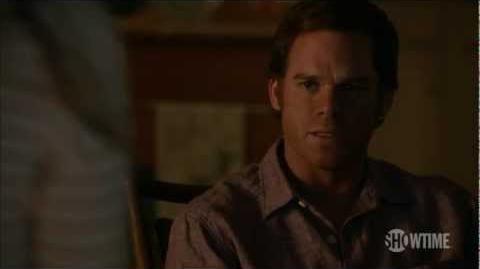