Clyde Phillips
Argentina is the eighth of twelve episodes in Season Seven of DEXTER, and the eightieth overall episode of the series. Directed by Romeo Tirone and written by Arika Lisanne Mittman, it first aired 18 November 2012.

The estimated number of viewers for the episode during its original airing was 2.25 million.[1]

Dexter tries to keep Debra in the dark about his relationship with Hannah, but a surprise visit from Astor, Cody and Harrison throws a wrench into his plans. Fresh out of jail, Isaak renews his pursuit of Dexter while Quinn continues his power struggle with the Koshkas.

Dexter and Hannah are making and having breakfast together. They agree to "not see each other again" tomorrow night, too.

Dexter goes to visit Deb at her house and talk to her about her call to him the night before. Deb has already vetted Hannah for him, but its all circumstantial. He says he's not killing Hannah and Deb tries to argue the point. They're interrupted by a text from Astor. Dexter then firmly states that he won't let her dictate his Code.

Isaak and George meet. George tries to get Isaak to forget about his vendetta with Dexter but apparently that was a fruitless attempt.

Dexter lets Harry know what's going on. He drops his phone just in time to not get shot by Isaak who is firing into the store from the street. Dexter finds out all three kids need to return to Miami because grandpa needs surgery.

Dexter tells Debra to let him handle Isaak. He tells her about the kids coming to town and she agrees to let them stay at her place with patrol security. Debra is planning to pay Hannah a visit. Maria tells Debra she's leaving for some business on the other side of town. Angel has finally managed to open his restaurant.

Debra promises Hannah that she's going to uncover all of her secrets.

George seems to be on the phone with the higher-ups in the Ukraine about Isaak being a problem. After hanging up he pops his head into Quinn's car and tells him he has money for him if he does one more job. Quinn tells him to go to hell.

While following Isaak Dexter gets a call from Jamie that they are three hours away. The plan is for them to meet at Angel's place. Dexter breaks into Isaak's place and runs into a guy who was there to kill Isaak. Dexter ends up cutting his throat.

Maria has a man at the Coral Cove Marina run some names. Dexter comes up and he tells her that he got rid of his slip in 2007 with eight months to go on his lease and he moved out in May of 2007.

The kids have dinner at Angel's restaurant. Astor and Cody are at each other's throats. It comes out that Astor has been smoking pot occasionally. He and Debra talk to her about the problem with "vices."

Later on, Debra thanks Dexter for his advice on Hannah. She knows it was hard to resist and appreciates him caring and not killing her because she asked. She assumed he was obeying her wishes.

Dexter goes to see Hannah. He tells her about the Ukrainian mafia wanting to kill him and him needing to kill Isaak first. Hannah suggests he learn what makes the guy tick, even offering him her van to use for surveillance. Dexter enjoys being able to talk to somebody about his kills.

Nadia makes Quinn promise he'll never do anything for George again. She takes a shower and George knocks on the door. He shows Quinn that he has audio of him agreeing to get rid of the evidence on Isaak. George wants him to help supervise some product being moved.

Isaak comes home to find the dead man. He realizes the man was there on behalf of George, meaning George has gotten approval from Kiev. Isaak realizes he's a dead man in the eyes of the Brotherhood. It's basically just him and his bodyguard all alone. They call the police.

Miami Metro comes to process the scene while Isaak sits on the couch.

Dexter joins Jamie and the kids at the beach. He has a talk with Astor about her not feeling like she has a home anymore. Hannah calls Dexter to get a house key and ends up meeting him there. She wasn't aware he had kids and seems jealous the he left that part of his life out of their conversations. She wishes she could live a normal life and have a family.

That night Debra spots Hannah's key chain and realizes Dexter has a relationship with her. This leads to a huge argument. Debra gets emotional and lets it slip that on the night she found him in the church she was going to tell him she was in love with him. Dexter is shocked and isn't sure what she means. Debra isn't sure either, but thinks she's even more screwed-up than her serial killer brother.

Dexter follows Isaak and his police escort to a bar. It turns out to be a gay bar and Isaak tells Dexter that Viktor was his lover. Dexter took from him the only thing that really mattered. The two talk about being outliers in society and Isaak thinks under different circumstances they could have been friends.

Maria looks as if she's getting close to connecting the dots on Dexter. Astor shares a joint with Debra.

Dexter reflects on the situation while in the arms of Hannah. 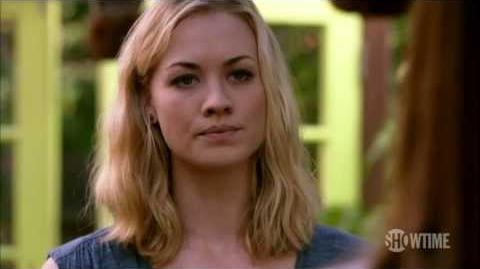 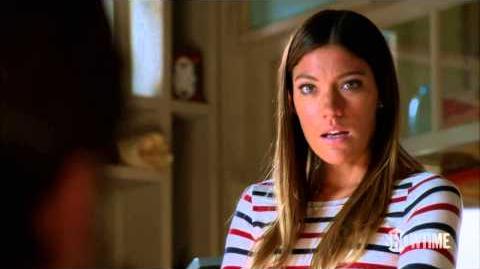 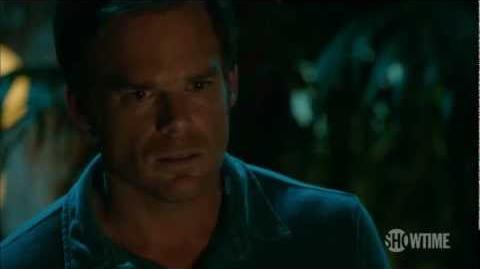 In Love
In Love 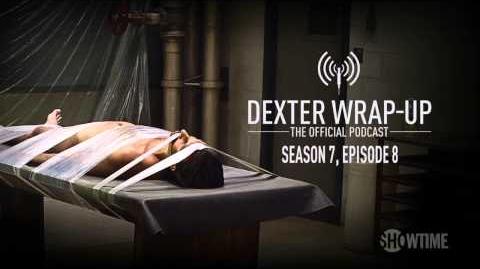