Clyde Phillips
Swim Deep[1] is the fifth of twelve episodes in Season Seven of DEXTER, and the seventy-seventh overall episode of the series. Directed by Ernest Dickerson and written by Scott Reynolds, it first aired 28 October 2012 on Showtime.

The estimated number of viewers for the episode during its original airing was 2.28 million.[2]

While trying to uncover why someone was killed on his boat, Dexter must out-maneuver a vengeful Isaak Sirko. New leads are brought to light on the Wayne Randall case by Hannah McKay, Randall's alluring former accomplice who Dexter discovers has a secret.

While Dexter cleans his boat, he spots some recent blood. Upon further examination with Luminol, he discovers even more blood. Knowing he never leaves a mess like this behind, Dexter concludes that someone was killed on his boat, someone he didn't kill.

Back at Miami Metro, Masuka discovers from a colleague that LaGuerta is processing a blood slide at another lab and tells Deb it is from the church crime scene where Travis Marshall was killed. When Deb questions Maria, she tells Deb she now has doubts that James Doakes was the  Bay Harbor Butcher since the blood slide she found at the crime scene contains Travis Marshall's blood.

Meanwhile, Dexter is both shocked and confused to discover that analyzed blood he found on his boat belongs to Louis Greene. Debra tells Dexter that LaGuerta found a blood slide at the Travis Marshall crime scene and is going to keep assist her to keep tabs on the investigation. Dexter tell her not to get  involved, but she refuses. Deb shows him a list of names of friends and family LaGuerta plans on interviewing and asks if he any of the names were his victims. Dexter informs the list contains three of his victims and out of those three, Phillip Barnes is the only one whose family is in Miami. Dexter insists he cannot be tied to Barnes, but Deb isn’t so sure since Dexter stalked him at a wedding reception and he could have been photographed while there.

Dexter returns home but before he can open his door,he notices his curtains are open and since Jamie and Harrison are gone, he realizes someone was in his apartment, and still might be there. He then calls his house phone and disguises his voice pretending to be a friend of Dexter's calling to confirm a  meet with him. Isaak , who is waiting in Dexter's apartment planning on kidnapping Dexter and torturing him, overhears the voice message and heads to the meeting place. Dexter recognizes Isaak from The Fox Hole strip bar owned by the Koshka Brotherhood and  surmises that they might have figured out he killed Viktor, and sent a hit man after him.

When Isaak arrives at the faux meeting, Dexter calls him. Isaak tells Dexter  he is aware that Dexter killed Viktor and is out for revenge. Isaak says he won't stop with just killing Dexter. He believes there is a police conspiracy involved and he will kill any cops who were part of it, including Debra.

Dexter tells Debra that he killed Viktor Baskov for killing Mike Anderson. Deb is angry at Dexter for withholding evidence from the police (Viktor's fingerprint Dexter found at the crime scene) just so he can go after Viktor himself. Deb makes Dexter promise never to withhold evidence from an active case again. After realizing the severity of Isaak's threat, Deb reluctantly agrees to go into hiding together.

Dexter stakes out the club in an effort to get rid of Isaak, but before he can, Angel calls him into Miami Metro after Hannah McKay has just agreed to discuss where other bodies might be buried during the road trip she took with Wayne Randall.

Deb and LaGuerta arrive at Phillip Barnes's house and interview his son who allows them to examine photographs  Barnes took at the wedding reception on the day he was killed; After examining a few photographs, Deb comes across a photo showing Dexter in the background and casually tells LGuerta that she will personally look over the photos back at the station.

Hannah leads the police to a dead couple buried and claims Wayne alone killed them but Dexter has conclusive evidence that Hannah killed the woman, despite Hannah firmly denying the accusations. Since the D.A. gave her immunity for any crime she committed with Wayne, she can't be tried for it anyway. Dexter doesn't inform the police of his findings.

Knowing the Koshka Brotherhood are enemies to the Columbians, Dexter tricks Isaak into following him to a Columbian hangout called Mateo's Bar. Dexter believes that Isaak will be killed on sight, but instead Isaak kills them and gets away with only minor wounds. Dexter finds blood left behind at the crime scene that belongs to Isaak and hatches a plan to have him arrested.

After Isaak discovers Quinn is a dirty cop and can be paid off to leave them alone, the Koshka Brotherhood leaves a bag of money in Quinns car. Back at Miami Metro, Isaak is arrested for the murders at the Columbian bar. Angel confronts Deb and tells her that he believes Viktor killed Mike Anderson but she tells Angel to back down.

Dexter comes face to face with Isaak in lockup, where Isaak insists it isn't over.

Deb comes over to Dexter's apartment and gives the incriminating photo she found to Dexter who later burns it. 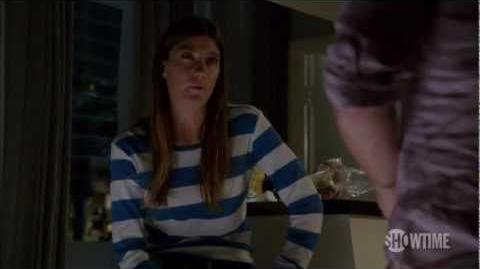 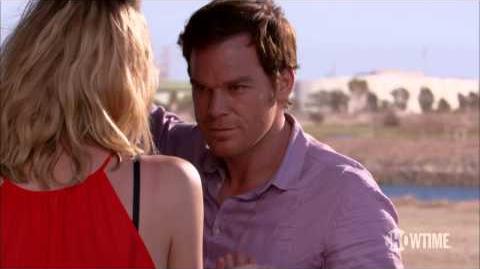 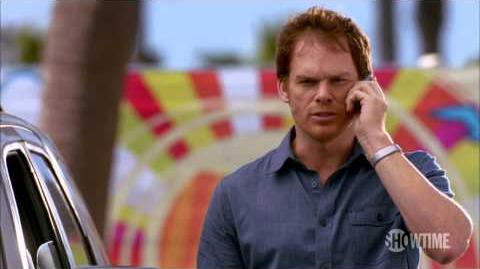 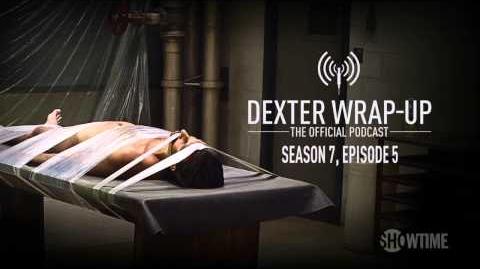